Louis was born in 1839. He was the son of John-Baptiste Londroche and Josette Manaigre.

On 15 Feb 1863, while camped in Tennessee, Louis Londrosh and a party of other soldiers from Co. H, 2d Minnesota Inf., embarked on a detail to forage for feed for the mules. They set out with a 10 wagon train. This small group split up, and a 4 wagon train headed towards a small hill where there was a small corn crib. As they were loading, a force from the Sixth Alabama Cavalry approached. Seeing that they were few in number, the Confederates demanded that the forage party surrender, but were greeted with insults and gunfire instead. Sgt. Holmes, in charge of the little expedition, shouted, "We can die, but we’ll never surrender!” The small crib in which they were holed up received a hail of lead from the 125 enemy cavalrymen. Miraculously, only three were wounded. The regiment, hearing the noise, quickly dispatched to the scene, and the enemy cavalry retreated, but not before the men dashed out of the crib killing two rebels and their horses, and wounding several more. Three were taken prisoners and three of their horses were rounded up. At the time of their relief, the men had only 8 rounds left apiece. This incident received quite a bit of attention at the time.

Due to government oversight, it wasn’t until 1897 that the men from
the Corn Crib Party were given a Congressional Medal of Honor for
most distinguished gallantry in action during the Civil War. Eight men
received the award were Joseph Burger, William Clark, James Flannigan,
Milton Hanna, Lovilo Holmes, Byron Pay, John Vale and Samuel Wright.
Others who were entitled to the award, but did not receive it because
they had died before 1897 or not able to be located were: Homer Barnard
died in 1864, Nelson Crandall and Charles Kraus died at Chattanooga
in 1864, and Samuel Louden was killed at Missionary Ridge in 1863.
Louis Loundrosh died at St. Clair, MN after the war, Charles Liscom
and Samuel Leslie were unable to be located. (Schrader, pt 1)

Louis Londrosh had the following children with Mary St. Cyr:

He passed away on 28 July 1880 of tuberculosis (1880 census, Report of Deaths, Shrader, pt. 2), and is buried at Lone Cedar Cemetery, Sherburn, Martin County, Minnesota, USA. (Find a Grave)

The Second Minnesota at Missionary Ridge 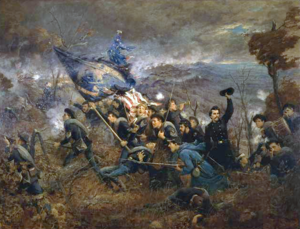 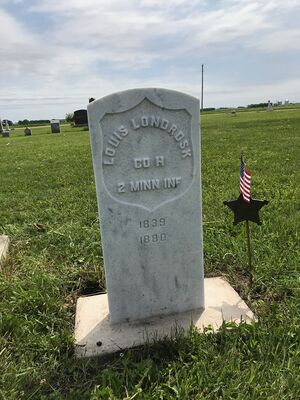 Report of Deaths Registered in the County of Martin (Minnesota), p. 40. 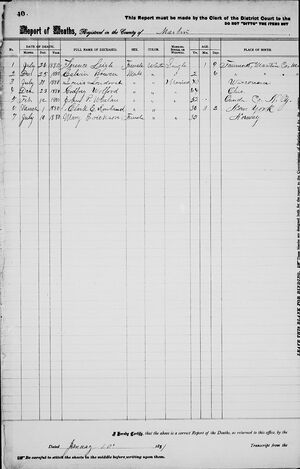