Alvin Long was a homesteader in Oklahoma. Join the Homesteaders Project.

Alvin Porter Long was born in Indiana on 17 July 1867 to Edward McCauley and Cordelia McIntoch Long. Just two days before his twelfth birthday Alvin's father was shot in the back, as he was coming home from work. Edward Long was shot on the Missouri River bridge. Alvin's father was a civil war veteran, and his mother received a pension. No one knows much about Alvin's childhood. What is known about Alvin's life starts when he is 26 years old, and he joins the land run for the Cherokee Strip on 16 Sep 1893. It was told that he had a sulky and a fast horse and was able to find a good area to homestead with timberland. This area subsisted of 160 acres just outside of Ringwood, Oklahoma Territory. He was not well versed in farming and surviving in this rugged land was not easy, and Alvin became ill. A neighbor lady, Phoebe Palestine Morris, learned about his plight. She nursed him back to health, and he soon married her. She had family that had also made the land run with her, so he now had a helpmate to survive the hard times ahead. Together they had twelve children, and they all survived mainly by raising hogs and living on hog meat. Alvin P. Long had nicknames for all of his children and never called them by their given name. In his later years he enjoyed taking the wagon into Enid and watching the court trials. Alvin was very good with a gun, and he shot from the hip. Alvin P. Long had a heat stroke in his younger years, and it is believed that it was a stroke that cause his death at age 72 on 28 March 1940. He is buried in Square Cedar cemetery next to her wife Phoebe.


Memories: 1
Enter a personal reminiscence or story.
Alexis (Lovelace) Nelson
My great grandfather Alvin Porter Long must have certainly felt out of place. He was born in Indiana in 1867, and when he was only 12 his father was shot and killed one evening crossing the Missouri River bridge. Alvin’s whereabouts is uncertain until he made the 1893 Land Run for the Cherokee Strip. He knew nothing about farming, and became ill living all alone in Oklahoma Territory. He was nursed back to health by a neighbor lady that he soon married. His children suspected that he was associated with horse thieves, as they could hear men and horses in the night that were gone in the morning. I can only guess that by being so out of place he survived anyway he could.
posted 17 Apr 2019 by Alexis (Lovelace) Nelson   [thank Alexis]
Login to add a memory.
Is Alvin your ancestor? Please don't go away!

ask our community of genealogists a question.
Sponsored Search by Ancestry.com
DNA Connections
It may be possible to confirm family relationships with Alvin by comparing test results with other carriers of his Y-chromosome or his mother's mitochondrial DNA. However, there are no known yDNA or mtDNA test-takers in his direct paternal or maternal line. It is likely that these autosomal DNA test-takers will share DNA with Alvin: 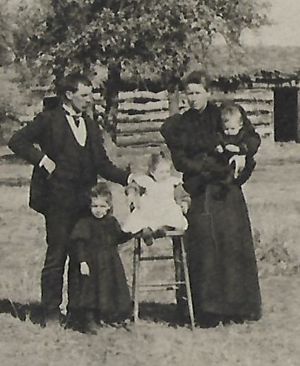 Alvin Porter Long with his dog 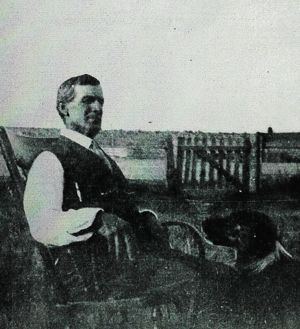 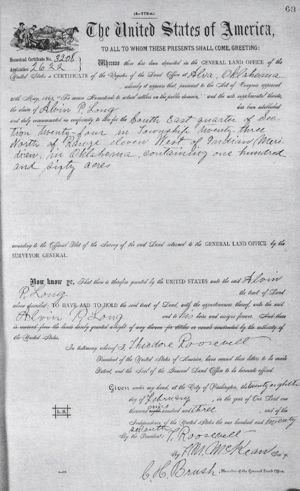 Alvin Porter Long with his twelve children on the day of their mother's funeral. 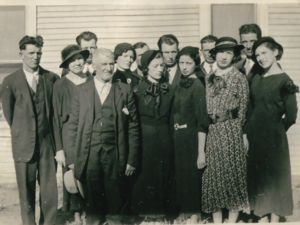 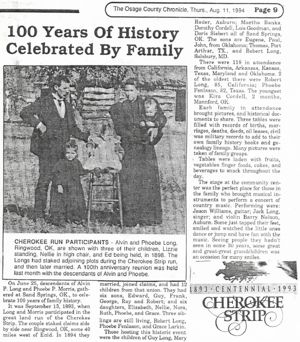 From what I understand, the Homesteaders already set up all of the state categories for the project.I don't believe they used the "pre-state" territory names. You can ask someone from the project though. The idea seems to be that "here is our state...here is who homesteaded here."

I changed the category in the template to reflect this. Natalie, Categorization

Alvin is 23 degrees from Danielle Liard, 17 degrees from Jack London and 18 degrees from Henry VIII of England on our single family tree. Login to find your connection.