Henry Wadsworth Longfellow (February 27, 1807 – March 24, 1882) was an American poet and educator whose works include "Paul Revere's Ride", The Song of Hiawatha, and Evangeline. He was also the first American to translate Dante Alighieri's The Divine Comedy and was one of the five Fireside Poets.

Longfellow was born in Portland, Maine, which was then a part of Massachusetts. He studied at Bowdoin College. After spending time in Europe he became a professor at Bowdoin and, later, at Harvard College. His first major poetry collections were Voices of the Night (1839) and Ballads and Other Poems (1841). Longfellow retired from teaching in 1854 to focus on his writing, living the remainder of his life in Cambridge, Massachusetts, in a former headquarters of George Washington. His first wife Mary Potter died in 1835 after a miscarriage. His second wife Frances Appleton died in 1861 after sustaining burns when her dress caught fire. After her death, Longfellow had difficulty writing poetry for a time and focused on his translation. He died in 1882.

Longfellow wrote predominantly lyric poems, known for their musicality and often presenting stories of mythology and legend. He became the most popular American poet of his day and also had success overseas. He has been criticized, however, for imitating European styles and writing specifically for the masses.[1]

Every school child in America knows the opening lines of Longfellow's THE MIDNIGHT RIDE OF PAUL REVERE and most have had to read HIAWATHA. Has anyone ever said to you, "Into each life some rain must fall. That's Henry's.

Henry Wadsworth Longfellow was born 27 February, 1807 in Portland, Maine. He was one of the five members of the group known as the Fireside Poets. He published numerous works including Paul Revere's Ride, The Song of Hiawatha, Evangeline and The Courtship of Miles Standish.

In 1822, Longfellow, only 15 at the time, enrolled at Bowdin College in Brunswick, Maine. There, he met Nathaniel Hawthorne who would become a lifelong friend. In his senior year he wrote to his father, using his powerful and evocative language for which he would become famous:

"I will not disguise it in the least. The fact is, I most eagerly aspire after future eminence in literature, my whole soul burns most ardently after it, and every earthly thought centres in it. I am almost confident in believing, that if I can ever rise in the world it must be by the exercise of my talents in the wide field of literature."

By the time he graduated, he had already published numerous minor poems in man publications. He was soon offered a job as a professor at his alma mater. Before taking the job, he began a tour of Europe. There, he met Washington Irving, who greatly inspired Wadsworth Longfellow to write. Unfortunately, he learned that while he was away, his sister Elizabeth had died of tuberculosis at only 20 years old.

On 27 August, 1829, he turned down the position at Bowdin due to the low salary of $600. The trustees would later raise his salary to $800 with an additional $100 to serve as the librarian. Wadsworth Longfellow decided to take the job and spent many years at the position, being published and gaining notoriety during that time.

On 14 September, 1831, Wadsworth Longfellow married Mary Storer Potter. They settled in Brunswick. He continued to write and published more pieces in 1833.

Wadsworth Longfellow began his long courtship of Frances "Fanny" Appleton after his return to America. He continued to work at Harvard and publish his work during his 7-year courtship. Finally, in 1843, Appleton agreed to marry him. To excited to wait for the carriage, he walked an hour and a half to meet her at her house. As a wedding present, Nathan Appleton bought the Craigie House where Wadsworth Longfellow had been staying and gave it to the couple. Wadsworth Longfellow would spend the rest of his days there.

He and Fanny would go on to have six children. By 1850 he was making substantial money from his writing. Enough so that he retired from his job at Harvard and devoted his time entirely to his writing.

On 9 July, 1861, Fanny was sealing envelopes containing locks of her children's hair with hot wax. While it is unclear exactly what happened, Fanny's dress caught fire. Woken from his nearby nap, Wadsworth Longfellow rushed to help her, but she was already seriously burned. While they waited for the doctor, she lapsed in and out of consciousness. She died the next morning shortly after requesting a cup of coffee.

During his attempt to save her, Wadsworth Longfellow was badly burned himself. So badly that he was unable to attend her funeral. His facial burns were so bad that he stopped shaving, resulting in his trademark beard.

Henry Wadsworth Longfellow, wracked by grief, never fully recovered. He resorted to drugs such as ether to dull the pain and later wrote The Cross of Snow to express his grief.

The Rainy Day The day is cold, and dark, and dreary
It rains, and the wind is never weary;
The vine still clings to the mouldering wall,
But at every gust the dead leaves fall,
And the day is dark and dreary.

My life is cold, and dark, and dreary;
It rains, and the wind is never weary;
My thoughts still cling to the mouldering Past,
But the hopes of youth fall thick in the blast,
And the days are dark and dreary.

Be still, sad heart! and cease repining;
Behind the clouds is the sun still shining:
Thy fate is the common fate of all,
Into each life some rain must fall,
Some days must be dark and dreary.

A Psalm of Life Tell me not, in mournful numbers,
Life is but an empty dream!
For the soul is dead that slumbers,
And things are not what they seem.

Life is real! Life is earnest!
And the grave is not its goal;
Dust thou art, to dust returnest,
Was not spoken of the soul.

Not enjoyment, and not sorrow,
Is our destined end or way;
But to act, that each to-morrow
Find us farther than to-day.

Art is long, and Time is fleeting,
And our hearts, though stout and brave,
Still, like muffled drums, are beating
Funeral marches to the grave.

In the world's broad field of battle,
In the bivouac of Life,
Be not like dumb, driven cattle!
Be a hero in the strife!

Trust no Future, howe'er pleasant!
Let the dead Past bury its dead!
Act-act in the living Present!
Heart within, and God o'erhead!


Lives of great men all remind us
We can make our lives sublime,
And, departing, leave behind us
Footprints in the sands of time;

Let us, then, be up and doing,
With a heart for any fate;
Still achieving, still pursuing,
Learn to labor and to wait.

ask our community of genealogists a question.
Sponsored Search by Ancestry.com
DNA
No known carriers of Henry Wadsworth's DNA have taken a DNA test. 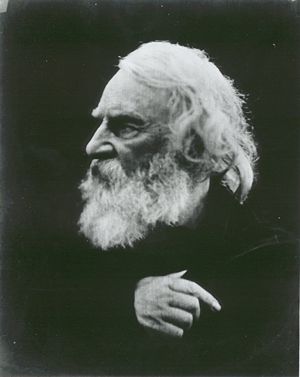 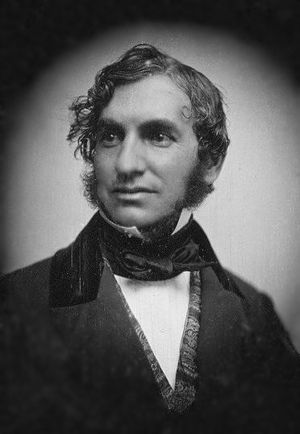 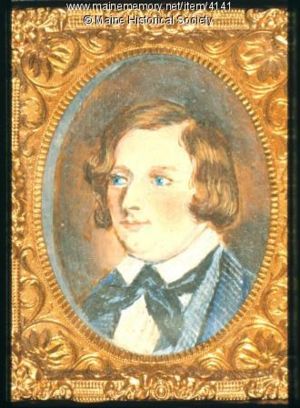 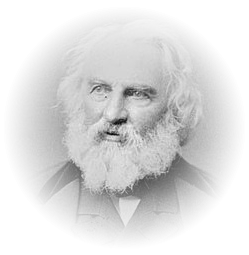 He is buried in same cemetery as son Charles

Andrew Simpier
I believe his first wife’s LNAB is Potter not Storer but the pm would have to edit.
posted Dec 14, 2020 by Andrew Simpier

Ellen Smith
It does appear that her name was Mary Storer Potter, but before we start changing LNABs, it would be good for the facts of her profile to be tied to sources more reliable (or authoritative) than Findagrave.
posted Dec 14, 2020 by Ellen Smith

I’ll see what I can find for sources.

T Stanton
Someone has entered on the profile of Edmund Rice that he is an ancestor of Longfellow. I have found no evidence of this at all. Do any of the PMs for this profile know if that can be substantiated in any manner. As of today WikiTree finds no relationship between the two within 30 generations.
posted Feb 05, 2019 by T Stanton

Robin Coles
Fantastic Job.
posted May 27, 2018 by Robin Coles
[Living Evans]
poems to be done under titles THE RAINY DAY and A PSALM OF LIFE
posted Aug 14, 2013 by [Living Evans]