Thomas Lord, the son of Richard Lord, of Towcester, Northamptonshire, England, was born about 1585.[1] Anderson gives no name for the mother of Thomas Lord.[1] The surname of Thomas Lord's mother is not stated by Flagg, Lord, Crowell, Barbour, or Jacobus, who all state her given name is Joan. [2][3][4] [5][6] In the will of Thomas Lord's father Richard Lord, he names his wife Joan (no maiden name for her), and his son Thomas.[3]

Thomas & Dorothy (Bird) Lord were the parents of at least nine children, all born in England.

Thomas Lord & Dorothy and their children Thomas, Ann, William, John, Robert, Amy and Dorothy, on 29 April 1635, "were enrolled at London as passengers for New England on the ship Elizabeth and Ann.[1][2][8][9]

They landed at Boston and joined Richard Lord, (the eldest son who went in 1632 to prepare the way for them), at Cambridge, Massachusetts Bay Colony.[3] [Hotten 72; Lord Gen 1-6].

A Founder of Hartford, Connecticut

"In 1639 his home was on the highway on the bank of the Little River (Now Wells Street) and he owned eight other parcels of land; he was a man of Position and Influence."[3]

On the list for the Elizabeth and Ann, Thomas is shown as a smith.

There is no record of Thomas's death, however he was given property by Hartford in February 1641/2, and his wife Dorothy sold property without his participation in March 1652/3. Anderson surmises that he died soon after January 29, 1643/4, when he was relieved on common work on the roads.[11]

Thomas Lord, Sr.'s name is on the Founder's Monument in the Ancient Cemetery at Hartford, Connecticut, where he is buried.[10]

IN MEMORY OF
MR. THOMAS LORD
BORN 1585. ONE OF YE
ORIGINAL PROPRIETORS
OF HARTFORD[12]

Please do not copy data from this FindaGrave memorial#11290361 - wrong facts as of 20 Jan 2018. Corrections and sources submitted to FindaGrave for editing. No marriage of Dorothy Bulkeley to Thomas Lord - all children from marriage to Dorothy Bird, see Great Migration source above. 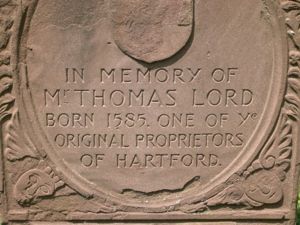 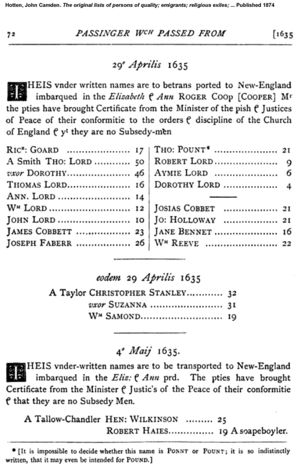 Raymond Watts PhD
A child seems to be missing from this profile. Sarah Lord's probate record<ref>Manwaring, Charles W. A digest of the early Connecticut probate records. Hartford: R. S. Peck & Co., 1904. v 3 p 216. Archive.org link</ref> lists siblings, nieces, and nephews that all fit in this family.
posted Aug 18, 2021 by Raymond Watts PhD
Chris Hoyt
What child is missing? Dorothy Lord's will is on the same page and I don't see an additional child.
posted Aug 18, 2021 by Chris Hoyt

Raymond Watts PhD
Sarah herself is not listed in Thomas’ profile. The bio states that there were nine children, but only eight are listed in the Children section and attached as WikiTree profiles. It is curious that Sarah is not mentioned in Dorothy’s will. Sarah seems to be the only unmarried daughter of the family and may have been gifted property from her parents before Dorothy’s will. This bears further study, especially examination of Thomas Jr’s (Sarah’s father’s) will and land records.
posted Aug 19, 2021 by Raymond Watts PhD
Chris Hoyt
Isn't the Sarah Lord who wrote her will in Aug., 1676 the widow of Richard Lord and thus daughter-in-law to Dorothy. She names among many others, her children, son Richard Lord and her daughter Sarah Haines?
posted Aug 20, 2021 by Chris Hoyt

Raymond Watts PhD
Thanks, Chris, you are right. I was misled (again!) by casual calling "brother" what we would call "brother in law."
posted Aug 20, 2021 by Raymond Watts PhD

S (Hill) Willson
What is really odd is that its removal doesn't show up in the Changes log. This seems very unusual, considering the marriage info was only added in 2020. I wonder what happened...?
posted May 13, 2021 by S (Hill) Willson

Anne B
Lord-4752 and Lord-5 appear to represent the same person because: Lord-4752 was a conglomerate of three men. He is stabilized to Thomas. Please merge.
posted Oct 20, 2019 by Anne B

Anne B
Changing profile to facilitate merge.
posted Oct 20, 2019 by Anne B

Anne B
Who is this Anthony Lord? I do not find him in Flagg's Genealogical Notes or The Planters of the Commonwealth cited as sources. He is not listed in Anderson's Great Migration Directory, Savage's Genealogical Dictionary, or Colket's Founders of Early American Families. He is not listed as having died on that date in Hartford, nor is he found in the Connecticut Colonial records. A Thomas Lord b. 1585 was a Founder of Hartford. His son William Lord died on 17 May 1678. It seems he is a conglomeration of persons.
posted Sep 08, 2019 by Anne B

Susan (Emens) Hughes
I just created a free space page for the Thomas Lord genealogy source. Someone might want to add the link to it in the 'See also' section:

Jillaine Smith
This profile has an unusually high number of profile managers. If youre not actively researching this profile please consider shifting from PM to Trusted List. Youll still be notified of changes to the profile. Thank you.
posted Jan 31, 2018 by Jillaine Smith

Robert Haviland
Great profile! Nice to see a pre-1700 profile that doesn't have artifacts and errors from past merges and gedcoms.

A couple of recommendations . . what do you think? 1) Move the negatives (like who he is NOT married to from the Marriage heading into a Research Notes or Common Errors to Avoid section. 2) Why is the colon for the Occupation (Merchant, Mill Owner) showing? 3) Should any of the sources be in a See Also section? Were all these sources used in the profile? 4) There may not be a Towchester, but there is a Towcester in Northamptonshire.