Birth: about 1555,[3] "perhaps from a family of Yelvertoft, Northamptonshire.[3]

Marriage: About 1582 (estimated), to Joan (LNAB unknown), who is named in Richard's will.[2] Joan, wife of Richard Lord, was buried at Towcester on 22 Sept 1610, about four months after Richard named her in his will, and three weeks before the death of Richard Lord.[3][2]

Richard Lord calls himself a "Husbandman of Towcester" in his will written 1610.[2]
Occupation: Yeoman[4]

Burial: 16 Oct 1610, [2] St. Lawrence Churchyard, Towcester, Northampton, England[2] [2][5]In the first paragraph of the will (1610) of Richard Lord, he requested burial in the churchyard, and the first item in Richard Lord's will was a donation of money to the parish church of Towcester.

St. Lawrence's Church, standing in the middle of Towcester, is a 12th-century Norman building.

"Its ecclesiastical heritage may well relate back to Roman times as St Lawrence was patron saint of the Roman legions. The building was reconstructed in the perpendicular style 1480–85 when the church tower was added. Permission to quarry stone for this restoration from Whittlewood Forest was granted by Edward IV..." Towcester, Wikipedia.org, Creative Commons Attribution-ShareAlike License. 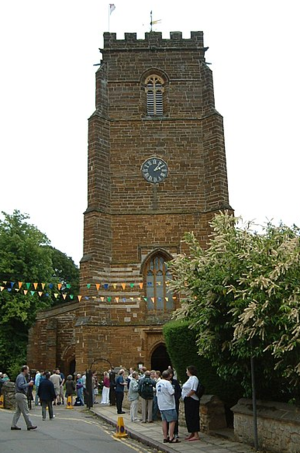 Leave a message for others who see this profile.
There are no comments yet.
Login to post a comment.
Kirk Hess
Hi - I think we can add better sources to this profile - the town is Towcester not Towchester, went ahead an fixed that.
posted Apr 25, 2016 by Kirk Hess

Mags Gaulden
Hello Everyone. I have finally gotten back round to our Lords. Mags
posted May 23, 2014 by Mags Gaulden

I am descended from William Lord, Sr, of Yelvertoft, England, and of this Richard Lord, of Towchester, Northhampton, England, who was a Lt. (Yeoman) in the English Army and who is buried in the Churchyard at Towchester. I have information and sources to add to this profile. Not today but upcoming, so I wanted to let you know. Mags