Hydesville: the story of the Rochester knockings, which proclaimed the advent of modern spiritualism by Todd, Thomas Olman

I first heard this noise one week ago last Saturday evening. I have heard Mr. Storer's statement above, in regard to what occurred on that night, and the same is true and correct. I heard the same sounds in answer to the same questions, of which he has spoken. I went into the cellar with Carlos Hyde, George Bridger, and Ezekiel Dailey. Mr. Duesler was up above in the bedroom asking questions. He told all those in the cellar but one, to stand to one place, and then told that one (Mr. Hyde) to step about from one place to another, which was done, and Mr. Duesler at the same time asked the question, if there was any one over the place where its body was buried? This question was asked a number of times, as Mr. Hyde stepped about from one place to another, but there was no rapping in answer to it, until Mr. Hyde stood about in the center of the cellar, when the question was answered by several distinct raps. We all heard this noise or knocking. Mr. Duesler told us that Mr. Hyde was over the place, although he could not see us, nor had he any other means of knowing where he was than by the rapping. This was tried over a number of times, and with the same result. Mr. Duesler asked all of the questions in the same tone of voice, so that nothing could be indicated by that. I could not tell where this noise appeared to be, although it seemed to be in the cellar. I do not think it possible that this could be carried on by any person without being detected. I heard it after this. I was in the bedroom, with my hand on the bedstead. Mrs. Fox asked if--- ----murdered the man whose body was buried in the cellar? The rapping was very loud and plain; it seemed to jar the bedstead. I heard the same question asked by Mr. Duesler, and the same answer was given. I have not heard this noise since that evening.

Thanks to Jamie Jaskiewicz for starting this profile. Click the Changes tab for the details of contributions by Jamie and others.

Is Marvin your ancestor? Please don't go away!

ask our community of genealogists a question.
Sponsored Search by Ancestry.com
DNA Connections
It may be possible to confirm family relationships with Marvin by comparing test results with other carriers of his Y-chromosome or his mother's mitochondrial DNA. However, there are no known yDNA or mtDNA test-takers in his direct paternal or maternal line. It is likely that these autosomal DNA test-takers will share DNA with Marvin: 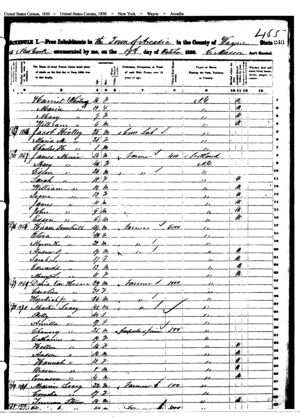 Marvin is 21 degrees from Katie Goodwin, 13 degrees from Wilbur Scoville and 14 degrees from Henry VIII of England on our single family tree. Login to find your connection.