Wakąjáhųka was born in 1863 near Humbird, Wisconsin. (Obit)

He preferred to call himself variously, "King Thunder" or "King of Thunder". This is a translation of the attested Hocąk Thunderbird Clan name, Wakąjáhųka, which is from Wakąjá, "Thunderbird"; hųk, "chief, boss, king"; and -ka, a definite article suffix used in personal names.

Casselman says (p.11): "John Stacy is of the Bear clan, one of Those-who-are-on-earth, and that Mrs. Stacy, a sister of King-of-Thunder, is of the Thunderbird clan, one of Those-who-are-above." So John Stacy and King of Thunder are brothers-in-law. This makes King of Thunder's sons and daughter's the nephews and nieces of John Stacy and his wife. In fact, the 1910 Federal census shows that Dora, Minnie, and Theodore, the children of Mary T. Lowe, were living with Martha and John Stacy, and are recorded as being their nieces and nephew. Since the marriage license of Dora Lowe records King of Thunder as her true father, it follows that he also fathered Minnie and Theodore. Mary T. Lowe, the mother of these children, was the second wife of King of Thunder, afterwards having been established as the "deserted" wife after the break up of polygamy.

King of Thunder was an important figure in the establishment of the Reformed Church among the Hocągara.

"Joseph Thunder King, more general known as King of Thunder passed away Sunday, July 28, at 1:00 a.m. at the old Mission, at Black River Falls where he served as an elder for many years. King of Thunder was born near Humbird in 1863, shortly after the Winnebago Indians tribes returned from the west where they were sent after the government took over their lands, their great love for home and freedom bringing them back to Wisconsin. He was one of the first four Winnebago Indians converted at the Mission under Rev. Jacob Stucki. The conversions were made in 1898, after twenty years of missionary work among these people. He was twice married and had a large number of children, grandchildren and great-grandchildren. About 20 years ago he began to suffer with eye trouble, being totally blind for the past eight years. His wife is blind also. Burial services were held at the Mission Church Wednesday afternoon, the Revs. Weidler, Bixler and Benj. Stucki taking a part in the rites. Interment was in the Mission Cemetery. Those accompanying Rev. Weidler to the services were Jacob Baumgartner, Mrs. Flornine Wiese, and John Michael." 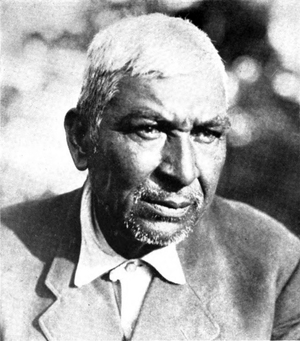 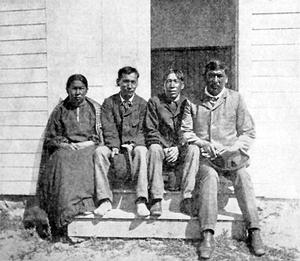