The photographer, Joe Rosenthal, is known for the famous photo of the flag being raised on Iwo Jima during World War II on Feb. 23, 1945. But the photographic skills of Marine Sgt. Lou Lowery also captured that first moment.

A group of Marines were ordered to raise the American flag on the top of an island hill. Marines Charles Lindberg, Harold Schrier, Boots Thomas, and Hank Hanson, along with Louis Carlo, James Michaels and Raymond Jacobs together with a detachment of other Marines were on hand that morning as an American flag was tied to a Japanese water pipe and raised at Iwo Jima.

Sgt. Lou Lowery, was a Marine photographer, clicked his camera taking photos from a ship offshore as men on board cheered with the flag's appearance. Only when a larger flag was needed for a second photo, did the photo by Rosenthal come about from an re-enactmentof the flag raising.

Sgt. Lou Lowery's photos of the first smaller flag raising were not developed until after the war. However, he did take the first actually photos of the American flag on Iwo Jima.

Lowery went on to be the photographic director for 'Leatherneck Magazine'. 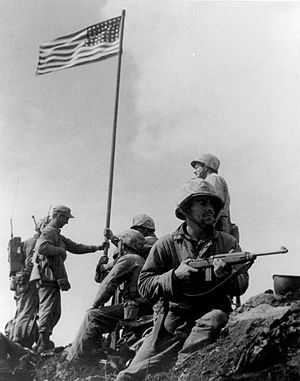 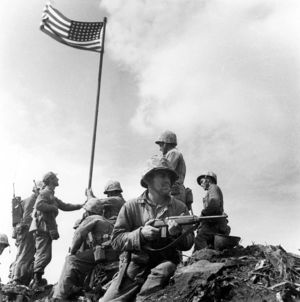