In 1835, Elizabeth and her father William (1792), brother William (1819) and sister Margaret boarded the ship the John Jay at Liverpool and crossed the ocean to New York. For some reason their mother Elizabeth did not accompany them. The family eventually settled in Dereham, Oxford, Ontario, Canada.

Elizabeth married James Scott March 25, 1850 in Brock, Ontario, Canada. Together they owned and farmed lot 10 Concession 12. Elizabeth and her brother William are listed together in the 1851 census with their spouses. There is also a John Lowrie, age 25 and an Agnes Lowrie age five, both listed as born in Scotland. It is uncertain what their relationship is to Elizabeth and her brother.

Sadly just nine years after their marriage (1859), James died. They did not have any children. Elizabeth continued to farm the land on her own for three years after James death.

January 1, 1862, Elizabeth married George Christie. It proved to be a rather turbulent time for her. In 1871, George is shown as living with a Jenett Christie age 47 and Maranna Christie age 13. In 1881 the census shows him living with Elizabeth (Lizzie) again. George is shown as a Farm Laborer. With each census and the marriage registration George's birthplace changes. One document says he was born in Ireland, another Quebec, yet another Ontario.

According to the Find A Grave site for George Reed Christie as recorded by Bruce Johnson: "By instrument #90188 and 94521 dated 24 May 1883, which related to a Grant of Anuity in trust by Elizabeth Christie to her husband George, secured by Lot 10 concession 12, Dereham Township; ...Whereas the said Elizabeth Christie and George R. Christie have by mutual concern separated and are living apart from each other ... Elizabeth agrees to give George $75 a year for life." This is signed by Elizabeth Christie and her neighbor as witness Thomas Flemming.

Just two years later in 1885 Elizabeth dies from stomach inflammation (ulcer??) and her will written 29 April 1881 and filed 14 April 1885 gives the land to her nephews Thomas and William Lowrie. George Christie's $75 a year abruptly stops.

Elizabeth is buried with her first husband James Scott in the St.Charles Anglican Church Cemetery.

ask our community of genealogists a question.
Sponsored Search by Ancestry.com
DNA Connections
It may be possible to confirm family relationships with Elizabeth by comparing test results with other carriers of her ancestors' mitochondrial DNA. However, there are no known mtDNA test-takers in her direct maternal line. It is likely that these autosomal DNA test-takers will share some percentage of DNA with Elizabeth: 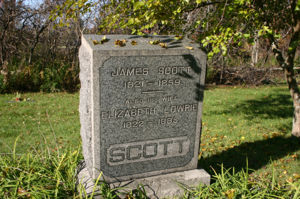