He was also a World War II spy. The FBI put him behind bars in 1936 for running a prostitution ring. Six years later, the U.S. navy began to have problems with sabotage at the New York docks.

The dockworkers were totally under the Mafia’s thumb, though, so they wouldn’t give any information to the authorities. The Navy came to Luciano and recruited him as an informant so he would use his leverage and help them get information. It worked – sabotage stopped – and Luciano was rewarded with his sentence being cut from 50 years to just 10 [2] provided he also agree to deportation to Italy. [3]

Luciano does not appear to have any documented offspring and multiple biographies report him as saying he did not want children as he feared they would bear the burden of his reputation as a gangster. [5] [6] [7]

Newark's book mentions a brother Giuseppe who is not mentioned in the 1920 US Census. The accuracy of Newark's book seems questionable at times (i.e. stating Igea died at the age of 36 in October 1958 when all other sources indicate her age at death as 37 and in September 1958). Another possible reference to this brother, Joseph, though, is from the Juniper Berry Magazine.

Is Charlie your ancestor? Please don't go away!

ask our community of genealogists a question.
Sponsored Search by Ancestry.com
DNA
No known carriers of Charlie's ancestors' DNA have taken a DNA test. 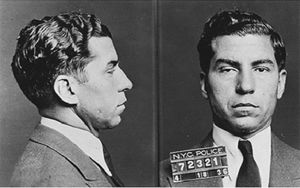