17th October 1912 - Albino Luciani was baptized the same day he was born, his baptism took place at home, and was performed by the midwife, as he was apparently in danger of death.[4]
19 October 1912 Albino's Baptism was formalized in the Church by the curate, Don Achille Ronzon[4]

1918 October - Albino started at elementary school.[4]This school would have been in his local area but the name of the school has not been identified.
1923 October - Albino is believed to have entered the minor seminary in Feltre. He can been seen in picture with colleagues at the seminary[5][4]. Feltre a town in the province of Belluno in Veneto, Northern Italy[6]
1928, Albino Luciani entered the Seminary of Belluno to commence his religious studies.[2]
1947 Doctorate in sacred theology from the Pontifical Gregorian University[1][5]

2 February 1935 - He was ordained[5] as a Priest to the Diaconate and on the
7 July 1935 to the Priesthood at the Church of San Pietro, Belluno, Italy

He was chaplain in the parish of his native town and then at the parish of Agordo, where he also taught religion at the Minerary Technical Institute.

1937, he was named as Vice-Rector/Deputy Director of the Seminary of Belluno Diocese. He was professor of Moral and Dogmatic Theology, Canon Law and History of the (sacred) Arts.[2][1]
1948 - A year after earning his Doctorate he was made Vicar-General of his diocese. Which Diocese?
1949 - he organized the Eucharistic Congress of Belluno[2]. His continuing concern with the teaching of church doctrine and wrote Catechetica in briciole (1949; “Catechism in Crumbs (breadcrumbs")[2] in order to instruct less-educated Roman Catholics.[1]
27 December 1958 His episcopal consecration occurred at St Peter's Basilica, Vatican City
15th December 1958[2] - he was appointed as Bishop of Vittorio Veneto.[1]
27 December 1958 - At St. Peter’s Basilica, he received the Episcopal consecration from His Holiness, Pope John XXIII. Apparently he spent the next 11 years developing his ministry in this diocese. Then in 1962, saw his participation in the Second Vatican Council begin.[2]
1969 He was made Archbishop of Venice[2][1]
1972 -1975 The Illustrissimi was originally published in Italian in the Italian Christian paper 'Messaggero di S. Antonio' In 1976 He published this creative work, as a book on or after his appointment to Cardinal. The Illustrissimi (“To the Illustrious Ones”), is a compilation of around 40 letters mainly to people in Italian history and fiction. They are addressed to figures such as Jesus and Mark Twain and to fictional characters such as those in Charles Dickens’s The Pickwick Papers.[7]
5 March 1973 - He was elevated to the Cardinalate[8] Did he reside in the Vatican from this point?
26th August 1978 Luciani was elected Pope, He was the first Pope apparently since Pius X (1903–14) to have a pastoral background rather than a diplomatic or scholarly background.[1] Better known as Pope John Paul I.

28 September 1978 His sudden death, the apparent result of a heart attack, led to rumours of foul play[1]. In the days before his funeral thousands walked past his body as it lay in state. His passing was mourned by the world.

Pope John Paul's funeral was held in St Peter's Square, in the Vatican City, Rome, Italy, at four p.m. on Wednesday, 4 October 1978
At his funeral the Dean of the Sacred College Carlo Confalonieri a eulogy was read by [9]

The Tomb of John Paul I is in Vatican Grottoes in St Peter's Bascilica, Vatican City, Rome, Italy[10]

This profile is being updated by the Popes Project.

Wikipedia is not a reliable source. Please check for quality sources for this profile. 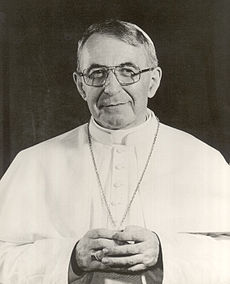