Erich Friedrich Wilhelm Ludendorff (9 April 1865 – 20 December 1937) was a German general, the victor of the Battle of Liège and the Battle of Tannenberg. From August 1916, his appointment as Quartermaster general (Erster Generalquartiermeister) made him the leader (along with Paul von Hindenburg) of the German war efforts during World War I until his resignation in October 1918, just before the end of hostilities.

Ludendorff was born on 9 April 1865 in Kruszewnia near Posen, Province of Posen, Kingdom of Prussia (now Poznań County, Poland), the third of six children of August Wilhelm Ludendorff (1833–1905). His father was descended from Pomeranian merchants who had achieved the status of Junker[citation needed], the Prussian epiphet of lower nobility, and he held a commission in the reserve cavalry. Erich's mother, Klara Jeanette Henriette von Tempelhoff (1840-1914), was the daughter of the noble but impoverished Friedrich August Napoleon von Tempelhoff (1804-1868) and his wife Jeannette Wilhelmine von Dziembowska (1816–1854), who came from a Germanized Polish landed family on the side of her father Stephan von Dziembowski (1779-1859). Through Dziembowski's wife Johanna Wilhelmine von Unruh (1793-1862), Erich was a remote descendant of the Counts of Dönhoff, the Dukes of Legnica and Brzeg and the Marquesses and Electors of Brandenburg.

At age 45 he married the daughter of a wealthy factory owner, Margarethe née Schmidt (1875–1936). She divorced to marry him, bringing three stepsons and a stepdaughter. Ludendorff divorced and married his second wife Mathilde von Kemnitz (1877–1966) in 1926. Erich Ludendorff died of liver cancer in the private clinic Josephinum in Munich, on 20 December 1937 at the age of 72. He was given — against his explicit wishes — a state funeral organized and attended by Hitler, who declined to speak at his eulogy. He was buried in the Neuer Friedhof in Tutzing.

Is Erich your ancestor? Please don't go away!

ask our community of genealogists a question.
Sponsored Search by Ancestry.com
DNA
No known carriers of Erich's ancestors' DNA have taken a DNA test. 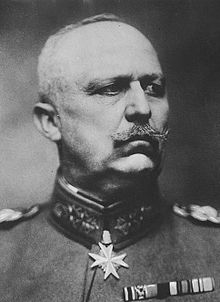