"Molly Pitcher" was a hero of the American Revolution, generally thought to have been Mary (Ludwig) Hayes.[1]

Mary Ludwig was born October 13th, 1744, or October 13th, 1754 (biographies differ regarding the year), possibly in Philadelphia, Pennsylvania, or possibly in Trenton, New Jersey.[2] She was the daughter of Maria Margaretha and John George Ludwig, a butcher who emigrated from Germany with the Palatines. [3] She had an older brother, Johann Martin Ludwig.

In 1769, Mary was employed as a servant in the Carlisle home of Gen. William Irvine. [3]

Mary married John Casper Hayes on the 24th of July, 1769 at Michael's and Zion Church, in Philadelphia, Pennsylvania. They settled in the town of Carlisle, Cumberland County, Pennsylvania.[4]

Following the early death of John, Mary married William Hays, a barber, who was presumably a brother to her first husband. During the American Revolutionary War, William was a gunner in Proctor's 1st Pennsylvania artillery in December 1775. [3] During the winter of 1777, Mary joined her husband at the Continental Army's winter camp at Valley Forge, Pennsylvania. She was one of a group of women, led by Martha Washington, known as "camp followers", who would wash clothes and blankets and care for sick and dying soldiers.

Continental Army records show that William was an artilleryman at the Battle of Monmouth in 1778. At that time, Mary carried water to the men in action and was on the field when her husband was shot down in a charge made by the British cavalry. There being no one to take charge of his piece, "Molly Pitcher", as Mary was familiarly called by the gunners, dropped her pitcher, stepped forward and grasped the ramrod, declaring that she would take her husband's place and avenge his injury, as he was carried off the battlefield. [3] For the rest of the day, in the heat of battle, Mary continued to "swab and load" the cannon in her husband's place.

Following the battle, General George Washington asked about the woman whom he had seen loading a cannon on the battlefield. For her excellent service and in commemoration of her courage, the following day he issued Mary a warrant as a non-commissioned officer. Afterward, she was known as "Sergeant Molly," a nickname that she used for the rest of her life. She served nearly eight years in the army, and later was placed on the list of half-pay officers. [3]

Following the end of the war, Mary and her husband returned to Carlisle, Cumberland County, Pennsylvania. She lived at the Carlisle barracks for many years, where she washed and cooked for the soldiers and was employed as a children's nurse. [3] During this time, Mary gave birth to a son named Johannes (or John) Hays. In late 1786, her husband William died and some pension benefits were granted to her and her son John.

In 1793, Mary married a third time, to Sgt. George John McCauley. George was another Revolutionary War veteran and possibly a friend of William Hays. McCauley was a stone cutter for the local Carlisle prison. The marriage was reportedly not a happy one. He lived on her earnings and treated her poorly. [3]

Mary died on 22 January 1832 in Carlisle, Pennsylvania, at the approximate age of 78 years. She was buried with military honors [3] at the Old Graveyard in Carlisle, under the name "Molly McCauley". [5] A monument representing her in the act of loading a cannon was erected on the field of Monmouth, and in 1876 a second was erected on her grave at Carlisle. She is also represented in George W. P. Custis' painting, "The Field of Monmouth". [3] 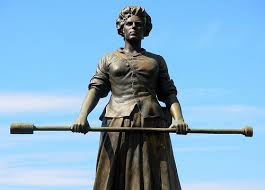 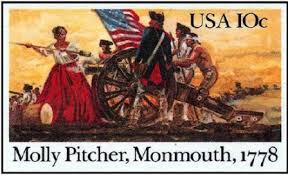 The Heroine of Monmouth 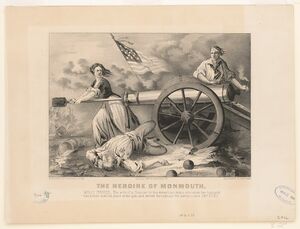 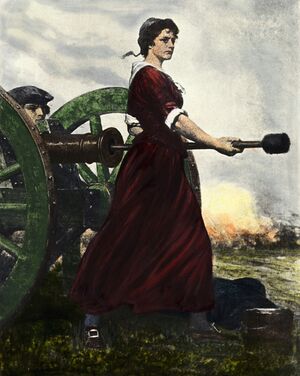 A woman whose husband belonged to the artillery and who was then attached to a piece in the engagement, attended with her husband at the piece the whole time. While in the act of reaching a cartridge and having her feet as far before the other as she could step, a cannon shot from the enemy [passed directly between her legs without doing any other damage than carrying away al the lower part of her petticoat. Looking at it with apparent unconcern, she observed that it was lucky it did not pass a little higher, for in that case it might have carried away something else, and continued her occupation.' ( _Private Yankee Doodle_, Joseph Plumb Martin, Eastern Acorn Press, 1962.

Abby (Brown) Glann
There was a list of children that I have saved in a note, but they didn't have a source attached, which husband was father, and dates. If someone wants to work on adding profiles for them, they'd help the profile completeness. I will try to work on adding them later today, otherwise, but research in this era is not my strongest suit.
posted Jul 01, 2020 by Abby (Brown) Glann

Abby (Brown) Glann
Looking at the list compared with the sources available, the listed son seems to be the only one that anyone agrees on. I am not adding any further, but if someone has a reliable source for any others, please go ahead :-)
posted Jul 02, 2020 by Abby (Brown) Glann

Ellen Smith
Two accounts of her that I read (the ones by Emily Teipe and Kerri Alexander) indicated that was age 22 and pregnant around the time of the Battle of Monmouth. If true, that suggests that she was born closer to 1754 than 1744, that she did not marry John Hays before marrying William Hays, and that she had at least one child a few years before 1783.
posted Jul 02, 2020 by Ellen Smith

Doug Laidlaw
Is it my browser? The link to Martha Washington brings up Ann Dandridge.
posted Jul 01, 2020 by Doug Laidlaw

Dorothy Barry
Always enjoyed reading stories about Mary (Ludwig) McCauley or "Molly Pitcher". First learned of her when I was in basic training at Fort McClellan. Alabama She was one of the pioneers in helping integrate females in the US. Army.

From the beginning with her and others serving in the Revelation War (some taking the place of their husbands), to Dr. Mary Walker who served in the Civil War, the only women to ever get the Medal of Honor; to Mary O'Rourke, who served in the Signal Corps as a Telephone Operator during World War l ... to those ladies joining during World War II starting with the Women's Army Auxiliary Corps, (WAAC 1942) to the Women's Army Corps, (WAC 1943-1978) to now part of the regular US Army.

There was a lot of research and work done on this particular profile by several WikiTree members since its creation in 2014. Love the photos as well. Thank you for sharing this as this week's profile of the Week! Job well done!!

SJ Baty
NCO is a rank description, not a rank. Her rank was Sergeant; the sticker should be changed to Sergeant Molly (Ludwig) McCauley. As a for example, if General Washington had given her a rank as an officer, say a lieutenant, she wouldn't be "Officer Molly..." She would be "Lieutenant Molly..."
posted Jun 30, 2020 by SJ Baty

If no one has done so, please feel free to update that template! I am on my phone and don't trust bio changes from it-bad things have happened, ha!

Nancy (Lowe) Sitzlar
Molly was an awesome woman. I am so happy you chose Molly's life story to highlight. It is so inspiring every girl and woman should read about Molly's life there is no doubt they would be inspired by her heroism and patriotism.
posted Jun 29, 2020 by Nancy (Lowe) Sitzlar
Jim Lawrence
Thank you for highlighting Molly, a brave and noble patriot. Kudos to Gen. Washington for recognizing her heroism.

We have a very old engraving (can't decifer artist) of "Moll" hanging in our home with other Revolutionary War depictions. My ancestors were early settlers in Monmouth. Jim Lawrence

Mary is 30 degrees from Ludwig Kraayenbrink, 20 degrees from Henry VIII of England and 25 degrees from Ferdinand von Zeppelin on our single family tree. Login to find your connection.