Red Cloud was a war leader and a chief of the Oglala Lakota.He led a campaign known as Red Cloud's War from 1866–1868 ,for control of the Powder River Country in northeastern Wyoming and southern Montana.[1] 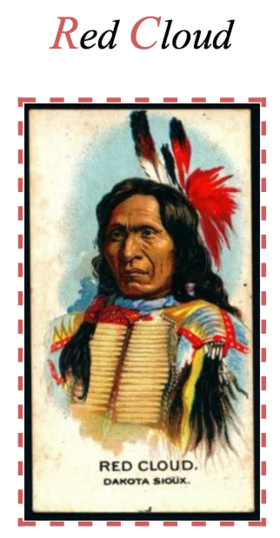 Maȟpíya Lúta[2] was born in present day North Platte, Nebraska near the forks of the Platte River, into the Brulé Lakota tribe.

Maȟpíya Lúta, was called Red Cloud, which in Lakota means Scarlet Cloud, when he was born there were crimson clouds in the sky above.[3]

His father was Lone Man, who was a Brulé Lakota chief and his mother was Walks As She Thinks.[4]

Just before his parents died (in 1825)[citation needed], his father gave him a wild colt, and said to him:

My son, when you are able to sit quietly upon the back of this colt without saddle or bridle, I shall be glad, for the boy who can win a wild creature and learn to use it will as a man be able to win and rule men.

Red Cloud began quietly to practice throwing the lariat. In a short while he was able to lasso the colt.[citation needed]

After his parents' deaths, Red Cloud was raised by his uncle, Old Chief Smoke (head chief of the Oglala Sioux).[5][6] [7]

While he was young, Red Cloud wanted to excel himself as a warrior. He showed great bravery in battles with the Oglalas' and other tribes, including the Pawnees.[citation needed]

Red Cloud and Pretty Owl had one son and 5 daughters.[10] It is written that Red Cloud had only one wife,but it was reported by Mrs. James Cook in J. Olson, Red Cloud and the Sioux Problem, that in his younger days that Red Cloud had 5 wives. Although it seems that Pretty Owl, would not share her husband with other women.She said to an old friend, Charles P. Jordan.When he, Red Cloud was a young man, I was very jealous of him and used to watch him very closely for fear some other woman would win him from me.

Red Cloud resisted the white expansion into his people's land. He would not sign several treaties with the U.S. government. In 1866, he left negotiations that were taking place at Fort Laramie in Wyoming. On December 21, 1866, a party of 80 soldiers that was led by Captain William Judd Fetterman, were sent to eliminate their Native American problem. But more than 1,000 Indian warriors were waiting. This became known as the Fetterman massacre.[11][12] By the spring of 1868, General Ulysses S. Grant decided to abandon the forts in the northern part of the Bozeman trail. Even though Red Cloud signed a treaty later that year, [13] he resisted government, from moving him and his people from their lands.[14] "Red Cloud's War" was the name the US Army gave to a number of conflicts, against the United States Army between 1866 and 1868.

At the end of Red Cloud's war, he signed the Second Treaty of Fort Laramie.[15][16] The U.S. promised it would abandon the Bozeman Trail. The U.S. also gave the Lakota Sioux possession of what is now the western half of South Dakota, along with large parts of Wyoming and Montana. Red Cloud agreed to stop fighting, he moved onto a reservation in Nebraska, known as the Red Cloud Agency. After the war, Red Cloud served his people as a diplomat.[17]

In 1870, Red Cloud visited Washington, with other Native American leaders, they met President Grant.[18] In 1875, Red Cloud met with Grant again, President Grant offered $25,000, to the Sioux if they would give up their rights to hunt along the Platte River in Dakota Territory. The leaders Red Cloud, Spotted Tail, and Little Wound refused.

Red Cloud's son still wanted to fight for their land and way of life. After Sitting Bull's total defeat of General George Armstrong Custer's, Seventh Cavalry in June 1876, whites began an aggressive campaign against Native Americans in the West. But Red Cloud still would not go to war.

In 1878, Red Cloud moved to Pine Ridge Agency. The Indian agent, at the Pine Ridge Agency, treated the Indians dreadfully.[citation needed] Red Cloud fought for their rights, and he succeeded in having the agent dismissed. Red Cloud continued his work, to keep the Indian lands and to maintain the power, of traditional Native American leaders. In their later years, Red Cloud and Pretty Owl converted to Christianity, he changed his first name to John, and she was called Mary.[19] 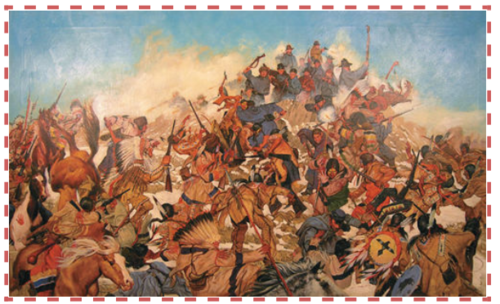 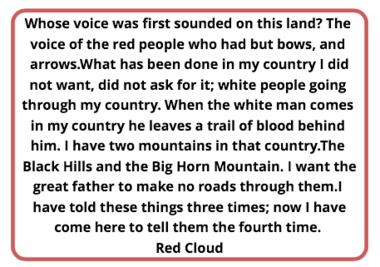 Needs Incorporation into Narrative Above

Sponsored Search by Ancestry.com
DNA Connections
It may be possible to confirm family relationships with Mahpiya by comparing test results with other carriers of his Y-chromosome or his mother's mitochondrial DNA. However, there are no known yDNA or mtDNA test-takers in his direct paternal or maternal line. It is likely that these autosomal DNA test-takers will share DNA with Mahpiya: 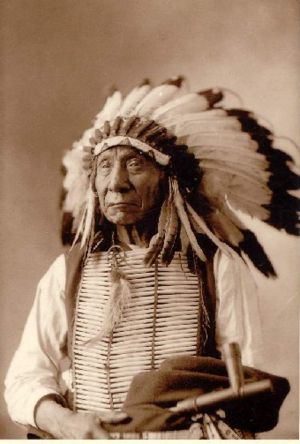 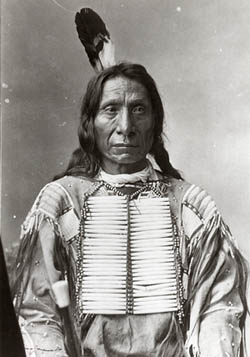 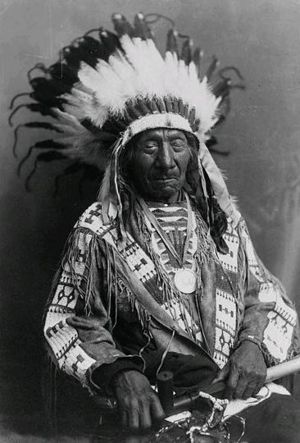 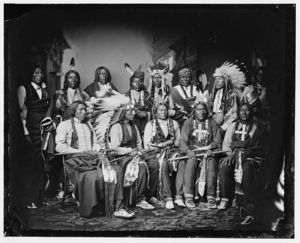 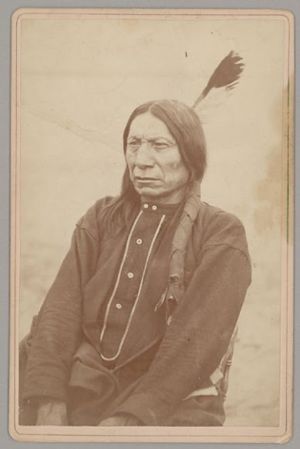 Jillaine Smith
Oh dear me. THANK YOU for catching that. I've corrected it.
posted Jan 03, 2020 by Jillaine Smith

David Thomson III
I agree with Kathie Forbes regarding the LNAB for this person. I was working up from local descendants before I created the Red Cloud-11 profile. The local descendants took the name of Redcloud as their surname for several generations. I didn't get a match on Wikitree until entering Chief Red Cloud's father, and stopped developing the family genealogy. I was waiting for a representative of the family to appear who could give the profile authenticity.
posted Jan 03, 2020 by David Thomson III

Jillaine Smith
Red Cloud-11 and Luta-1 appear to represent the same person because: These

Represent the same individual. Neither last name at birth is accurate. Or if you have a source for either please provide it.

David Thomson III
Jillaine, "Bois Brule" is a term used to indicate a person of mixed Indian and French Canadian blood. Chief Redcloud is said to have been a part of the Brule Sioux Indians. There was an island on the Mississippi in Randolph County, Illinois that at one time was known as Crain's Island. The island is now completely washed away, but at one time it had a population of about 1000 people. During the censuses for Crain's Island, the census district was always called "Bois Brule, Missouri," and even though the land belonged to Illinois, the population count went to Missouri. I have yet to find out why this was. But in any case, Bois Brule was a settlement on the Missouri side of the Mississippi, that was part of the French settlements of Louisiana Territory and Old Spain Territory. During the late 1700 and early 1800s, there was heavy river traffic to the tune of about 100 boats passing up and down that area every day. The French, Indian, British, and Virginian traders intermingled extensively during that time.

I suspect that Joseph Desmet Lewis was a regular in this area, just as much as Chief Redcloud, the Clark family, and the Lewis family. Even my own ancestor, John Mansker, lived on those islands and during those times, and undoubtedly traded and mingled among them. The traders and settlers of Old Kaskaskia were French, and got along well with the Sioux and other tribes of Indians, and intermarried with them. joseph Desmet Lewis would have been among the first to have Virginian blood, as opposed to French blood.

So it is likely that the Brule Sioux represents those families who intermarried, but who retained the Native American lifestyle as opposed to the European lifestyle.

Jillaine Smith
I checked with the profile manager. They're fine with redoing this profile. I'll start on removing the no longer approved formatting.
posted Oct 02, 2019 by Jillaine Smith

Terry Wright
Some of the quotes on this page came from

Sarah Mason
Okay. I'll start a section, we can move it to a page later if we want. I just noticed there is already a free space page (link at bottom of page hiding under sources) but its contents are copied and pasted. It is currently orphaned.
posted Oct 02, 2019 by Sarah Mason

Jillaine Smith
Let's proceed with caution here; the WikiTree volunteer who did the bulk of the work on this profile invested significant time into it. I want to find a solution that respects that investment, while at the same time improving the sourcing and genealogical information. For example, each of the quotes (which were uploaded as graphics) need to be cited (as you said, Sarah). Where do these quotes come from? There are also a number of other statements throughout the narrative that could benefit from having sources cited.

Sarah, you could add a section, just above Sources, called Research Notes, and place a discussion of discrepancies there.

This profile also uses a formatting style that is no longer recommended. I'll reach out to the profile manager to made these edits.

Kathie (Parks) Forbes
Id suggest copying the whole thing to a free space page and starting over with only what is provable. Many of these Native American bios are just copied from unsourced web pages and/or Wikipedia.
posted Oct 02, 2019 by Kathie (Parks) Forbes

Sarah Mason
We need much better sources for some of this profile information, especially citations for the quotes that are being directly attributed to Red Cloud. This profile feels like a summary of popular websites without a lot of actual genealogical information available. There seems to be a lot of legends and misinformation associated with Mahpiya Luta. Can we start a section to collect sourced or contradictory information? Should a free-space page be used? How would the NA project prefer to proceed?
posted Oct 02, 2019 by Sarah Mason

Categories: Activists and Reformers | Battle of the Little Bighorn | Lakota