Martin Luther is best known for shaking up the religious world with his 95 Theses, which started the Reformation.[1][2][3][4]

Martin Luther was born November 10, 1483, in Eisleben, Mansfeld, Sachsen-Anhalt, Germany, the son of Hans Luder and his wife Margarete Lindemann (Ziegler).[1][2][4] His town was in the Holy Roman Empire at the time of his birth.

Martin's father was a successful businessman, working in local copper mines, and a very stern, hard tempered person.[1][2][4] Home life was difficult, with beatings a regular facet of his life as punishment for the smallest of offences.[4] Moving around age 10, Martin attended a school run by the Brethren of the Common Life, which focused on personal piety.[1] His interest in a monastic life was stirred here.[1]

Martin had prepared to be a lawyer, attending university at a young age and attaining a bachelors and masters degree in the shortest amount of time allowed.[1][2][4] At the age of 21, he rebelled against his father's dreams of him being a lawyer, though, and instead became an Augustinian monk.[1][4] His life change was inspired by a storm he was caught in, and in thinking he might not make it, vowed to enter into a monastic life if he survived.[1][2] He also said he the move was influence by his violent childhood.[4]

Martin continued his education while living his monastic life, eventually attaining his doctorate in biblical studies.[1][2] Ideas he was forming during this time would leave a lasting mark on Western history.[1][2] It did not take him long to decide that the Catholic Church was corrupted and needed to change to better accommodate their parishioners.[1]

The printing press and better translations of documents were making more and more information available to more people, including Martin.[1]

On All's Saint's Day Eve, October 31, 1517, Luther nailed his list of 95 Theses, written in Latin, on the wooden doors of Wittenberg Cathedral, which served as a community bulletin board.[1][2][4] His intention was to propose debate of his ideas for internal reform of the Roman Catholic Church.[1] His ideas were quickly taken to a print shop, translated into German, and distributed widely.[1][2] His ideas included ending the practice of taking payment or "indulgences" to absolve sins, that the Bible was the only source of authority in the Church, and that faith only would admit people to heaven.[1][2][4] The ideas weren't necessarily new, but Luther had timing on his side.[1]

In 1518, Martin was summoned to Augsburg where he would debate with Cardinal Thomas Cajetan, but no agreements could be made.[1][4] On November 9th of that year, the Pope condemned Martin's writings, calling them scandalous.[1][4]

On 15 June 1520, the Pope Leo X warned Luther with the papal bull (edict) Exsurge Domine that he risked excommunication unless he recanted 41 sentences drawn from his writings.[1][4] On January 3, 1521, Luther was excommunicated from the church for his theses, after his refusal to recant his ideas.[1][4]

He was given yet another chance 17 April 1521 at the Diet of Worms in the audience of Charles V, but still refused.[1][2][4] It was here that Luther famously made his declaration of refusal in his statement "Here I Stand".[1][2]

Charles V issued an edict against Martin and that all Luther's writings should be burned.[1][2] Luther was hidden by his friend Prince Frederick for a few years in a tower at the Castle of Wartburg.[1][2] He only ventured out disguised as a nobleman named George.

Luther used his captivity to translate the Holy Bible into German, using original language texts in Hebrew and Greek rather than Saint Jerome's Latin Vulgate version from the early Middle Ages.[1][2][3] He also relied heavily on Erasmas' Greek Translation of the Bible, which was published in Luther's lifetime.[3] In doing so, he helped to codify the German language. It took him nearly 10 years to complete the New Testament.[1] During this time, his influence grew beyond just his contributions, and political changes had emerged, leading to the Peasants' War.[1][2]

Later, Luther returned to Whittenburg and for the remainder of his life, managed to avoid arrest while preaching a reformed view of Christianity at the Castle Church.[1][2] His followers later became known as the Evangelische or Lutheran Church.[citation needed] He preached reforms which focused on returning Christianity to faith in Jesus Christ, and salvation by faith alone.[2] His ideas were written and signed in a document entitled the Augsburg Confessions. This document was supported by the Princes of the Holy Roman Empire, who used the Augsburg Confessions in 1530 in their stand against Charles V, Holy Roman Emperor.

Other reformers of Luther's time went much further in protesting the Roman church, closing monasteries and convents, and destroying symbols of organized religion. Luther mocked many of them, and used offensive language in doing so.[2] Luther met his future wife Katherina Von Bora when he rescued a group of evicted nuns who came to him for help.[1] Martin Luther and Katharina VonBora married in 1525 and had at least six children, including a son Paul Luther, born 1533, who married Anna V. Warbeck.[1][2] Martin and Katharina Luther raised their family in an old monastery given to Luther by the ruler of Saxony. Here they entertained and boarded many students and other guests and Luther would debate them all at the dinner table. Some of these discussions have been published in a work entitled Table Talks.

Luther was constantly writing and publishing, and among his works are included the Small and Large Catechisms, written to help parents teach their children Biblical truths. Luther also studied and wrote hymns based on his theology which were used for the church services he held. In his later years, his views became further and further removed from the Catholic Church's, and included support for polygamy based on Old Testament practice and sentiments against Judaism.[1][2][5]

Martin Luther died in February 1546, but the Reformation he ignited has influenced Western history and culture for the 500 years since.[1][2] His writings are still actively studied and preached today in numerous branches of the Christian church.[2]

Today Martin Luther is considered one of the most prominent figures responsible for the reformation of Christianity, and one of them most important figures of the Second Millennium. 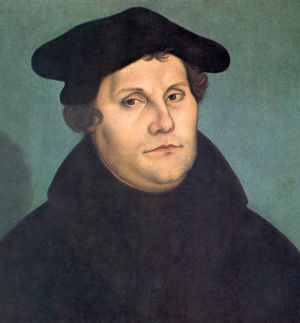 Ben Molesworth
Really great profile. Should be the profile of the week for All Saint's Day, or Reformation Day.
posted Oct 29, 2019 by Ben Molesworth

Peter Roberts
YSearch SQ66M is a 21/37 mismatch with YSearch YTE6E who is believed to also belong to this same direct paternal line. See https://eupedia.com/genetics/famous_y-dna_by_haplogroup.shtml#I2a1 and The Luther Surname DNA Project results at https://www.familytreedna.com/public/Luther?iframe=yresults
posted Oct 31, 2017 by Peter Roberts

Leigh (Hoolihan) Murrin
Should this last name be changed to LUDER? I heard an interview today with Professor Lyndal Roper who has just written a bio about Martin Luther, she expressly said he changed his LNAB to LUTHER in adulthood. Book is here (https://www.amazon.co.uk/Martin-Luther-Renegade-Lyndal-Roper/dp/1847920047)
posted Oct 31, 2017 by Leigh (Hoolihan) Murrin

Abby (Brown) Glann
Just a heads up to any trusted list members, I am going to move this biography into a more narrative format and add inline citations. If any of you want to dig in, please go ahead. Otherwise, I want to make sure Dr. Luther is ready for his Reformation birthday next week. Thanks!
posted Oct 26, 2017 by Abby (Brown) Glann
[Living Sälgö]
.
posted Oct 05, 2017 by [Living Sälgö]