Sigismund (February 14, 1368 ? December 9, 1437) was Holy Roman Emperor for 4 years from 1433 until 1437, and the last Emperor of the House of Luxemburg. He was also one of the longest ruling Kings of Hungary and Croatia, reigningfor 50 years from 1387 to 1437. Sigismund was one of driving forces behind the Council of Constance that ended the Papal Schism, but which in the end also led to the Hussite Wars that dominated the later period of Sigismund's life.

Born in Prague, Sigismund was the son of the Emperor Charles IV and of his fourth wife Elizabeth of Pomerania, the granddaughter of King Casimir III of Poland.

Sigismund married Queen Mary of Hungary. She and her only child both died shortly after the birth in the hills of Buda on May 17, 1395.

By his second wife, Barbara of Celje, he left an only daughter, Elisabeth, who was married to Albert V, duke of Austria (later German king as Albert II) whom Sigismund named as his successor.

He died in 19 December 1437 at Znaim (in Czech Znojmo, Moravia (now Czech Republic, and was buried at Nagyvárad, Hungary (in German Grosswardein, in Romanian Oradea, now Romania).

As he left no sons his line of the house of Luxembourg became extinct on his death.

Sponsored Search by Ancestry.com
DNA
No known carriers of Sigismund's DNA have taken a DNA test. 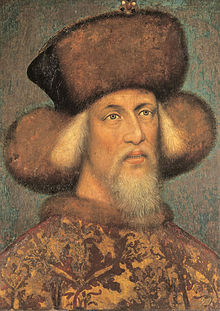 Leave a message for others who see this profile.
There are no comments yet.
Login to post a comment.
[Living Sälgö]
.
posted Oct 02, 2016 by [Living Sälgö]