Rosa Luxemburg was born on 5 March 1871 in Zamość in Russia-controlled Poland, the fifth child of Line Löwenstein and Eliasz Luxemburg.[1]

She joined the Polish left-wing Proletariat Party in 1886 and began political activities including organising a general strike.[1]

She married Gustav Lubeck in April 1897.[1] Gustav was the son of an old friend, their marriage was purely for Rosa to gain German citizenship. The couple never lived together and divorced formally after five years.[1] Rosa moved to Berlin in Germany in 1898.[1]

In Germany, Rosa continued her political activism, founding the Die Internationale group (which became the Spartacus League) and writing dozens of texts.[1] Those texts included:[2]

Rosa opposed the First World War, which she saw as neither serving the needs of national defence in Germany, nor any of the economic or political interests of the masses, and rather soley serving imperialist rivalries between the capitalist classes.[3] She was condemned to a year of prison for criticising Germany's military regime.[4]

On 15 January 1919 in Berlin,[5] Rosa was assassinated, along with her fellow Communist Party of Germany leader Karl Liebknecht.[6][7]

According to the Brisbane newspaper Daily Standard, an account of her death in the "Workers' Dreadnight" stated that the assassinated pair were under arrest and being kept at the Eden Hotel. They were being transferred to the Moabit lock-up, accompanied by First-Lieutenant Kurt Vogel, Otto Wilhelm Runge and several other German officers. The officers turned on Rosa and Karl, rushing Rosa with the butt-end of their rifles, and striking her violently on her head. Her body was by then bathed in blood, and the officers dumped it in the pond at the Tiergarten, Berlin's most popular inner city park.[8]

Is Róża your ancestor? Please don't go away!

ask our community of genealogists a question.
Sponsored Search by Ancestry.com
DNA
No known carriers of Róża's ancestors' DNA have taken a DNA test. 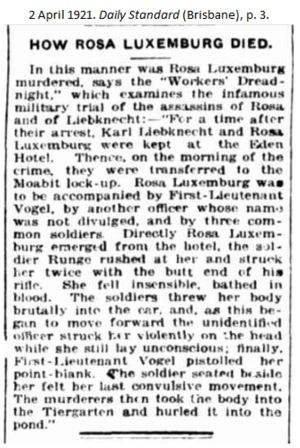 Helmut Jungschaffer
The LNAB for Rosa and her father should be Luksenburg, only later written as Luxenburg and then changed through a bureaucratic error to Luxemburg. Birth place was in Królestwo Polskie, Imperium Rosyjskie, place of death in Königreich Preußen, Deutsches Reich.
posted Jul 12, 2020 by Helmut Jungschaffer
Maciej Mermon
Rosa's last name at birth was actually Luxenburg.
posted Feb 25, 2019 by Maciej Mermon