Wikipedia provides a very comprehensive coverage of the life of Bhagavan Sri Ramana Maharshi, who received this name from one of his devotees - [Kavyakantha Sri Ganapati Sastri] - in 1907[1]; with Bhagavan meaning God, Sri an honorific title, Ramana a short form of his first birth name, and Maharsi meaning 'great seer' in Sanskrit.

Venkataraman was the second of four children in an orthodox Hindu Brahmin family. His father was Sundaram Lyer (1848–1890) and his mother Alagammal (1864-1922). He was brought up in a home where regular worship took place to Hindu Gods, and he followed traditional practices. Osborne, Arthur (1954) has Ayyar as the surname of the father, and also points out the fairly close correspondence between the birth and death dates of his son and that of Jesus.

When he was about 11 he was sent by his father to live with his paternal Uncle Subbaiya so that he could be educated in English, and was to remain with him after his father died in 1892, in Madurai, 45kms north of the village of Tirichuli, where he was born. But before that he had an experience interpreted as resulting from Khama from a previous life.

He was an abnormally heavy sleeper, perhaps a deep meditative state (?), and even his school 'friends' could carry him around from his bed, bumping into everything, and beating him, without awakening him (see Sadhu Arunachala (Major A. W. Chadwick), 2005, p7). He was to use the word 'meditation' for thought-free contemplation, "turning the mind inwards to the awareness beyond thought" (Osborne, 1954, p.151).

Although he attended all levels of schooling, ending with an American Mission High School where he became acquainted with Christianity, and had an extremely attentive memory, he was of athletic rather than scholarly aptitude. However, on July 1896, aged 16, he had a "death-experience" that was to change the whole course of his life: "he became consciously aware for the first time that his real nature was imperishable and that it was unrelated to the body, the mind or the personality"[2]: as a consequence he was to say that he had no lineage - no relationships, no name to sign. In one short hour he had become a full-realised soul. The experience is also fully described by Sadhu Arunachala (2005, pp.2-5). He became absent-minded at school, lost all interest in school studies, friends, and relations. The initial fear of death turned him to a process of self-enquiry, which was to become "the cornerstone of his practical philosphy"[3], leading to Self-realisation.

The detailed analysis of the various sources describing the "death-experience"[4] show a similar realisation to that had by Eckhart Tolle, when he awoke with the thought "I cannot live with myself" and also concluded that he was not the body.

Ramana's goal was to become a Sannyasi, as had a paternal uncle of his father and his father's brother, renouncing all material desires and prejudices, dedicating his life to peaceful, love-inspired, spiritual pursuits[5], aware "that his real nature was formless, immanent consciousness" (see ref.2), but his family was against it. So, on 1 September 1896 he went by train to the Tiruvannamalai area, where he was to stay for the rest of his life: his elder brother having unwittingly told him to take some money from a box to pay his college fees Venkataraman having told him that he was going to school. He left a note for his brother, which shows that he had made the transition from duality to Oneness (see Osborne, 1954, p.19). Tiruvannamalai, some 300kms to the north of Madurai, lies at the foot of the sacred Arunachala Hill, which he had been astonished to learn, sometime before, in November 1895, was an earthly manifestation. A second premonition relating to a manifestation is also referred to by Osborne; and the story of his train and foot journey as told by Osborne (1954, pp.20-24) is most enlightening.

For the next 2 years he stayed in a variety of temple locations in the Tiruvannamalai area but would not have survived without the attention of caring individuals. He also declined requests from family members to return to Madurai. Soon after his arrival he completed the acts of renunciation, having attained Self-realisation, including complete detachment from mundane affairs, then becoming absorbed in the Real, in the Bliss of Being, totally ignoring the outer world. This 2nd phase of his outer manifestation merged into the 3rd that was expressed by an outer radiance that shone on all who approached him and continued for the rest of his life (Osborne, p.26). Towards the end of his time in the Tiruvannamalai area he outwardly seemed to return to a more normal life.

His mother had been searching for him for some time but had no idea where he had gone. Eventually she heard that he was in the Tiruvannamalai area and went there with his elder brother. They found him in a small temple at Pavalakunru, in the foothills of Arunachala, where he had moved to towards the end of 1898, but was not interested in discussing the matter with them. Osborne (1954, Ch.8, The Mother, p.73) has it that it was in 1900 that she and Nagaswami visited Ramana unsuccessfully, and that Nagaswami died soon afterwards.

In February 1899 he began a 17 years period living in caves on the east side of the sacred (817m high) Arunachala Hill. In 1902 a Philosophy graduate by name of Sri M. Sivaprakasam Pillai on a business trip for the Revenue Department to Tiruvannamalai, visited the young Swami in the Virupaksha Cave on Arunachala Hill and put a series of 14 questions to him. The questions and the Swami's answers were the beginning of his teachings on 'Self-enquiry' (see Ramana Maharshi, 1982, p.2). The teaching and instruction in the 1902 book, "Who am I" were all that was needed. It was in the same year that his 17yrs old younger brother Nagasundaram visited him.

Many visitors came to see him, attracted by his spiritual radiance, and became his devotees, one of whom, as mentioned in the first paragraph, gave him the name he would become known by - Bhagavan Sri Ramana Maharshi in 1907.

His trance states came to an end in 1912, when he had his "final and complete experience of death" - "a fit in which both circulation and respiration stopped" - it was the "certainty of endurance through death which had constituted Sri Bhagavan’s spiritual awakening" (Osborne, 1954, pp.60-62). It was followed to a full return to a normal mode of life.

Following very much changed circumstances for his family, he was joined by his mother and his younger brother Nagasundaram in 1916, who moved with him to a larger cave known as Skandashram Cave. They became Sannyasini and Sannyasi respectively under his guidance. He also composed some poems whilst there - The Five Hymns to Arunachala, his magnum opus in devotional lyric poetry, and only moved out of the Skandashram Cave after his mother had passed over from there on 19 May 1922. Her tomb at the base of the Hill, on the south side, provided the focus for what was to become Sri Ramanasramam (see Osborne 1954, Ch.12), his ashram, which he finally moved to in December of that same year and began with a single hut.

As it grew, his younger brother Nagasundaram, who had become Niranjananda Swami was put in charge of the administration as 'Ruler of the Ashram' (Osborne, 1954, p.133).

Sri Ramana Maharshi told a visitor “Till now you seriously considered yourself to be the body and to have a form. That is the primal ignorance which is the root cause of all trouble" (Osborne, 1954, pp.136-7).

He remained at Sri Ramanasramam until he died in 1950, involving himself in the communal activities, as well as seeing visitors and devotees, whilst living and sleeping in the community hall, in the "Old Hall" from 1927 to 1950. He was noted for his silent interviews, although he would transmit his teachings orally to those who did not understand his silence.

The Wikipedia biography notes how it was the publication of books about Sri Ramana Maharshi by B. V. Narasimha in 1931 and Paul Brunton in 1934 that spread the word in and beyond his homeland, India.

Chapter 12, titled "Life of Sri Bhagavan", of Osborne's book, gives a beautifully moving description of the time during and after 1947, when due to age and failing health, he was no longer available privately and at all hours, but how all were still affected by the radiance of his smile, and so much more.

From November 1948 when a tiny cancerous lump was discovered on one of his arms, many attempts to stop it spreading, and after refusing to have the arm amputated, his health deteriorated until he made his transition on 14 April 1950. "To devotees who begged him to cure himself for the sake of his followers, Ramana is said to have replied, "Why are you so attached to this body? Let it go," and "Where can I go? I am here."" (see Osborne, Arthur, 1954; Ch.12 'Mahasamadhi' who understandingly and in great detail describes his last few years and the moments before the body stopped breathing). Mahasamadhi means leaving the body.

After his transition, Niranjananda Swami, who had been his younger brother, became permanent President of the Committee formed to manage the Ashram.

"Ramana Maharshi was, and is, regarded by many as an outstanding enlightened being" (see the Wikipedia Biography). The Teachings are described very clearly in Godman, David (1985) and his life[6]. Without a trace of ego remaining, his promise was, not that he would return, but rather “I am not going away. Where could I go? I am here.”

Is Ramana your ancestor? Please don't go away!

ask our community of genealogists a question.
Sponsored Search by Ancestry.com
DNA
No known carriers of Ramana's ancestors' DNA have taken a DNA test. 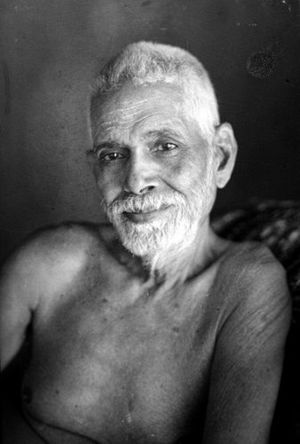