Nathaniel Lyon was born July 14, 1818 at Ashford, Connecticut, the son of Amasa and Kezia (Knowlton) Lyon. He never married.

He graduated from West Point in 1841, 11th in a class of of 52 and was commissioned as a 2nd Lieutenant. He was assigned to the 2nd U.S. Infantry and was involved in the Mexican War where he was promoted to 1st Lieutenant at the Battle for Mexico City. He was then moved to the frontier where he participated in the Indian battle of Promo Lake, California and the Bloody Island Massacre. He was reassigned to Fort Riley, Kansas where he apparently became antislavery and began supporting the Republican Party.

General Lyon was killed in battle at Wilson's Creek at about 9:30 AM on Bloody Hill, he was 43 years of age. Lyon had been previously wounded twice and his life was taken on that fateful day, while positioning his troops.[2]He was the first Union General to be killed in the Civil War.[1]Victors in the Battle at Wilson's Creek were the Confederates, with Major Samuel Sturges withdrawing at 11:00 AM on the same day as General Lyon was killed. In the confusion, the General's body was left behind and was found by the Confederates and brought to the home of a local farming family by the name of John Ray and his wife Roxanna Steele Ray. The Ray's home was used as a Confederate hospital during the battle. There the body of General Nathaniel Lyon was wrapped in a coverlet and laid in the master bed until temporarily buried by Mrs. Phelps, the governor's wife, at Springfield until it could be recovered by his family and returned to Connecticut.

The coverlet that wrapped the body of General Lyon can be seen at the Wilson's Creek Museum near Springfield, Missouri.

The funeral for General Nathaniel Lyon was held at The Congregational Church in Eastford, Connecticut on September 5, 1861. 15,000 people assembled to show their respect.[2]

The United States Congress passed a resolution of thanks for the "eminent and patriotic service" of General Lyon on December 24, 1861.[2]Lyon County in Southwestern Minnesota is named in his honor.[3]

ask our community of genealogists a question.
Sponsored Search by Ancestry.com
DNA Connections
It may be possible to confirm family relationships with Nathaniel by comparing test results with other carriers of his ancestors' Y-chromosome or mitochondrial DNA. Y-chromosome DNA test-takers in his direct paternal line on WikiTree: It is likely that these autosomal DNA test-takers will share DNA with Nathaniel: 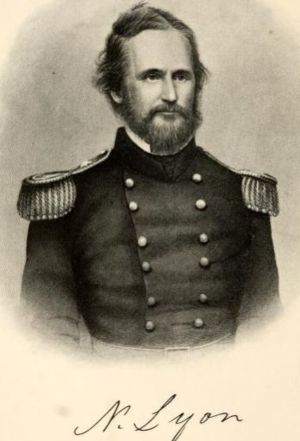 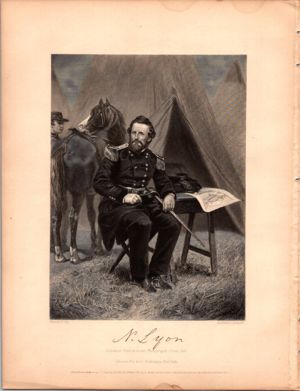