Cinaed (Kenneth I) "Cináed mac Ailpín, King of Picts and Scots" of Scotland formerly MacAlpin
Born about 0810 in Scotland

Kenneth I (MacAlpin) of Scotland is a member of House of Alpin.

Kenneth MacAlpin is generally regarded as the founder of medieval Scotland. He was the son of Alpin mac Eochaid (Alpin the son of Achay in John of Fordun). The name of his mother is not provided in source although there is mention that she may have been a daughter of Achalas, King of Argyllshire, or a Pictish princess. His father is thought to have been killed in 831, in battle with the Picts after a reign of three years after which he was beheaded.

There is considerable debate on his origins and Kenneth's origins are unproven, as are his ties, if any, to previous kings of the Picts or Dál Riata. If this an area of interest there is a discussion on the usefulness of source material in Skene's Work: Chronicles of the Picts, chronicles of the Scots, and other early memorials of Scottish history from page cxxiii. [1] Robertson also includes a discussion on the methods of electing a King for both Kingdoms of relevance. [2]

There is little certainty provided in source material regarding his early life and much of the source work is conflicting. The Norwegian invasions and raiding, Vikings, was prevalent across all of northern Scotland and the western Isles. The old Kingdom of Dalriadan Scots had been near destroyed and was isolated from its origin in Ireland. Many had fled to Galloway and it is thought that it was to Galloway that Alpin, the last king of Scottish Dalriada had fled. [3]

Kenneth may have assumed the throne of Dalriata (Dalriete regnum) two years before taking the throne of the Picts (Pictaviam) although there is doubt. The opportunity, to become King of the Picts, arose from the defeat of the Picts, by the Norwegain forces in 839 where "the death of king Uen, son of Óengus of Fortriu, his brother Bran, Áed mac Boanta, and others almost innumerable."

There is a notice of what became known, in legend, as MacAlpine's treason where "At a banquet at Scone, Kenneth murdered the seven Earls of the Scot's kingdom of Dalriada, who might have lead opposition to his claim to be King of Scots and Picts, marking what was hoped to be the end of the conflict. " Some sources suggest it was the Pictish Earls that were killed. There is no certainty of the event, although an event is plausible. What is known that, at some point, around 844, likely over a period, he became the first King of the joint Kingdoms.

The 11th century Synchronisms of Flann Mainistreach name (in order) "Cinaet mac Ailpin…Domnall mac Ailpin, Custantin mac Cinaeta, (Aedh mac Cinaedha), Girg mac Dungaile, Domnall Dasachtach (mac Custantin)" as Scottish kings, dated to the 9th and 10th centuries, adding that "Kenneth son of Alpin…was the first king who possessed the kingdom of Scone, of the Gael. In doing this he created a tradition in that the seat of the Kings of Scotland is moved to Scone, once the ancient heartland of the Kingdom of the Picts. The throne of the King of Scotland based on a slab of stone which Scottish myth suggests was carried by the Celtic tribes since their origins in Spain, brought to Tara in Ireland, built into the wall of Dunstaffnage Castle and then brought to Scone.

MacAlpin created his capital at Forteviot (mod. Scone), in Pictish territory; then moved his religious centre to Dunkeld, on the River Tay, in present-day Perthshire. In 849 he transferred relics of Columba, which may have included the Monymusk Reliquary, transferred from Iona to Dunkeld, likely to protect them from Norwegian raids.

He ruled for 16 years, according to most. The Chronicle of the Kings of Alba reports that he invaded Saxonia six times, captured Melrose and burnt Dunbar, and also that Vikings laid waste to Pictland, reaching far into the interior. His time on the throne was certainly turbulent. The Britons of Strathclyde burnt Dunblane; the Norwegians and Danes harried and burnt Dunkeld and Clunie in Perth & Kinross. According to some sources his major protagonist was Ragnar Lodbroc.

The Annals of Ulster record the death in 858 of "Cinaed son of Ailpín king of the Picts". [4] The 10th century Pictish Chronicle Cronica de Origine Antiquorum Pictorum suggests he died in the Ides of February, on the third day of the week; and the Ides of February fell on a Tuesday, in the year 860. [5] He died of a "tumour" at "Forteviet", likely Scone and was buried at Iona at the church of St. Columba.

He was succeeded by his brother, Donald.

The name of his wife is not provided in source material. They had four children:

Death: 858 and "Because Cináed with many troops lives no longer there is weeping in every house; there is no king of his worth under heaven as far as the borders of Rome." [7]

Sponsored Search by Ancestry.com
DNA Connections
It may be possible to confirm family relationships with Kenneth I by comparing test results with other carriers of his Y-chromosome or his mother's mitochondrial DNA. Y-chromosome DNA test-takers in his direct paternal line on WikiTree:

Kenneth I (MacAlpin) of Scotland 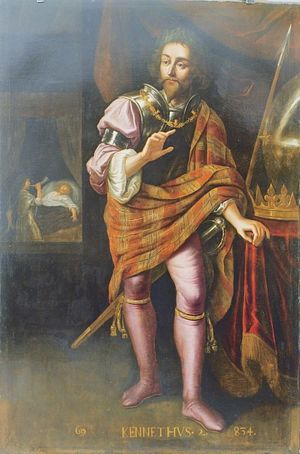 Bobbie (Madison) Hall
This profile has more than the recommended number of managers. We'd like to ask that if you're not currently researching it, don't have a pre-1500 badge, or have little interest in further development of it, that you'll consider changing yourself to the Trusted List.

Valerie Willis
MacAlpin-11 and UNKNOWN-10326 appear to represent the same person because: these two profiles MUST be merged as the tail end of a parallel upload of Dal Riata Kings. A SEPARATE profile (or series of profiles) should be created for the Pictish Kings.
posted Oct 01, 2018 by Valerie Willis
[Living Scott]
I agree with your comment below Doug as far as 2 Mixed Individuals, i also notice some one has Listed Wikipedia for sources,

i dont think Wikipedia should ever be used for Geaneology as any one can edit the info and wrong info can therefore be replicated.

https://www.surnamedna.com/wp-content/uploads/2017/06/DNA-vs-Irish-Annals-2017.web_.pdf The Dalriada Lineage should go back to Naill of Nine Hostages, The Lineage is in this Book Below that also mentions the Origins of many Surnames such as Gallagher, McLaughlin and many others. Book below should be consulted for Kenneth's Ancestry See Kenneth page 39 https://archive.org/details/irishpedigreesor_01ohar

Lance Osbourn
I have discovered I have a unique genealogy I'm trying to figure out how to add to my profile the tartans of the different Clans my genealogy is linked to, thanks
posted Apr 26, 2018 by Lance Osbourn
[Living Scott]
See Page 32 Here http://www.surnamedna.com/wp-content/uploads/2014/10/DNA-vs-Irish-Annals-2014.pdf

Read Antiquity of the Name of Scott by Martin Bowen Scott http://freepages.genealogy.rootsweb.ancestry.com/~ncscotts/Scott%20Genealogy/Books,%20Articles,%20etc./Antiquity%20of%20the%20Name%20Scott.pdf

Kenneth I is 27 degrees from Cecil B. DeMille, 31 degrees from Rosalie Neve and 18 degrees from Henry VIII of England on our single family tree. Login to find your connection.