Margaret, born in 1813, was the second of five children born to Hugh MacDonald and Helen Shaw. She was christened on 7 July 1813 at their parish in Glasgow, Lanarkshire, Scotland, United Kingdom. [1]

Her mother was described as a woman of great intellectual power and strong personality, however had a gentle manner and a great sense of humour. She had masculine features and a large frame with large eyes full of intelligence. [2]

Margaret's family made the decision to emigrate to Kingston, Upper Canada. The journey was very long, starting with their 42-day voyage on the 'Earl of Buckinghamshire' in early April 1820. There were 600 people on board including her paternal grandmother and several of her mother's relatives. After 42 days at sea, in steerage, they arrived on 20 May 1820 in Quebec. [3] But, that wasn't the end of their journey.

They then boarded Durham boats that were sailed, rowed on the river and canals, or drawn by horses or oxen when the currents were swift. Many passengers died from the elements, and there was always a risk of little children falling overboard. They set up camp along the riverside and cooked over a fire during their three-week journey.

Upon docking, they still needed to wait several days for waggoners to transport them and their belongings to Kingston. [3] On 13 Aug, over two months after leaving their home in Scotland, her family arrived at the home of Lt. Col. Donald Macpherson where they would stay in his two-storey stone house at the corner of Bay and Montreal Streets in Kingston, Frontenac. [4]

Sadly, in 1822 a servant who was caring for the small children hit her little brother James so hard that he was killed by the force of it.

After living in Kingston for about 5 years her family moved to the Bay of Quinte, about 30 miles from Kingston where the family homesteaded on some land just 80 feet from the water's edge.

Margaret (or "Moll", as her siblings called her), John and Louisa walked 3 miles each morning and evening to attend the local school in Adolphustown.

Louisa and Margaret were talented singers and their family were the only ones with a piano in those days and they would perform for their neighbours together.[5]

Her father passed away unexpectedly on 29 Sep 1841 from a brain hemorrhage when she was 28 years old.

In 1847 she became an Aunt to her brother's first child Johnny and the first grandchild born to their family. There was an accident and he passed away about 2 years later. In 1850 her brother had another baby boy Hugh John Macdonald.

My Dear Margaret, I received your kind and considerate letter of congratulation. We have got our Johnnie back again—almost his image. I don’t think he is so pretty, but he is not so delicate. Isa was very anxious that he should get his own name again, for she considers him almost the same being, but I think it right that the feelings of those we esteem should not be outraged by doing so. Mamma, Maria, Mrs. Greene, and many others have a prejudice against the re-naming a child. What his name may be, therefore, we will leave to be settled until you come up. Mrs. Geene and you will arrive about the same time, and I will leave it to the female conclave.

I need not say that your presence is anxiously looked for. Mamma had one of her attacks on Friday (Good Friday), and it still hangs about her to an unsafe extent. She seems lethargic and not so free of speech as before, but I trust the active treatment she is under may set her up again. Meanwhile, it is well to be always prepared for the worst news, and if anything went wrong I would not hesitate to advise you of it at once by telegraph.

My poor friend Charles Stuart is very low. How long he may live I know not. His fate is decided. He may live until autumn. He may die to-morrow. For my part, I fear the worst. When I go to bed at night I fear to hear of his death in the morning. He refuses to take all advice and all medicine except from myself, and I get thoroughly scolded and abused for the peremptory manner in which I play the doctor. I trust the Wilsons are in some degree calmed down and able to bear the recollection of their loss. I can sympathize with them fully. They lost their last child. I lost my only one, and when I lost him I never expected another. This is a sad enough letter, but such letters become common as people get older. Tho’ yet a young many, many, very many, of my companions have disappeared, and my firmest and best friend is about to leave me. Isa, who is not at all well, and who lingers very much in her recovery, joins me in love to you.

Always, my dear Margaret,
Your affectionate brother,
John A. MacDonald

P.S.—I have used mourning paper since poor Jane’s death. Lest it might frighten you, I have written ‘All well’ round the seal. [6]

The child's mother was quite ill and when she passed away, John entrusted his son's care to his sisters, Louisa and Margaret, as well as Margaret's husband, James Williamson, a mathematics professor at Queen's University.

Margaret married Rev. James Williamson on 19 Oct 1852 at Kingston's St. Andrew's Presbyterian Church in Kingston, Frontenac, Ontario. Robert Neill and A Harper were witnesses. James Williamson was a widow with a son who relatives raised in Scotland and England. [7]

Her husband leased a large and comfortable stone house on Queen Street, just around the corner from Helen's home on Barrie Street., but four months later they moved in with Helen and Louisa due to some financial challenges. And, then a fire consumed their home on Brock Street and they moved into a house on Collingwood Street for a time.

Margaret and James had no children of their own and became very fond of their surrogate son Hugh, who went on to become premier of Manitoba. But Margaret was living under the same roof with several very strong-willed people, her mother, husband and sister Louisa, specifically. In Oct 1860 there was a large family dispute between Louisa and her husband. Her brother interfered and suggested the family move into separate homes again. At the time Margaret was already beginning to suffer from lung problems. [8]

When their mother was 72 years old she had a severe stroke, followed by another twelve strokes in the 13 years following, prior to her death in 1862. [2]

Margaret's lung trouble became worse as the years progressed and in the latter years of her life she became bed-bound.

Margaret Williamson died at home, in bed at Heathfield in Kingston with her husband and family by her side on the morning of 19 Apr 1876 in her 62nd year. [9] [10]

ask our community of genealogists a question.
Sponsored Search by Ancestry.com
DNA
No known carriers of Margaret's ancestors' DNA have taken a DNA test.

Images: 2
The MacDonald Homestead at Adolphustown 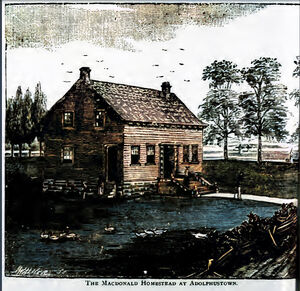 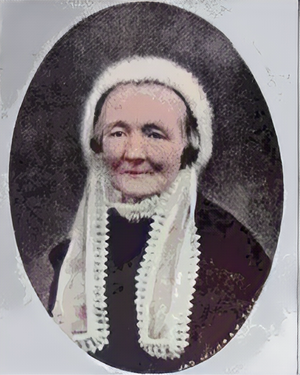