If you have any information to add to this profile please offer it up! While there are no privacy settings preventing modification of this page, it is strongly suggested that you contact one of the profile managers listed above in the spirit of WikiTree's first principle: collaboration.

A report from September 1836 written by the Rev. William MacRae, the parish minister in Barvas described his community down to very fine details. From topography to climate and other geographic features, as well as the economic and social structure of the village, including the church, education, agriculture, and personal habits are all documented from the time period. All of the info can be applied to the lifestyle our ancestors lead since they were residing in a neighbouring settlement called South Bragar. We can accurately imagine

"...the men are all well-proportioned, hardy, robust, and healthy, and the women are modest, comely and many of them good-looking. The inhabitants are middle size, of a sallow complexion, probably occasioned by the peat smoke in which they are constantly enveloped. Gaelic is the only language, and has been from time immemorial; and it is spoken, in the opinion of competent judges, with grammatical correctness and classical purity. In their habits, much cleanliness can scarcely be expected, considering their poverty and the wretchedness of their habitations, especially while the present system, which has prevailed for ages, continues, of having the cattle under the same roof with themselves, entering at the some door, and allowing their manure to accumulate without being removed except once a year. Their mode of living most closely approaches the pastoral - without arts, trade, or manufacture, navigation or literature, their whole round of duty consists in securing fuel, in sowing and reaping their scanty crops and in rearing their flocks, and tending them at pasture. Yet in these limited circumstances, while supplied with food and clothing of the plainest description, and able to pay their rents, their simple cottages are abodes of happiness and contentment. Blue kelt is almost the only dress worn by the men and stuffs variously striped, by the women, with under dresses of plaiding, all home made. In many instances, however, cotton shirts and print gowns are beginning to supersede the use of some of these articles. The formation of the female habits, with their whole appearance, closely resembles that of the "Wandering Bavarians" or Swiss “buy a broom” singers, who itinerate through this country. Their ordinary food consists of oat and barley meal, potatoes and milk, variously prepared. Their domestic economy is frugal and moderate beyond conception. The produce of a foreign soil, as tea, coffee, and sugar, and the common conveniences of art, as knives, forks, &c. are to them altogether alien. They are remarkable for sobriety and hospitality in their own sphere; posses vivacity of intellect, acuteness and sagacity, and are tainted with few vices except such as poverty in similar circumstances begets. They are in general, tolerably well-versed in the Scriptures, and afford several examples of uprightness and piety.

Is Murdo your ancestor? Please don't go away!

ask our community of genealogists a question.
Sponsored Search by Ancestry.com
DNA Connections
It may be possible to confirm family relationships with Murdo by comparing test results with other carriers of his Y-chromosome or his mother's mitochondrial DNA. However, there are no known yDNA or mtDNA test-takers in his direct paternal or maternal line. It is likely that these autosomal DNA test-takers will share some percentage of DNA with Murdo: 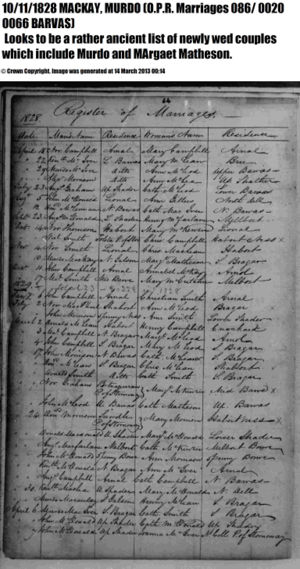 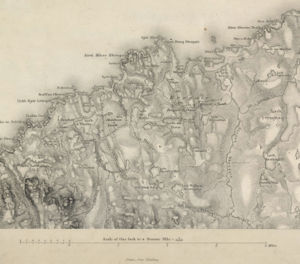 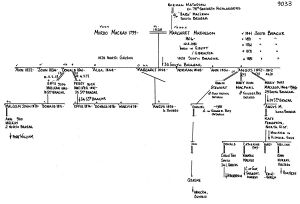