Mathew Machell's elder brother John was born in 1545 (calculated from father John Machell's 1559 Inquisition post mortem), Matthew was the second son (per his father's will), so presumably born in the neighborhood of 1547. Matthew Machell married Mary Lewknor in 1568, so 21 years earlier -- 1547 -- is chosen as a guesstimate for Mathew's birth.

Mathew's parents John Machell, Alderman of London, and wife Jone, are identified as the parents of John Machell of Hackney, Middlesex, who sued Matthew Machell sometime between 1587 and 1591 regarding the "manors of Guilden Sutton, Cheshire; and Burneside [Burnside],Westmorland; and property in Wood Street, St Peter Westcheap and elsewhere in London; Tottenham, Middlesex; Hatfield, Hertfordshire; Hinton Admiral, Hampshire and Dorset; Sandbach, Holmes Chapel and Goostrey, Cheshire."[2]

According to Burke's Landed Gentry, vol. 2 (1871), p. 851, Matthew Machell of Hatfield, son of Sir John Machell by Jane Luddington, married 1st "a Miss Cotton," and had "an only son, John Machell of Tangley, who married Jane, dau. of Sir Nicholas Woodroofe;" and Matthew Machell's second wife was Mary Lewknor.[4]

If this is correct, then Mathew was presumably 19 or 20 when he first married, and then his wife presumably died in childbirth and Mathew remarried soon after. (The first wife of Mathew's elder brother John was a Cotton.)

However, Douglas Richardson has pointed out that John Machell was made the ward of ... in 1598 and was recognized as an adult in 1602.

The entire text of Richardson's file on Mathew Machell follows:

MARY LEWKNOR, married by license dated 1 July 1568 MATTHEW MACHELL (or MAUCHELL), Esq., of St. Michael Queenhithe, London, Hatfield, Hertfordshire, and Shacklewell (in Hackney) and Tottenham, Middlesex, Citizen and haberdasher of London, younger son of John Machell, Citizen and haberdasher of London, Sheriff of London, 1555–6, Alderman of London, 1556–8, by Jane (or Joan), daughter of Henry Luddington, Gent. He was born after 1545. They had one son, John, Gent. (born c.1581 [minor in 1598, of age in 1602]), and five daughters, Dorothy, Jane (wife of Henry Walsh), Elizabeth (wife of John Cave), Ann (wife of _____ Gibbs), and Mary. Sometime the period, 1558–1603, Matthew Machell, Esq. sued James Walton in Chancery to recover rights as lord of the manor; a tenement holden of the manor of Guilden Sutton, Cheshire late the estate of John Machell, plaintiff Matthew Machell’s father, and which on his death descended to plaintiff Matthew Machell. In the period, 1558–1603, Matthew Machell, Esq., sued [John] Machell, Esq., and Elizabeth Bowyer, widow, in Chancery regarding a claim under a will; a messuage at Hackney and land there, holden of the manor of Hackney, Middlesex; also the manor of Guilden Sutton, Cheshire and lands in Sandbach Goserye and Holme, Cheshire, with the tenths of grain, in the parish of Sandbach Goserye, late the estate of John Machell, the plaintiff’s father. In 1570 Queen Elizabeth I sued Matthew Machell regarding money lent by the said Matthew to Thomas Lord Wentworth for the supposed sale of sugar to Lord Wentworth agreed upon by the defendant and Robert Savadge to escape the penalties of the statute of usury. In 1572 Ralph Woodcock sued him in Chancery to protect the plaintiff's title by lease; a messuage and lands in Guilden Sutton, Cheshire, demised by John Machell deceased, father of the defendant, to the plaintiff and others for their life. Their daughter, Dorothy Machell, was a legatee in the 1587 will of her grandmother, Dorothy (Wroth) Lewknor. In the period, 1587–91, John Machell (son of John Machell, citizen and Alderman of London and Jone Machell his wife) sued Matthew Machell regarding the manors of Guilden Sutton, Cheshire, and Burneside [Burnside],Westmorland; and property in London; Tottenham, Middlesex; Hatfield, Hertfordshire; Hinton Admiral, Hampshire; Sandbach, Holmes Chapel and Goostrey, Cheshire; and Dorset. In the period, 1587–92, Henry Masham had a dispute with Matthew Machell, John Machell, and Elizabeth Bowyer. MATTHEW MACHELL, Esq., died 23 August 1593. On 1 Feb. 1598 Francis Harvy was granted the wardship and marriage of John Machell, son and heir of Matthew Machell; with an annuity of 10 from 23 August 1593 when Matthew died, to be assigned from lands in Tottenham, Middlesex, in the parish of St. Michael in Quenehithe within the City of London, and in Hatfield, Hertfordshire. On 3 June 1602 license was granted for John Machell, son and heir of Matthew Machell, to enter his lands, he receiving issues from the time he had attained age 21.

The pedigree of the Machell family of Kendal at the end of Edward Bellasis's The Machells of Crackenthorpe (1886) states that Matthew Machell "of Hackney and Hatfield, and London, haberdasher," had son John and daughters Joan, Elizabeth, Mary, Ann and Dorothy. The chart shows Mary Lewknor the mother of the children, but notes that some make "Miss Cotton.. the mother of the issue below."[7]

A further problem is Bellasis's unsupported assumption that Mary (Machell) Cudworth) was the daughter of Mathew, and not his brother John. Bellasis gives documentation (indicating documents held by the Harleian Society_ at several places on this pedigree, but none for daughter Mary. Perhaps one of Bellasis's sources showed a daughter Mary without showing who she married, and Bellasis simply assumed that she was the Mary Machell who married Ralph Cudworth.

However, after Mathew Machell died in 1593, it appears that his widow Mary returned to her family estate at Kingston Bowsey, Sussex, where she was buried in 1604. Mary's brother Edward, the head of the family, died the following year. Mary's daughter Elizabeth was apparently sent to live with Mary's sister Hester, who had married Robert Quarles in 1601 at Denham, Suffolk. Elizabeth Machell married John Cave (as also indicated on Bellasis's pedigree chart) on 22 Oct. 1608 at Denham, Suffolk.[8]

It appears that Mathew and Mary (Lewknor) Machell also had a younger daughter Mary, "Marie Mashall" of Kingston-by-sea married James Harington on 3 Feb. 1617/18.[10] The license for this marriage identifies James Harrison as a "clerk" of Stanmer, and gives the wife's name as Mary Mascoll of Kingston Bowsey -- the name of the manor, as opposed to the parish of Kingston-by-sea.[11] The online transcripts show no other Mashall or Machell or Mascoll, etc. records in the area of Kingston Bowsey. However, there was a Mascoll/Mascall family inland, in the area of Coldwaltham, so perhaps whoever recorded the marriage license misspelled Mary's surname with the known spelling of a family that lived in the area.

Is Mathew your ancestor? Please don't go away!

ask our community of genealogists a question.
Sponsored Search by Ancestry.com
DNA
No known carriers of Mathew's DNA have taken a DNA test. 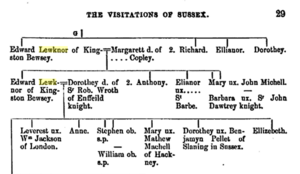 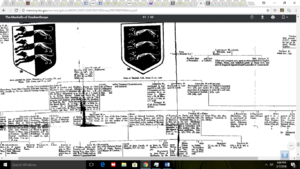 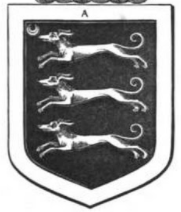 Leave a message for others who see this profile.
There are no comments yet.
Login to post a comment.
[Living Schmeeckle]
Actually, it seems more likely that this John (bapt. 1579) was the son of John and Mathew's younger brother Thomas, who was buried in Hackney in 1581, leaving behind a four-year-old son Francis (per Bellasis).
posted May 02, 2018 by [Living Schmeeckle]
Charlene Newport
That is another possibility, the baptism record doesn't record the parent's names.

Without additional evidence, we can't confirm which John Machell it belongs to.

Added a source for the possible baptism of son John.