Father of James Madison, 4th President of the United States

James Madison, Sr. (March 27, 1723 – February 27, 1801) was a prominent Virginia planter, who served as a colonel in the militia during the American Revolutionary War. He inherited Mount Pleasant, later known as Montpelier, a large tobacco plantation in Orange County, Virginia and, with the acquisition of more property, had 5,000 acres and became the largest landowner in the county. He was father to U.S. President James Madison, who inherited what he called Montpelier.[1]

James Madison, Sr, was the son of Ambrose Madison and his wife Frances Taylor, and was born in 1723 (March 27, 1722[2] in Orange County, Virginia. When he was nine, his family moved to their new plantation of Mount Pleasant in 1732. His father had hired slaves and an overseer to clear it, work that had been going on for five years to establish cultivation. That summer (1732) his father died at age 36 in August after a short illness.[1]

There is a letter from Edmund Pendleton, attorney (later Chief Justice of the Court of Appeals of Virginia) to James Madison (father of the President) dated January 15, 1762 that is lodged in the Gilder Lehrman Collection of the Gilder Lehrman Institute of the New York Historical Society, item # GLC00099.017.

"... I am of the opinion that on the marriage of one of the children of Mr. Ambrose Maddison the estate lent his wife til that time should have been divided according to the Act of Distributions, the law the testator refers to, that is one third of the slaves to the wife for life & one third of the personal estate as her absolute property. The other two thirds of the slaves descended to the son he paying his sisters each a third of the value thereof as appraised, and the two thirds of the personal estate was to be equally divided between all the children. At the death of the mother her slaves descended to the son without his paying anything for them. Then in my opinion the estate should have been divided, but it seems it was not for at the time appointed the mother took a fourth part only and the residue slaves as well as personal estate was equally divided between the three children and now the mother is dead intestate...." [4]

Sponsored Search by Ancestry.com
DNA Connections
It may be possible to confirm family relationships with James by comparing test results with other carriers of his Y-chromosome or his mother's mitochondrial DNA. However, there are no known yDNA or mtDNA test-takers in his direct paternal or maternal line. It is likely that these autosomal DNA test-takers will share some percentage of DNA with James: 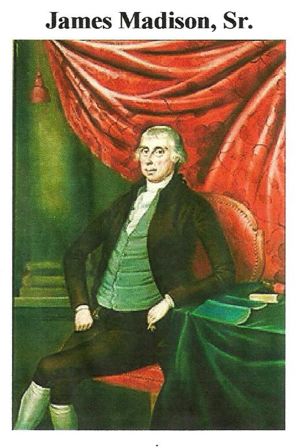 Leave a message for others who see this profile.
There are no comments yet.
Login to post a comment.
Amy Wilson
Madison-415 and Madison-2 appear to represent the same person because: suggested by another user
posted Aug 11, 2015 by Amy Wilson

Robin Lee
Based on death date, I think this was intended to be his father That would make having a child born a year after this person's birth seem reasonable
posted Aug 09, 2015 by Robin Lee

Vic Watt
Madison-1 and Madison-415 appear to represent the same person because: There is something wrong here. The birth dates are the same but the death dates are different.
posted Aug 09, 2015 by Vic Watt