Eleanor "Nelly" Conway Madison was a younger sister of James Madison, Jr., who would go on to become President.

After the wedding, the couple traveled directly in "a yellow chariot, with horses tandem, and mounted postilions" to their home at the "Old Hall" which was about four miles from Long Meadows, Frederick County, Virginia. Old Hall was a two-story wooden building said to be older than the first house at Long Meadows built by Isaac Hite Sr. in 1740. [1] Possibly, Old Hall was the first home built by Baron Heydt soon after his arrival in the Shenandoah Valley.

"I am a volunteer at Belle Grove Plantation near Middletown, Virginia. The information on this page is incomplete per our records there. Nelly died there at the home built by Major Isaac Hite, Jr. on the date you give. But she didn't die in Orange, VA. Also, they had three children in 1788, she had James Madison Hite who died at age three. In 1789, she had Nelly Conway Hite who died in 1830 and in 1793 another James Madison Hite was born and named in honor of his deceased older brother, this second one died in January 1860. She passed away there in her home on December 24 and is buried in the Hite family graveyard at nearby Long Meadow which was Isaac Hite, Sr.'s home. This information and more is available at the Hite's Belle Grove Plantation which I believe was named after her grandmother's place by a similar name. dated 4/20/14 by Doris (ddgm at comcast.net)"

Is Nelly your ancestor? Please don't go away!

ask our community of genealogists a question.
Sponsored Search by Ancestry.com
DNA Connections
It may be possible to confirm family relationships with Nelly by comparing test results with other carriers of her mitochondrial DNA. However, there are no known mtDNA test-takers in her direct maternal line. It is likely that these autosomal DNA test-takers will share some percentage of DNA with Nelly: 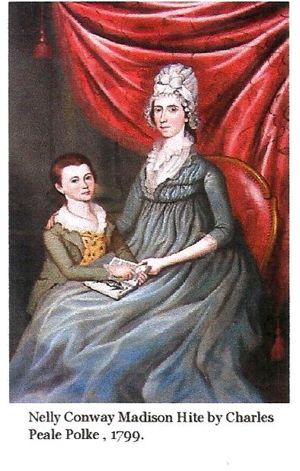 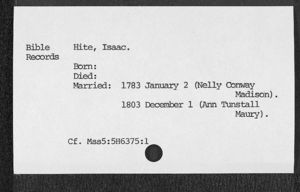 Categories: Siblings of US Presidents