The Portuguese explorer who organized the Spanish expedition to the East Indies that resulted in the first circumnavigation of the Earth.

Magellan was born around 1480 in Portugal, either at Vila Nova de Gaia, near Porto, in Douro Litoral Province, or at Sabrosa, near Vila Real, in Trás-os-Montes e Alto Douro Province. He was the son of Rodrigo de Magalhães, Alcaide-Mor of Aveiro (1433–1500, son of Pedro Afonso de Magalhães and wife Quinta de Sousa) and wife Alda de Mesquita and brother of Leonor or Genebra de Magalhães, wife with issue of João Fernandes Barbosa. After the death of his parents during his tenth year, he became a page to Queen Leonor at the Portuguese royal court because of his family's heritage.

In Seville he befriended his countryman Diogo Barbosa and soon married his daughter by his second wife María Caldera Beatriz Barbosa. They had two children: Rodrigo de Magalhães and Carlos de Magalhães, both of whom died at a young age. His wife died in Seville around 1521.

On his voyage of circumnavigation, on the morning of 27 April 1521, Magellan sailed to Mactan (Philippines) with a small attack force. During the resulting battle against Lapu-Lapu's troops, Magellan was struck by a bamboo spear, and later surrounded and finished off with other weapons. 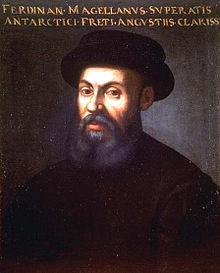