Mąguwįga is listed in the 1898 census as being 80 years old, and therefore was born about 1818, although her tombstone indicates she was born in 1828. She is the daughter of Red Bird Woman and father unknown, and passed away 16 April 1911 and buried at McPherson Union Cemetery, St Clair, Blue Earth County, Minnesota (Mrs. John Dovine).

In the 1898 Indian census, her name is given as Ma-coo-win-kaw; which is consistent with Ma-go-win-kaw. Both transcriptions are attempts to render the name Mąguwįga, Earth Coming Woman, a Bear Clan name. (Radin, 237)

She was allotted 160 acres of land on the Winnebago reservation in Nebraska that was willed to her half-niece, Josephine Manaige.

All the censuses from 1898 to 1910 show her to have resided at the Winnebago Agency in Winnebago, Thurston County, Nebraska.

Given her age, and the exodus of the Nebraska branch of the tribe, she must have lived near her half-sister, Angelique Decorah Manaige in Blue Earth back in the 1850s. Her dates are given as 1828 to 16 April 1911. It is well known that many individual of the tribe lied about their age to census takers, either because they were married before their majority, or because of the prestige of great age. So adding precisely a decade to her life is not unusual. Mrs. John Dovine is buried at McPherson Union Cemetery, Saint Clair, Blue Earth County, Minnesota, USA. (Find a Grave)

Is Mąguwįga your ancestor? Please don't go away!

ask our community of genealogists a question.
Sponsored Search by Ancestry.com
DNA Connections
It may be possible to confirm family relationships with Mąguwįga by comparing test results with other carriers of her mitochondrial DNA. However, there are no known mtDNA test-takers in her direct maternal line. It is likely that these autosomal DNA test-takers will share some percentage of DNA with Mąguwįga: 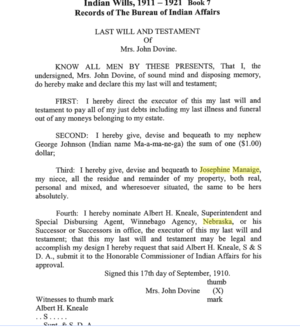