Magritte's earliest paintings, which date from about 1915, were Impressionistic in style. During 1916–1918, he studies at the Académie Royale des Beaux-Arts in Brussels. The paintings he produced during 1918–1924 were influenced by Futurism and by the figurative Cubism of Metzinger.

From December 1920 until September 1921, Magritte serves in the Belgian infantry in the Flemish town of Beverlo near Leopoldsburg.

In June 1922, Magritte marries Georgette Berger, whom he had met as a child in 1913. In 1936 Magritte's marriage becomes troubled when he meets a young performance artist, Sheila Legge, and began an affair with her. Magritte arranges for his friend, Paul Colinet, to entertain and distract Georgette, but this leads to an affair between Georgette and Colinet. Magritte and his wife did not reconcile until 1940.

In 1922–1923, Magritte works as a draughtsman in a wallpaper factory, and is a poster and advertisement designer until 1926, when a contract with Galerie Le Centaure in Brussels made it possible for him to paint full-time. In 1926, Magritte produces his first surreal painting, The Lost Jockey (Le jockey perdu), and holds his first solo exhibition in Brussels in 1927.

Depressed by the failure, he moves to Paris where he becomes involved in the Surrealist group. He becomes a leading member of the movement, and remains in Paris for three years. In 1929 he exhibits at Goemans Gallery in Paris.

On 15 December 1929 he participates in the last publication of La Revolution Surrealiste No. 12.

Galerie Le Centaure closes at the end of 1929, ending Magritte's contract income. Having made little impact in Paris, Magritte returns to Brussels in 1930 and resumes working in advertising. He and his brother, Paul, form an agency which earns him a living wage.

In 1932, Magritte joins the Communist Party, which he periodically leaves and rejoins for several years.

In 1936 he had his first solo exhibition in the United States at the Julien Levy Gallery in New York, followed by an exposition at the London Gallery in 1938.

During the German occupation of Belgium in World War II he remains in Brussels. He briefly adopta a colorful, painterly style in 1943–44, an interlude known as his "Renoir period", as a reaction to his feelings of alienation and abandonment that came with living in German-occupied Belgium.

In 1946, renouncing the violence and pessimism of his earlier work, he joina several other Belgian artists in signing the manifesto Surrealism in Full Sunlight. During 1947–48, Magritte's "Vache period," he paints in a provocative and crude Fauve style. During this time, Magritte supports himself through the production of fake Picassos, Braques, and de Chiricos—a fraudulent repertoire he later expands into the printing of forged banknotes during the lean postwar period. This venture was undertaken alongside his brother Paul and fellow Surrealist and "surrogate son" Marcel Mariën. At the end of 1948, Magritte returns to the style and themes of his pre-war surrealistic art.

Magritte dies of pancreatic cancer on 15 August 1967, aged 68, and is interred in Schaerbeek Cemetery, Evere, Brussels.

Is René your ancestor? Please don't go away!

ask our community of genealogists a question.
Sponsored Search by Ancestry.com
DNA
No known carriers of René's ancestors' DNA have taken a DNA test. 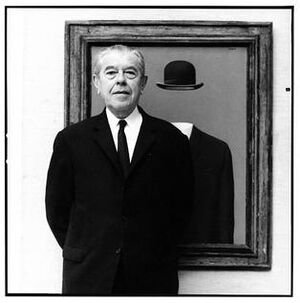 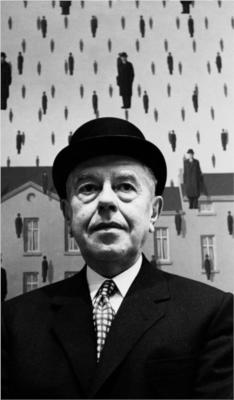