Jeb was born in 1934. He was the son of Donald Magruder and Edith Wolverton. He passed away in 2014.

Jeb Stuart Magruder (November 5, 1934 – May 11, 2014) was an American businessman and high-level political operative in the Republican Party who served time in prison for his role in the Watergate scandal.

He was named after Confederate General J.E.B. Stuart.

Is Jeb your relative? Please don't go away!

ask our community of genealogists a question.
Sponsored Search by Ancestry.com
DNA Connections
It may be possible to confirm family relationships with Jeb by comparing test results with other carriers of his ancestors' Y-chromosome or mitochondrial DNA. Y-chromosome DNA test-takers in his direct paternal line on WikiTree: 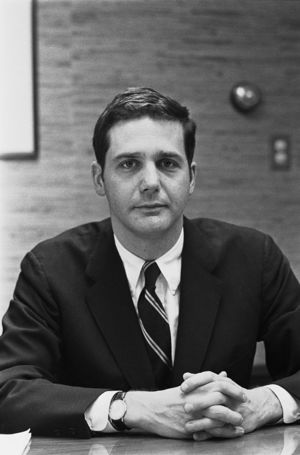 Jeb is 21 degrees from Peter Roberts, 16 degrees from Emma Smith and 17 degrees from Henry VIII of England on our single family tree. Login to find your connection.