Sir James Maitland was a member of the aristocracy in British Isles.

James Maitland, 8th Earl of Lauderdale
KT PC (January 26, 1759 - September 10, 1839), was a representative peer for Scotland in the House of Lords.
Born at Haltoun House near Ratho on January 26, 1759,[1] the eldest son and heir of James Maitland, 7th Earl of Lauderdale, whom he succeeded in 1789, he became a controversial Scottish politician and writer. His tutor had been the learned Dr. Andrew Dalzel, and James Maitland then attended the universities of Edinburgh and Glasgow, completing his education in Paris where, it is said, he became radicalised.
Parliamentary career
Upon his return home in 1780 he was admitted a member of the Faculty of Advocates and successfully stood for election to parliament the same year. From 1780 until 1784 he was a Member of Parliament representing Newport and from 1784 to 1789, Malmesbury. In the House of Commons he supported the prominent Whig Charles Fox and took an active part in debate, and was one of the managers of the impeachment of Warren Hastings.
From 1789, in the House of Lords, where he was a representative peer for Scotland, he was prominent as an opponent of the policy of Pitt and the English government with regard to France. He was a frequent speaker and also distinguished himself by his active opposition to the Habeas Corpus Suspension Act., the Sedition Bill, and other measures. Upon the outbreak of the French Revolution, of which he was thought to be in sympathy, he ostentatiously appeared in The House in the rough costume of Jacobinism.
In July 1792 he fought a bloodless duel with Benedict Arnold after impugning Arnold's honour in the House of Lords. [1]
French Revolution
In 1792 in the company of John Moore, Lord Lauderdale travelled again to France. The attack on the Tulleries, and the imprisonment of King Louis XVI of France, took place three days after the earl's arrival in the French capital. After the massacres of the 2nd September, the British ambassador having left Paris, the earl left Paris on the 4th for Calais. However, he returned to Paris the following month and did not leave for London until December 5th. Upon his return from France he published a Journal during the residence in France from the beginning of August to the middle of December 1792. According to the antiquarian A. Thomson, F.S.A.,(Scot): "James Maitland 8th Earl of Lauderdale was known as 'Citizen Maitland'. An extremist, he was in Paris during the French Revolution and was a personal friend of Jean-Paul Marat. He rarely visited Scotland." The earl had helped to found the British Society of the Friends of the People in 1792.
New peerage
Upon the formation of the Grenville administration in February 1806, Lauderdale was made a peer of the United Kingdom as Baron Lauderdale of Thirlestane and sworn a member of the Privy Council. For a short time from July 1806 he was keeper of the Great Seal of Scotland.
Napoleonic treaty
On August 2, 1806 the earl, fully fluent in French, departed for France, invested with full powers to conclude peace, the negotiations for which had been for several weeks carried on by the Earl of Yarmouth. Arriving on the 5th he and Yarmouth set about the arduous task of treating with Napoleon and Tallyrand. Yarmouth was recalled on the 14th and Lauderdale was left alone. Following the renewal of hostilities he left Paris for London on October 9th. A full account of the progress and termination of the negotiations appeared in the London Gazette of October 21, 1806.
After acting as the leader of the Whigs in Scotland, Lauderdale became a Tory and voted against the Reform Bill of 1832. Lord Lauderdale was made a Privy Counsellor in 1806 and a Knight of the Thistle in 1821.
Banner dispute
James Maitland, 8th Earl of Lauderdale matriculated arms in the character of Hereditary Standard Bearer of Scotland. In 1952 the Lord Lyon decided that the Earl of Lauderdale's right was to bear the saltire as the Bearer of the National Flag of Scotland, whereas the Earl of Dundee as the Bearer of the Royal Banner bears the Royal Standard of the lion rampant.
Writings
He wrote an Inquiry into the Nature and Origin of Public Wealth (1804 and 1819), a work which has been translated into French and Italian and which produced a controversy between the author and Lord Brougham; The Depreciation of the Paper-currency of Great Britain Proved (1812); and other writings of a similar nature.
Death
He died at Thirlestane Castle, near Lauder, Berwickshire, aged 80.

He married 15 August 1782 at the home of her father St. Marys, Walthamstow, Essex, Eleanor Todd, only daughter and heiress of Anthony Todd, Secretary of the General Post Office, and his wife Anne Robinson. She had a dowry of £50,000 and her father also promised to pay £10,000 for each child born.[2]

They had nine children:[3]

Thank you to Sonja Ratliff for creating WikiTree profile Lauderdale-192 through the import of Drummond.GED on Oct 2, 2013. Click to the Changes page for the details of edits by Sonja and others. 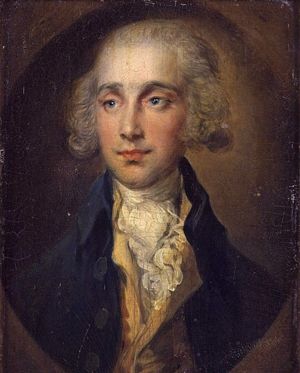