Is it right that while the gambler, the drunkard, and even the wife-beater has a vote, earnest, educated and refined women are denied it?... Is it right... that a mother... should be thought unworthy of a vote that is freely given to the blasphemer, the liar, the seducer, and the profligate? from Is it right? by Kate Sheppard pub.1892 [1]

Kate Sheppard was instrumental in achieving the right for Women to vote in New Zealand, the first self-governing country in the world to introduce universal suffrage and the first country to enfranchise women. Kate Sheppard's work had a considerable impact on women's suffrage movements in several other countries, particularly Great Britain and the United States.

By 1851, Kate's parents had settled in Islington, London, where her father was earning a living as a coal merchant. [4] Her father left the family soon after, emigrating to New York and enlisting as a private in the Union Army. He died an alcoholic in 1862. [5]

Following Kate's older sister Marie Beath, who had emigrated and married in Christchurch, New Zealand, Jemima Crawford Malcolm emigrated with her children, Frank and Robert, Kate and Isabella as cabin passengers aboard the clipper ship Matoaka; arriving in Lyttelton, Canterbury on the 8th of February 1869. [6]

Kate Wilson Sheppard became the most prominent of the New Zealand Suffragettes. She was well-known as a social reformer and writer, believing that women should participate fully in all aspects of society, including politics. She took a great interest in dress reform for women, abandoning corsets and other constrictive clothing, and encouraging others to join her in the new fashion for bicycling. [8] [9]

Kate became secretary of the Ladies’ Association, and became involved with other members of her family in temperance work. In 1885, she became a founding member of the New Zealand Women's Christian Temperance Union. It was soon realised that social and legislative reform concerning temperance and the welfare of women and children would be more effectively carried out if women possessed the right to vote, and the right to representation in Parliament. In consequence, franchise committees were formed in 1887 in local Temperance Unions, and Kate was appointed Franchise Superintendent for the Christchurch branch of the Women's Christian Temperance Union. [10]

In 1895, she became the first editor of the New Zealand edition of the "White Ribbon" - the magazine of the Women’s Christian Temperance Movement. [11]

In 1891, the Temperance Union presented a petition in favour of women's suffrage to Parliament. It was supported in Parliament by John Hall, Alfred Saunders, and the Premier, John Ballance. A second petition, larger than the first, was presented the following year. A third petition was presented in 1893 for which Kate and her fellow suffragists gathered the signatures of nearly 32,000 women. [12] Nearly two-thirds of all the women in New Zealand cast their own votes in the 1893 General Election, much to the despair of many husbands, afraid their wives would vote for Prohibition. [13] [14]

Immediately after her success in New Zealand, Kate went to England to promote the Suffrage movement there. She returned toward the close of 1895. [15] [16] Speakers at a large meeting to celebrate the Second Anniversary of the Enfranchisement of Women in New Zealand made much of the new power that Women now had to change society for the better in opposing the sale of drink. Kate Sheppard's work on behalf of the women of New Zealand in obtaining the suffrage for them, and her untiring work on behalf of the women of England was mentioned. [17]

Returning to New Zealand in 1896, Kate became co-founder the National Council of Women (NCW), and was elected its first president. [18] She fought for equality in marriage and the right for women to run for Parliament seats. She resigned from the NCW presidency in 1903 due to ill health.

Kate lived to see not only the passing of Walter in 1915 but also the passing of their son Douglas in 1910. Douglas had only been married two years but did leave Kate with her only grandchild – Margaret Sheppard.

Kate died on 13 July 1934 at her home in Christchurch. [19] She is buried with her Mother Jemima, and brother Robert Malcolm in Addington Cemetery, Christchurch. [20]

Her legacy is great; by 1925 in New Zealand alone, forty humanitarian Acts of Parliament had been passed since women had gained the franchise. Among this new and ground-breaking Acts of Parliament are the Widows Pension Act, Old Age Pension Act, State Maternity Hospital Act, Juvenile Courts had been established, a Repeal of Contagious Diseases Acts; temperance instruction had begun in schools, female doctors appointed as Medical Inspectors of schools, women appointed as Assistant Hospital Inspectors. Women are now eligible for election to Parliament, to Municipal Councils, Hospital Boards, Charitable Aid Boards, Education Boards and School Committees and there was now an Infant Life Protection Act. [21]

ask our community of genealogists a question.
Sponsored Search by Ancestry.com
DNA
No known carriers of Kate's DNA have taken a DNA test. 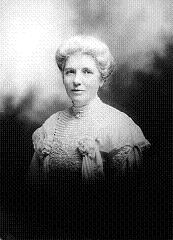 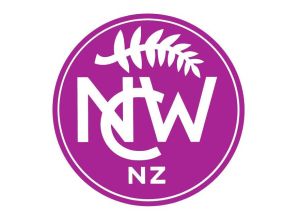 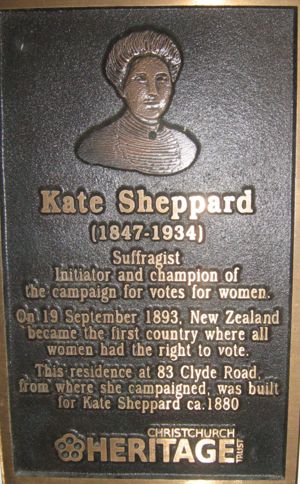 A Postcard from New Zealand - Cycling and suffrage c. 1910 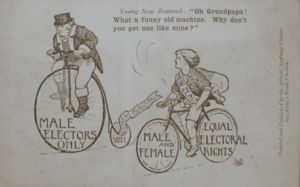 We plan on featuring Kate as the Example Profile of the Week in the Connection Finder on March 24. Between now and then is a good time to take a look at the sources and biography to see if there are updates and improvements that need made, especially those that will bring it up to WikiTree Style Guide standards. We know it's short notice, so don't fret too much. Just do what you can. A Team member will check on the profile Tuesday and make changes as necessary.

Abby (Brown) Glann
Just a quick note, it is preferred that the featured profiles in the Connection Finder each week have a Profile Manager (as opposed to being orphans) so I added the New Zealand project as manager. If the project wants to pass it off to someone else-that's okay. This isn't a judgement from the Team or anything :-)