Peter was born 20 Jun 1891 in Raymond, South Dakota. He was the son of Edward Manaige, who was employed by the railroad and Mary Kelley. He passed away 16 Aug 1933 in Butte, Montana. He had traveled to Butte with a rodeo stock provider to assist him in acquiring stock to bring back to Billings. His death certificate says he died of diabetes mellitus but his widow, Marie Harding Manaige denied that. When he died, he left his widow with three young girls. This was during the depression and Marie could not care for all three girls alone. Peter's sisters, Dorothy and Gertrude adopted Norma and Kay, respectively. The girls often got together as they grew up and continued to be close throughout their lives.


Memories: 1
Enter a personal reminiscence or story.
Sue Otness
When Peter L. Manaige died in 1933, in the the middle of the great depression, he left a widow and three young daughters. Kay was 4 1/2, Norma was 2 1/2 and Shirley was 1 1/2. Marie was teaching in one-room schoolhouses during the school year and cooking at dude ranches in the summer. She couldn't care for all three girls so Peter's sisters, Dorothy Ripley and Gertrude Gillin adopted Norma and Kay respectively, Shirley always called Norma "Rip" - from Ripley.

Peter worked as a government trapper and delivered mail. There is a location called Manaige Spring in Garfield County Montana. Peter, Leo and their father, Edward filed for homesteads near the spring.

posted 7 Dec 2019 by Sue Otness   [thank Sue]
Login to add a memory.
Is Peter your ancestor? Please don't go away! 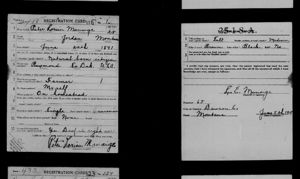 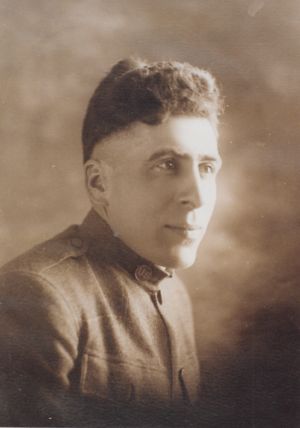 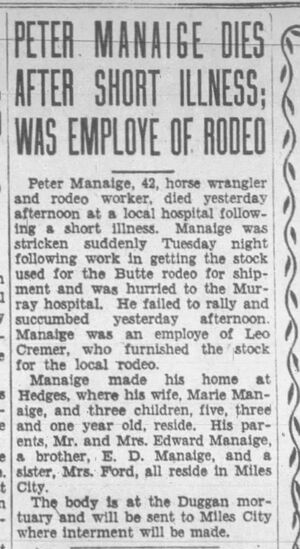