Frank was born about 1853 in Minnesota Territory, United States, to Charles A. and Mary Ann Manaige.

1857 — as a 4 year old, he was living with his parents at the Winnebago Agency in Blue Earth County, Minnesota.

1865 — Frank was living with his parents in McPherson, Blue Earth County, Minnesota.

1880 — he was living as a boarder in Mankato, Blue Earth County, Minnesota.

1910 — he was living in the house that he owned in Perry Precinct, Thurston County, Nebraska. His father Charles was living with him at the time.

1920 — he was living in a house which he owned in the village of Emerson, Perry Precinct, Thurston County, Nebraska. (census)

1930 — he is renting a room from Will Shearer in Emerson, Nebraska. (census)

1940 — he was living in an old folks' home established by the Independent Order of Odd Fellows in York City, York County, Nebraska. (census)

In 1880 he was a teamster living in Mankato, Minnesota. (census)

The following was reported in the Daily Northwestern:

Mankato, May 26 [1893] — The house of Frank Manaige at St. Clair,
fifteen miles from this city, was burned yesterday, and two
of his children, a nine-year-old girl and a two-year-old boy,
were burned to a crisp, the remainder of the family having
narrowly escaped. One child was dropped out of a second-story
widow and saved, and Mrs. Manaige saved herself by jumping
from a second-story widow. She remained in the burning house
in search of her missing children until almost overcome by smoke,
and was forced to leave. The fire originated from a gasoline stove
which the older daughter was attempting to light.

ask our community of genealogists a question.
Sponsored Search by Ancestry.com
DNA Connections
It may be possible to confirm family relationships with Frank by comparing test results with other carriers of his ancestors' Y-chromosome or mitochondrial DNA. However, there are no known yDNA or mtDNA test-takers in his direct paternal or maternal line. It is likely that these autosomal DNA test-takers will share some percentage of DNA with Frank: 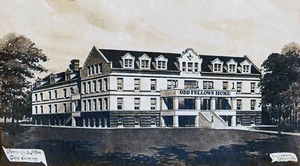