Geoffrey de Mandeville was the son of Geoffrey FitzPiers/FitzPeter and his first wife Beatrice de Say.[1][2] His birth year is not known.

Geoffrey's first wife was Maud/Matilda FitzRobert,[1] daughter of Magna Carta Surety Baron Robert FitzWalter.[1][2][3] Geoffrey remarried in January 1213/4,[1][2] so she died before then. They had no surviving children.[1]

On 3 November 1213 he was ordered to hand over the Tower of London to the Archdeacon of Huntingdon,[1] so he was presumably of full age then. The next day he paid homage to King John for his inheritance, following the death of his father the previous month, thereby becoming Earl of Essex.[1][2] His inheritance included the Barony of Pleshy, Essex[4]

In January 1213/4 (1214 in modern reckoning), Geoffrey married Isabel, Countess of Gloucester, who had previously been married to King John.[5] This appears to have been a forced marriage[1][6] and his wife would have been significantly older than him. He was persuaded to pay the vast sum of 20000 marks for the privilege.[1] This marriage made him Earl of Gloucester,[1][2] and brought him the Honour of Glamorgan[1] and the Barony of Gloucester.[6] He had no children by his second marriage.[1][5]

In 1215 Geoffrey joined the Barons who forced King John to agree to the Magna Carta,[1] of which Geoffrey was one of the Sureties.[7] In December 1215 he, along with other rebel Barons, was excommunicated. His lands were confiscated.[1][2]

Geoffrey died without issue on 23 February 1215/6 (1216 in modern reckoning) after being mortally wounded in a tournament in London. He was buried at Trinity Priory within Aldgate.[1][5] The lands he held through his wife reverted to King John.[6] His own lands and the title of Earl of Essex passed to his brother William, though he did not gain possession until he had returned to allegiance to the Crown in 1217.[1][2]

"Geoffrey de Mandeville, another of the east of England rebels, was the son and heir of Geoffrey FitzPeter, earl of Essex, long-serving justiciar to both Richard and John, by his first wife Beatrice, daughter of William de Say and eventual heiress of the Mandeville earls of Essex. By virtue of the family’s ancestral connection Beatrice’s children styled themselves Mandevilles.

"Geoffrey’s first marriage was to Maud, daughter of Robert FitzWalter, another important Essex landowner and the man who was to be effective leader of the baronial rebellion against John. Robert once sprang to the defence of his son-in-law when the latter killed a serving man in a dispute over lodgings at court and John threatened to hang him, declaring ‘By God’s body, you will not hang my son-in-law, you’ll see two hundred lanced knights in your land before you hang him!’ When the king put the case up for trial, FitzWalter appeared in court with two hundred knights.

"Maud (Mandeville) died without issue and was buried in Dunmow priory (Essex). In January 1214 Geoffrey took as his second wife Isabella, third daughter and coheiress of William, earl of Gloucester, and the divorced ex-wife of King John. The match appears to have been forced on Geoffrey unwillingly, and to add to the probable sense of annoyance he felt, he was made to pay for his wife, and to do so heavily. Ever desperate for money, John charged Geoffrey a ruinous fine of 20,000 marks (about £13,666), this to be paid in four instalments each of 5,000 marks, the last to be handed over in Michaelmas 1214, with the proviso that the king might resume Isabella’s lands if the payments were to fall into arrears. The first instalment of the sum was set to be paid before the king set sail to Poitou in February 1214, a date entirely unrealistic, and when Geoffrey failed to meet it, the king ordered the sheriffs to put in hand measures for resumption. By August, however, Geoffrey was evidently beginning to give satisfaction, and John ordered delivery to him of his wife’s honor of Gloucester.

"In the light both of his grievances against John and of his family ties with Robert FitzWalter, it is not surprising to find Geoffrey on the rebel side in 1215. In June he was named to the Twenty Five and, when the barons parcelled out the government of the country in the autumn, he was assigned responsibility for Essex.

"He met his death by accident in a tournament with a French knight in London in February 1216, and was buried in Holy Trinity priory, Aldgate."

As a surety baron, Geoffrey (Mandeville) de Mandeville's profile is managed by the Magna Carta Project, even though he is one of the eight barons with no traced ongoing line of descendants. ~ Noland-165 03:27, 30 January 2018 (EST) 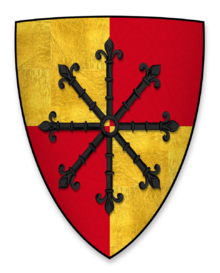 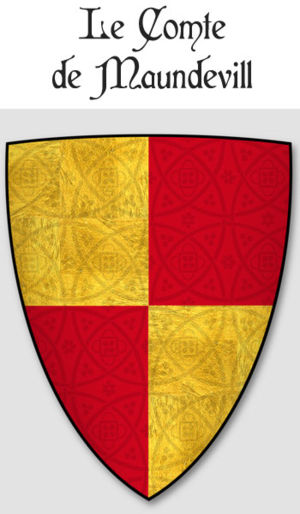 Michael Cayley
I plan to review and revise this profile as part of what I am doing for the Magna Carta Project on Magna Carta Surety Barons. Any questions, please get in touch. Thanks!
posted Mar 28, 2020 by Michael Cayley

Michael Cayley
I have now finished the main work I intend on this profile. If anyone spots any typos or other slips, please either correct them or message me. Thanks.
posted Apr 04, 2020 by Michael Cayley