Édouard Manet (23 January 1832 – 30 April 1883) was a French painter. He was one of the first 19th-century artists to paint modern life, and a pivotal figure in the transition from Realism to Impressionism.

Édouard Manet was born in Paris on 23 January 1832, in the ancestral hôtel particulier (mansion) on the rue Bonaparte[citation needed] to an affluent and well-connected family. His mother, Eugénie-Desirée Fournier, was the daughter of a diplomat and goddaughter of the Swedish crown prince Charles Bernadotte, from whom the Swedish monarchs are descended. His father, Auguste Manet, was a French judge who expected Édouard to pursue a career in law.

After the death of his father in 1862, Manet married Suzanne Leenhoff in 1863[1]. Leenhoff was a Dutch-born piano teacher of Manet's age with whom he had been romantically involved for approximately ten years. In 1852, Leenhoff gave birth, out of wedlock, to a son, Leon Koelin-Leenhoff.

In his forties Manet contracted syphilis, for which he received no treatment. He also suffered from rheumatism. In the years before his death, he developed locomotor ataxia, a known side-effect of syphilis, which caused him considerable pain. In April 1883, his left foot was amputated because of gangrene, and he died eleven days later in Paris[2]. He is buried in the Passy Cemetery in the city.

Is Edouard your ancestor? Please don't go away!

ask our community of genealogists a question.
Sponsored Search by Ancestry.com
DNA
No known carriers of Edouard's ancestors' DNA have taken a DNA test. 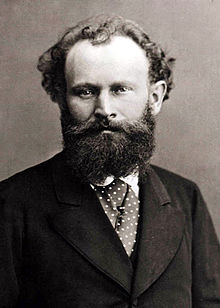 Edouard is 32 degrees from Donald Howard, 21 degrees from Julia Howe and 27 degrees from Henry VIII of England on our single family tree. Login to find your connection.