At the age of 20, Horace enrolled at Brown University. After only 3 years he graduated as valedictorian of his class in 1819. Mann was a tutor of Latin and Greek and served as a librarian at Brown University. He was appointed secretary of the new board of education in Massachusetts in 1837, which started his work that got him in the foremost ranks in American educationists. He founded and edited The Common School Journal which targeted the problems of the public schools. This journal lead to the revolution of the common school system in Massachusetts.

From 1853 to 1859, he served as president of the newly established Antioch College in Yellow Springs Ohio. He also taught political economy, intellectual and moral philosophy, and natural theology.

He died on August 2, 1859 in Yellow Springs Ohio apparently of typhoid.

The father of American public education, Horace Mann said, "Education is our only political safety. Outside of this ark, all is deluge."

He grew up without much money or schooling, and what he did learn, he learned on his own at his local library, which had been founded by Benjamin Franklin. He was accepted into Brown University and graduated in three years, valedictorian of his class.

He was elected to the state legislature in 1827, and 10 years later, when Massachusetts created the first board of education in the country, he was appointed secretary. Up to this point, he hadn't had any particular interest in education, but when he took the post he dedicated himself to it wholeheartedly. He personally inspected every school in the state, gave numerous lectures, and published annual reports advocating the benefits of a common school education for both the student and the state. He spearheaded the Common School Movement, which ensured all children could receive a basic education funded by taxes.

He was elected to the United States Congress in 1848 aftter the death of John Quincy Adams, and in his first speech, he spoke out against slavery. He wrote in a letter later that year: "I think the country is to experience serious times. Interference with slavery will excite civil commotion in the South. But it is best to interfere. Now is the time to see whether the Union is a rope of sand or a band of steel."

When he left politics, he moved to Ohio to accept a position as president of Antioch College. "I beseech you to treasure up in your hearts these my parting words," he told one graduating class: "Be ashamed to die until you have won some victory for humanity."

(19.) Horace Mann LL.D. 6 (Thomas 5, Nathan 4, Thomas 3, Samuel 2, William 1), statesman and educational philosopher, was born in Franklin, Mass., May 4, 1796. He was graduated at Brown University, and commenced the study of law. Elected to the Massachusetts Legislature in 1827. His first speech was in favor of religeous liberty; his second a plea for railways. He was the founder of the State Lunatic Asylum, and an advocate of temperance. He removed to Boston, and about 1836 was President of State Senate. He edited the Revised Statutes of the State, and was for eleven years Secretary of the Board of Education. For many years he devoted his full time to the cause of education, introduced normal schools, paid committees, etc. In 1843 he visited the educational establishments in Europe, and his report was reprinted both in England and America. He was an incessant worker, and conducted a large correspondence. He was elected to Congress in 1848, as successor to John Quincy Adams, and opposed the extension of slavery. At the close of his congressional term he accepted the presidency of Antioch College, at Yellow Springs, Ohio, where he labored successfully until his death, Aug. 2, 1859. For a more particular account, see "Life of Horace Mann," by his widow, Mrs. Mary Mann.+ He married first, Sept. 29, 1830, Charlotte, daughter of President Messer of Brown University. She died without children, Aug. 1, 1832. He married second, Miss Mary T. Peabody (who still survives), May 1, 1843, by whom he had children:

+ "Horace Mann was born in Franklin, Mass., on the 4th of May, 1796. His father, Mr. Thomas Mann, was a farmer; his mother, Miss Stanley, was a woman of good intellect and fine moral sense. Horace Mann's parents had not the means to give him early advantages; but they inspired in him an adoration of learning; and late in life he enjoyed some small opportunities of acquisition, of which he made the most. His naturally logical mind served him in his self-education, and the mere dry bones were but a trifling element in his development. He said of himself in a letter to a friend:

'My teachers were very good people, but they were very poor teachers. Looking back to the school days of my mates and myself, I cannot adopt the line of Virgil, 'O fortunatos nimium sua si bona norint!' [2]

I deny the bona. With the infinite universe all around us, all ready to be daguerreotyped upon our souls, we were never placed at the right focus to receive its glorious images. With all our senses and our faculties glowing and receptive, how little were we taught! or rather how much obstruction was thrust in between us and nature's teachings. Of all our faculties, the memory for words was the only one specially appealed to. All ideas outside of the book were contraband articles, which the teacher confiscated or rather flung overboard.'

These few words are a key to his character and life-work. That others should be put 'at the right focus' was the aim of his life. He studied law at the Litchfield School, and entered upon a great career, but he turned aside from it to devote himself to education; and after remodeling the original common school laws of Massachusetts, he accepted the presidency of Antioch College, where unsectarianism and co-education were the basal principles. His training in the Legislature of his native State, where he held the highest position, gave him a great advantage in training young men for life. A sketch of his uneventful life - uneventful except to himself - may be found in Livingston's Magazine of eminent Americans, which carries him to the period when he left his native state for Ohio. His congressional life is embodied in a volume of his speeches, and his educational essays have been published in two volumes since his death.


Memories: 1
Enter a personal reminiscence or story.
Horace Mann
He became president of Antioch College for 6 years.
posted 30 Oct 2009 by Horace Mann
Login to add a memory.
Is Horace your ancestor? Please don't go away!

ask our community of genealogists a question.
Sponsored Search by Ancestry.com
DNA
No known carriers of Horace's DNA have taken a DNA test. 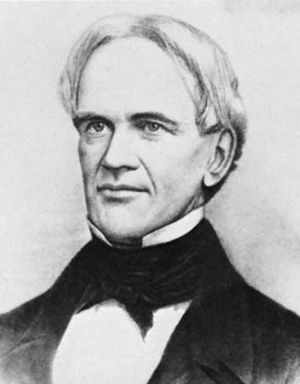 Leave a message for others who see this profile.
There are no comments yet.
Login to post a comment.
Carol Kennedy
reference to Horace Mann in So Car

Description: SUMMER, HENRY, MEMBER OF A SPECIAL COMMITTEE TO PREPARE A PLAN TO DISTRIBUTE THE FREE SCHOOL FUND, DETAILED REPORT TO THE COMMITTEE CONCERNING THE FREE SCHOOL SYSTEM AND NEEDED ALTERATIONS. (26 PAGES)