Mickey Mantle was an American professional baseball player for the New York Yankees, known also as "The Commerce Comet" and "The Mick."[1]

Mickey Charles Mantle was born October 20, 1931 in Spavinaw, Oklahoma, the son of Elvin "Mutt" Mantle and Lovell (Richardson) Mantle. Mickey was named in honor of Hall of Fame baseball catcher, Mickey Cochrane. Mickey's relationship with his father was a good one, with Mickey looking up to both his father and grandfather with respect and warmth.[1]

The Mantle family moved to nearby Commerce, Oklahoma when Mickey was four years old. Mutt worked in the lead and zinc mines there. Mickey was an all-star athlete at Commerce High School, playing baseball, basketball, and football. The University of Oklahoma offered him a football scholarship, playing halfback. Mickey nearly missed out on his baseball career due to his football endeavors, suffering osteomyelitis after being kicked in the shin during a practice game his sophomore year. The after effects of the disease troubled him the rest of his life.[2][1]

Mickey married Merlyn Johnson in Picher, Oklahoma December 23, 1951. They had four sons. Mickey had many extramarital affairs, and even brought his mistress along with Merlyn to his retirement ceremony. Merlyn and Mickey separated in 1980, but never officially divorced.[1]

Mickey played his entire career on the Yankees. He was a center fielder and first baseman from 1951-1968. He was on of the best players and sluggers, and is regarded by many as the greatest switch hitter in baseball history. Mickey in 1968 with 536 home runs, 1,676 runs scored, 1,509 RBI, 1,733 walks and a .298 batting average. He was named to 20 All-Star Games, won a Gold Glove for his play in center field in 1962 and was a part of seven Yankees teams that won the World Series. He hit a record 18 home runs in his 12 appearances in the Fall Classic.[1][2]

Fearing that he would die young, much like other men in his family, Mickey lived a rough life that included alcoholism. He admitted that his drinking negatively affected his playing and his family life. He had his first drink at age 19, and finally checked into the Betty Ford Clinic in 1994 for treatment. In 1995, doctors informed Mickey of the serious damage he had done to his body through drinking, including cirrhosis and hepatitis C, in addition to inoperable liver cancer. He was able to receive a liver transplant in June 1995.[1]

Mickey died August 13, 1995 at Baylor University Medical Center, with Merlyn and his son, David at his bedside. Mickey was interred at the Mantle Family Mausoleum in the St. Matthew section of Sparkman-Hillcrest Memorial Park Cemetery in Dallas, Texas .[1]

Is Mickey your relative? Please don't go away!

ask our community of genealogists a question.
Sponsored Search by Ancestry.com
DNA Connections
It may be possible to confirm family relationships with Mickey by comparing test results with other carriers of his Y-chromosome or his mother's mitochondrial DNA. However, there are no known yDNA or mtDNA test-takers in his direct paternal or maternal line. It is likely that these autosomal DNA test-takers will share some percentage of DNA with Mickey: 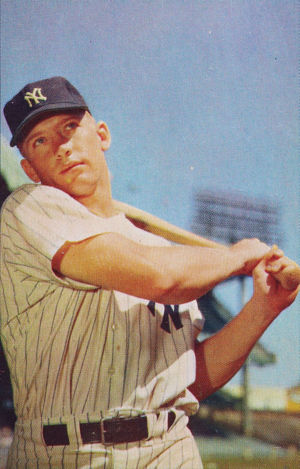 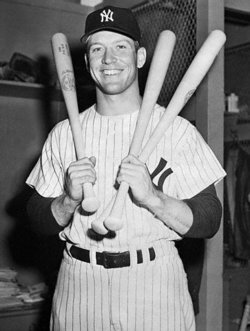