Guglielmo Marconi, 1st Marquis of Marconi, was an Italian inventor and electrical engineer, known for his pioneering work on long-distance radio transmission, the development of Marconi's law, and a radio telegraph system. He is credited as the inventor of the radio, and he shared the 1909 Nobel Prize in Physics with Karl Ferdinand Braun "in recognition of their contributions to the development of wireless telegraphy".

Marconi was born in Bologna, Italy, on April 25, 1874, the second son of an Italian father and an Irish mother.

Marconi was 20 years old when he embarked on a study of works by Heinrich Hertz (1857-1894). He began experimenting on the application of Hertzian waves to the transmission and reception of messages over a distance without wires. In the early summer of 1895, Marconi was first to transmit a signal that was received at a distance of about 2 km, despite a hill in its path.

Marconi registered his new company as the Wireless Telegraph and Signal Company in 1897. In December of 1898, the first wireless equipment manufacturing plant in the world was set up in an old silk factory in Hall Street in Chelmsford near London.

The age of long-distance wireless communication was born on December 12, 1901, as Marconi and his assistants were able to hear the three short bursts of the Morse code 'S' at the receiving station set up in a hospital in Signal Hill, St. John's Newfoundland.

Children of Guglielmo MARCONI and Beatrice O'Brien are:

His contribution to wireless telegraphy earned him the 1909 Nobel Prize in Physics which he shared with Karl Ferdinand Braun, head of the Physics Institute at the University of Strasbourg.

Marconi also pioneered radio broadcasting as a medium of mass communication. In what became Britain's first advertised public broadcast in 1920, a recital by singer Dame Nellie Melba was broadcast internationally by means of a Marconi 15 kW telephone transmitter at the Marconi works in Chelmsford.

Gioia Marconi Braga described Gugliemo as "a quiet, reserved person who recognized a spiritual force outside and above himself. He preferred to trust his own intuition rather than to accept too rigidly the limitations of his own plans which might have been imposed by the science of his day."

Marconi became a member of the Fascist party in 1923.

Guglielmo divorced his first wife in 1927 and married (2) Countess Maria Cristina Bezzi-Scali in 1927 in Italy. Mussolini was the best man at this wedding in 1927.

Children of Guglielmo MARCONI and Countess Maria Cristina Bezzi-Scali are:

Marconi moved to Rome in 1935, never to leave Italy again. He died in the early hours of July 20th, 1937 at the age of 63, and his body was laid to rest in the mausoleum in the grounds of Villa Griffone. In a fitting tribute, wireless stations throughout the world fell silent for 2 minutes and the ether was as silent as it had been before Marconi.

Is Guglielmo your ancestor? Please don't go away!

ask our community of genealogists a question.
Sponsored Search by Ancestry.com
DNA
No known carriers of Guglielmo's DNA have taken a DNA test. 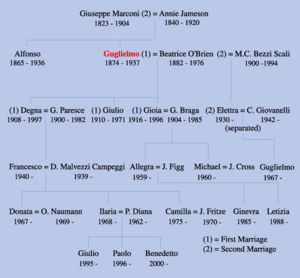