Francis Marion was born in February 1732, the 5th and youngest son of Gabriel Marion Sr. and his wife Esther Cordes. He was the grandson of French Calvinist Protestants, known as Huguenots, who fled their homeland in the late 1600s due to anti-Protestant religious persecution under French King Louis XIV. His parents were maternal first cousins as his 2 grandmothers were sisters: Judith and Esther Baluet. His father's family was from the Poitou-Charentes region of western France while his mother's family were from Mazamet, in the Languedoc region of south-western France. The family spoke French and English and were educated, demonstrating their upper-middle-class background. [1]

Francis was puny child, probably premature - he was said to be "the size of a [red/cooked] lobster" at birth. His knees and ankles were slightly deformed but straightened later.

Initially, Francis Marion wanted to be a sailor and at 15 signed on with a schooner going to the West Indies from Charleston. On their way back, a whale rammed the schooner and sank it. Captain and crew escaped in a boat and drifted for six days. Two men died; the day after, they were rescued by another vessel. Francis returned to his family plantation, his "close call" ending his maritime vocation.

Francis Marion did not give up the idea of adventure, however, and began his military career in 1757, shortly before his 25th birthday. He and his brother Job Marion enrolled in the South Carolina militia under British command and campaigned against the Cherokee in the French and Indian War in the early 1760s.[2]

From June 1775-1782, Francis Marion fought against the British in the American Revolutionary War, as an officer in the Continental Army and the South Carolina Militia. Despite several defeats, allowing the British and their local Tory allies to control most of South Carolina from 1777 to 1782, Colonel (later Brigadier General) Marion and his Continental "irregulars" adopted guerilla tactics, based on their intimate knowledge of South Carolina's lowlands, leading to his nickname of "Swamp Fox," given him by an outwitted British officer, Colonel Banastre Tarleton. He is considered a father of modern guerrilla and maneuver warfare, and is credited in the lineage of the United States Army Rangers and the other American military Special Forces such as the "Green Berets". [3]

Francis Marion was elected to the South Carolina State Assembly in January 1782 in Jacksonborough but he only temporarily left his troops; in June he put down a Tory Loyalist uprising on the Pee Dee River. His plantation was burned but after Great Britain withdrew from the Southern states he returned to Berkeley County to restore it. The 1783 Treaty of Paris ended the American Revolution.

On 20 April 1786, at 54 years old, Francis Marion married his cousin, 46-year-old Mary Esther Videau, b: ca. 1740 who had refused him once before. Given their ages, they had no children together. Marion named great-nephew Francis Marion Dwight his heir on the condition that young Dwight change his surname to Marion (which he did in 1793 by a special act of the South Carolina legislature). Unfortunately, Francis (Dwight) Marion had no sons to carry on his adopted family name. [4]

After the American Revolution, Francis Marion was elected to two terms in the State Senate of South Carolina in 1782 and 1784. He was also a delegate to the South Carolina Constitutional Convention and voted to join the Union. He was also named Commander of Fort Johnson on nearby James Island, which paid him $500 annual salary, enough to allow him to rebuild his Pond Bluff plantation.[5]

Brigadier General Francis Marion passed away on 27 February 1795, the day after his 63rd birthday, at his Berkeley County, South Carolina, plantation. He was buried at the Belle Isle Plantation Cemetery, Saint Stephen's Parish, Berkeley County, South Carolina, USA. [6] His wife survived his passing. Mary Esther (Videau) Marion passed away on 26 July 1815 and was buried next to her husband at the Belle Isle Plantation Cemetery. [7]

Sacred to the memory:of GEN. FRANCIS MARION,
who departed this life on the 27th February 1795
in the sixty-third year of his age
deeply regretted by all his fellow-citizens.
History will record his worth and rising generations
embalm his memory as one of the most distinguished
PATRIOTS AND HEROES OF THE AMERICAN REVOLUTION
which elevated his native country to honor and independence
and secured to her the blessings of liberty and peace.
This tribute of veneration and gratitude is erected in
commemoration of the noble and disinterested virtues
of the citizen and the gallant exploits of the soldier
who lived without fear and died without reproach.

Revolutionary War Continental Brigadier General. In 1753 he joined a militia company to fight in the French and Indian War, but does not see action. During the 1760 Cherokee War he served as a Lieutenant under Captain William Moultrie. In 1773 he established Pond's Bluff Plantation, and was elected to the South Carolina Provincial Congress. Upon the outbreak of hostilities against the British, he was made a Captain in the 2nd South Carolina Regiment. In November 1775 he participates in Snow's campaign against the Tories. Promoted to Major in February 1776, he attempted to fortify the Charleston Harbor, and defended the left side at Fort Sullivan on June 28 of that year. Promoted to Lieutenant Colonel, he assumed command of the 2nd South Carolina regiment on September 23, 1778. A year later he was called upon to fight at the second Battle of Savannah, Georgia. On May 12, 1780 he escaped capture at the fall of Charleston because he fractured his ankle at a party. In July he marched with General Horatio Gates to Camden, South Carolina, where. General Gates ordered Marion to set up a spy ring in Charleston (among his men in this operation are James and Micajah Pickett). After Gates' defeat Francis Marion and his men set up a guerrilla movement to harass and destroy the British, giving rise to the legend of "Swamp Fox". In December of 1780 Governor John Rutledge promoted Francis Marion to Brigadier General. Joining with General Nathaniel Greene, Continental forces slowly pushed General Lord Cornwallis out of the South and consolidated their hold. In 1782 Colonel Thompson led a 700 man force from Charleston and managed to scatter Marion's men, but was subsequently defeated. Francis Marion’s last action in the war was on August 29, 1782 when he ambushed 200 men under Major Thomas Fraser at Fair Lawn, who attempted to reverse the trap and was left with an ammunition wagon. After the war he was elected to the South Carolina State Senate in 1782 and 1784. When the state appointed him commander of Fort Johnson, the salary he earned helped him to rebuild his plantation, which was destroyed during the war. In 1790 he was elected to the Constitutional Convention, in which to serve effectively he had to resign his post at Fort. Johnston. He was elected again in 1791 and voted for the federal union. As taken from Findagrave.com

Sponsored Search by Ancestry.com
DNA Connections
It may be possible to confirm family relationships with Francis by comparing test results with other carriers of his ancestors' Y-chromosome or mitochondrial DNA. However, there are no known yDNA or mtDNA test-takers in his direct paternal or maternal line. It is likely that these autosomal DNA test-takers will share some percentage of DNA with Francis: 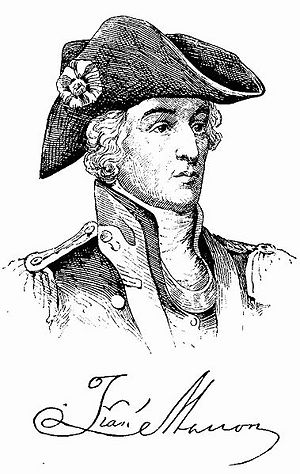 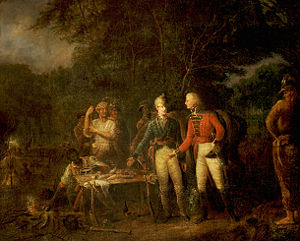 See: Military Heritage, May 2019, Vol 20, No. 6, pgs 8-13, Soldiers column, by Christopher Miskimon. NOTE: This article has some conflicting dates with what is shown in this listing.