According to Sanders the co-heiresses for his barony were 3 daughters from his first marriage and 1 from his second marriage.

Lord of Tamworth. (Tamworth Castle was in Warwickshire at the time he lived and for centuries after.)

Philip Marmyoun was married to Joan, the daughter of Hugh de Kilpek.[2] Phillip Marmion had taken Joan, the younger daughter and coheir of Hugh of Kilpeck, to wife before 4 February, 1244.[3]

Philip and Joan had children:

Philip and Mary had children:

On 7 February, 1244, the king, Henry III of England, had taken the homage of Phillip Marmion, who had taken to wife Joan, the younger daughter and the other heiress of Hugh of Kilpeck, for the rightful share which fell to her of the lands formerly of the aforesaid Hugh her father, and the king committed the share of the aforesaid lands falling to Isabella, the first-born daughter and other heiress of the same Hugh, to W. de Cantilupe to keep until Isabella had come to the king and done what she ought to do for it. The sheriff of Herefordshire was ordered to cause the said land to be partitioned by the oath of trustworthy men, to cause the rightful part falling to Joan to be assigned to Phillip and Joan, his wife, and to cause them to have full seisin thereof, having accepted security from them that they will answer the king for the relief due to the king for this, saving esnecy to the aforementioned Isabella, and to cause him to have full seisin of the share falling to the same.[3]

Philip was sheriff of Warwickshire and Leicestershire in 1249, and of Norfolk and Suffolk in 1261. He served in Poitou in 1254, and was imprisoned when on his way home through France at Pons. He was one of the sureties for the king in December 1263, and fighting for him at Lewes, on 14 May 1264, was taken prisoner there.

In or after 1275, Philip Marmyon (Marmion) petitioned the King, Edward I, to cause Suleye (Bartholomew de Suleye, justice) and Knovill (Bogo de Knovyle, justice) to come before him to explain why they decided against Marmyon in a dispute between him and the people of Tamworth (in both Warwickshire and Staffordshire), which town Henry III, King of England, gave him for life. The petition was endorsed: "The ordinance made thereon at the instance of Philip should stand, saving ..."[5]

Between 1272 and 1291, unspecified religious petitioned a "request as to why, when all pleas of debts and chattels touching testaments and matrimony pertain to Holy Church, Marmion (Philip Marmiun), their parishioner, at the instance of Mortein (William de Mortein), brought his plea of debts and chattels touching matrimony before the barons of the Exchequer." Marmion had to come before the Exchequer and explain.[6]

Philip Marmion petitioned Edward I again, circa February 1290, "for his debts to be attermined, and to be pardoned an amercement."[7]

At Easter in 22 Edward I, 1294, at Staff, Philip's daughter, Joan de Morteyn, sued her sister Matilda and Matilda's husband, Ralph le Botiller, for the next presentation to the church of Northburi (Norbury).[2]

In Staffordshire in 6 Edward II, 1313, Philip's granddaughter, Joan, and her husband, Alexander de Frivill, and his cousin, Ralph le Botiller, the son of Ralph mention in the 1294 case, sued Robert Walter of Northbury, for land in Northbury (Norbury).[4]

A De Banco case was heard at Michaelmas in 8 Richard II, 1385, at Lincoln, in which John Hillary sued Philip's great-grandaughter, Margaret de Ludelowe, formerly the wife of John Dymmok, Kt, for the next presentation to the church of Wilkesby, held of the manor of Scryvelby. The case was dismissed because Sir Henry Hillary, Joan Marmion's second husband, held the manor after Joan's death, by the courtesy of England, having had children with her, and that Scryvelby had been Joan's part of the division of Philip Marmion's lands, but Scryvelby had been settled by Fine on Philip Marmion and Mary, and their heirs of their bodies.[1]

When the case was heard the descendants of Mary's daughter, Joan, from Joan's first husband, Thomas Ludelowe, were:

Sponsored Search by Ancestry.com
DNA
No known carriers of Philip's DNA have taken a DNA test. 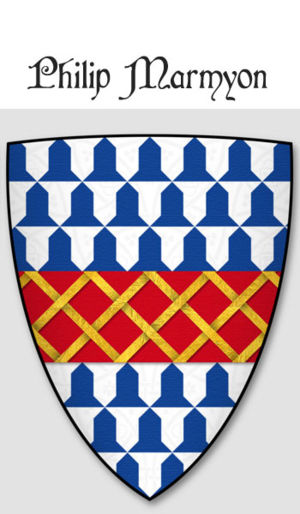 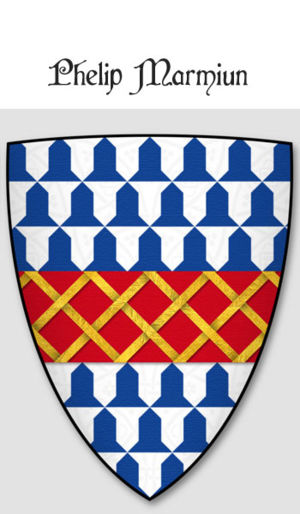 Robin Wood
Well done Gilliam I am happy for that
posted Feb 12, 2019 by Robin Wood

Gillian Thomas
Hi profile managers, the England Project would like to take on management of this profile. See https://www.wikitree.com/wiki/Help:Project_Protecting_and_Merging for more information. I am adding the England project box today and will send you a trusted list request to add me to the trusted list for the profile. Please contact me if you would like to discuss. Regards, Gillian, Leader, England Project.
posted Feb 12, 2019 by Gillian Thomas

Robin Wood
As this profile is protected I leave any alterations to the other more proficient profile owners, I am having some problems sorting data in my mind, Tnanks
posted Feb 12, 2019 by Robin Wood
Harry Kelly
Since Philip was born in 1210 and daughter Joan in 12 84, making him 74 at the time. If these are correct it would be more likely that he would have been her grandfather. I agree with Robin Wood, comment posted 6 Nov. 2017.
posted Feb 12, 2019 by Harry Kelly

Robin Wood
The date of Philips biorth should be ajusted see the following from Soc Med:-

Given that the manor of Thornton presumably came back to Robert Marmion 2, it seems likely that the first husband of Nichole, wife of Geoffrey de Lucy, was either Robert Marmion 2 or one of his sons. I've studied the charter evidence of Robert Marmion 2 presented in Complete Peerage, Vol.8 (sub Marmion) and in the book, The Ancestry of Thomas Bradbury, by John Brooks Threlfall, 2nd edition, 1995, pp. 337-342. These works indicate that Robert Marmion 2 married before 1226 Juliane de Vassy, daughter of Philippe de Vassy [Reference: Société des Antiquaires de Normandie, Vol. 7, pg. 56, No. 96]. Juliane, wife of Robert Marmion, was still living in 1236, when her husband with her consent made a grant to Aunay Abbey [Reference: Société des Antiquaires de Normandie, Vol. 7, pg. 58]. Inasmuch as Robert Marmion was still marriied to Juliane de Vassy in 1236, which is a year after the date Nichole de Lucy was assigned dower in Thornton by Horncastle, it is obvious that Nichole can't have married Robert Marmion 2. However,.in 1233, I note that Robert Marmion 2 made provisions for the marriage of his "son and heir," Philip, he granting custody and the marriage of that son to the Bishop of Winchester for a term of seven years. I believe Philip was a very young child when these arrangements were made in 1233. Although Complete Peerage does not state when this next event occurred, Philip Marmion's marriage was subsequently granted for a term of three years to William de Cauntelop [Reference: Complete Peerage, 8 (1932): 510 (sub Marmion)]. Curia Regis Rolls, Vol. 16, pg. 432 indicates that William de Cauntelo also held Philip Marmion's wardship, but we are not told this fact by Complete Peerage. Philip Marmion was clearly still under age in 1243-4, when his guardian, William de Cauntelo, presented to the church of Coningsby, Lincolnshire [Reference: Grosseteste, Rotuli Roberti Grosseteste Episcopi Lincolniensis (Lincoln Rec. Soc. 11) (1914): 67]. Philip's age can probably be determined even more exactly, as I noticed that William de Cauntelo also presented to the churches of Haltham on Bain and Roughton in this same time period, both of which he would have held in right of his wardship of Philip Marmion. Philip Marmion eventually grew to adulthood and married Joan de Kilpeck, younger daughter of Hugh de Kilpeck. More than likely Philip Marmion came of age in 1249 when charters of free warren granted to an ancestor were confirmed to him. If so, this would suggest that Philip Marmion was born about 1228, and certainly no earlier than 1223. This would make him 10 years old or less when his father granted his marriage to the Bishop of Winchester.