Johannes was the son of Ahasuerus Marselis and Sara Taakels Heemstraat, baptized in the Reformed Dutch Church of Albany, New York, on 26 January 1701.[1] He was his parents' second child to be baptized with the name Johannes. The earlier Johannes was baptized on 26 June 1698 and is assumed to have died.

He was a merchant, and owned the house and lot No. 23 Front street in Schenectady.[2]

He must have died before 1753, for his widow then occupied his Schenectady property. [2]

Waiting to hear about verification from the Cemetery on the Findagrave info. They were asked if they had a birth date as well. - Tanya Lowry, 25 May 2020.

Is Johannes your ancestor? Please don't go away!

ask our community of genealogists a question.
Sponsored Search by Ancestry.com
DNA Connections
It may be possible to confirm family relationships with Johannes by comparing test results with other carriers of his Y-chromosome or his mother's mitochondrial DNA. However, there are no known yDNA or mtDNA test-takers in his direct paternal or maternal line. It is likely that these autosomal DNA test-takers will share DNA with Johannes: 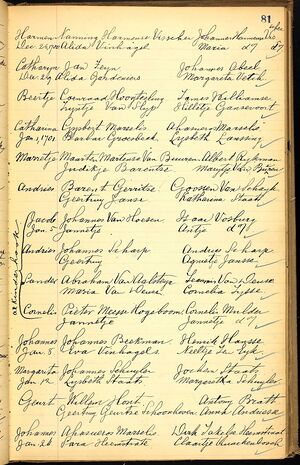 Ellen Smith
It is pretty clear to me that the Johannes baptized in 1698 died young, a brother was baptized as Johannes in 1701, and there never was a Johanna. The profile for the child born in 1701 was created by a GEDCOM import in 2012 from an Ancestry Family Tree at https://www.ancestry.com/family-tree/person/tree/32905041/person/19649902978/facts that is unsourced and that also has a Johannes born in 1701. [Citations to unsourced Ancestry Trees may not be a valid basis for genealogy, but they can be very helpful for understanding what a contributor intended. This is one of the reasons I restored that citation earlier today.] The Albany baptism records show baptisms of two children name Johannes, and the authors of various secondary sources (including, for example, the Talcott book that has been cited here and the excellent notes about this family that Pat Wardell made and that are available for download at Space: Early Bergen County Families).

In spite of the numerous versions of the records cited in discussion here, we do not have electronic images of the Albany baptism register and there is really only one transcript for the Albany baptism records. The Holland Society of New York made transcriptions of the record book (someone who copied the records into notebooks) that were typeset and published in the Holland Society Year Books starting in 1904. The images of handwritten records that we can access on Ancestry.com are images of the notebooks where the Holland Society hand-copied the baptism register; these are not actual church records. And we should not have to fret over the handwriting in those notebooks, since we have easy-to-read typeset versions of the content from those notebooks, created by someone who could consult with the person who hand-copied the records. like to use the versions of the Albany records at https://mathcs.clarku.edu/~djoyce/gen/albany/ because I have found them to be accurate replicas, but today I found an OCR record in one of the records for Johannes. The Albany church records in the Family Search records index were created by extracting information from the Holland Society Year Books, and they are less accurate. And if Albany records appear in online databases from the Netherlands, those database entries also are derived from the Holland Society Year Books (contrary to what some folks seem to assume, the Dutch do not have their own superior set of records). In my opinion, we should treat the printed Year Books of the Holland Society (which are readily available online, for free) as the single best source for these records -- we should not be compiling collections of citations to FamilySearch, ancestralcurios, wiewaswie, etc., and when we have the printed transcript we do not need the Ancestry.com images of the notebooks.

I see little benefit in looking for a death record for a child who died young. We have very few death or burial records for anybody in New Netherland, even for adults. Instead, death dates are typically inferred from wills, deeds, probate records, the dates when a person was recorded as alive or as deceased, and for children the date when another child of the same name arrived. And if a death record or tombstone exists for Johannes, there is only tiny chance that it includes a birth date.

The easiest way to resolve this mess is to swap the birth dates on the two Johannes profiles. I will tackle that.

Tanya Lowry
Not meaning to be a p.i.t.a Ellen...well maybe a little...lol...then who is the Johanna Marselis who married a Van Vorst????
posted May 26, 2020 by Tanya Lowry

Ellen Smith
I cannot say who the Johanna Marselis who married a Van Vorst was, but I do see that Pat Wardell has her on a list of Unplaced MerselisWomen:

As you know, it is common to find people whose life events were not recorded. If there are records for the Johannes Van Vorst and wife Johanna, they may give clues to which Marselis family she came from.

Ellen Smith
We often can discern parents from baptism records for the children, deeds, etc. Pat Wardell seems to have been a clever genealogist, so if she failed to figure out who Johanna was, it is likely that there are no clues out there.

One thing I have been wondering about is where the name Johannes (or Johanna) came from in this family. Marcelis Janse was the son of man by that name, but it is not common to name the first son after a great-grandfather. (I suppose it would make sense if Marselis truly was the family name of Marselis Jans, and Jan truly was his first name...)

Tanya Lowry
Thanks Ellen, I will do some reading. To see if I can discover who she was.
posted May 27, 2020 by Tanya Lowry

John Miller Jr.
The online directory of the cemetery cited on Findagrave does not list Johannes (or Johanna) Marselis (or the usual variants).

The published version of the 1701 transcript -- supporting Johannes -- is in the Holland Society Year Book, 1905.

John Miller Jr.
I'm pretty sure there is little likelihood of finding death or burial records that also state birth date. I have not seen any death records for the Albany church in any of the online sources, or the published Holland Society records.

I have posted a link to the printed version of the 1701 transcript, which confirms the reading of Johannes.

Ellen Smith
Tanya, Please do not delete comments that are part of an active ongoing conversation and that someone else has replied to. That seems inconsiderate and it can hinder effective communication.
posted May 27, 2020 by Ellen Smith

John Miller Jr.
She deleted her comment and I presume automatically my reply to it, both of which were superseded by your resolution, so I certainly don't object to the deletion.
posted May 27, 2020 by John Miller Jr.

Ellen Smith
John: I can no longer see Tanya's comment (it is gone forever), but I still see your reply. Because I have had to try to reconstruct other members discussions' on occasion (when conflicts have arisen), it makes me very nervous when I see that comments have been deleted after someone made a substantive reply.

It is now possible to archive old comments, which hides them without obliterating them. In this sort of situation and in the context of a Wiki (where we are all supposed to be cooperating and all changes are supposed to be preserved), archiving is far better than deletion.

BTW I wonder if you can help me with something. I'm trying to get a couple of people entered as children in protected profiles. I have posted requests in the comments which I thought was the right way to do it. But I'm not getting any response (one posted just yesterday but another is several days old).

One is Abram Speer as child of Hans Spier and Tryntje (Mabie) Spier.

Can you help? Thanks.

Tanya Lowry
I defer to the project's POV. I suggest we wait for the word of Ellen Smith and/or the New Netherland Settler Project then this will not end up messed up.
posted May 26, 2020 by Tanya Lowry

Richard Bensen
I bow to your more extensive research, and will concur when you are all in agreement. Marselis-56 seems to be a first cousin of Marselis-151, yes? Please sort me out, and thanks for all your good work!
posted May 26, 2020 by Richard Bensen

Tanya Lowry
Please remember to attach the images to the correct profiles after the "fix"...Thanks Ellen!
posted May 26, 2020 by Tanya Lowry

John Miller Jr.
I think the best way to solve this is to switch the birth info between the two profiles, leaving this one for the surviving Johannes. Change birth and name for "Johanna".

Any concerns with that?

Tanya Lowry
Yes. I have concerns. Please wait until more info is processed. Thanks.
posted May 25, 2020 by Tanya Lowry

Tanya Lowry
I am starting to see that makes sense. However, do we have the death records for either?? I have only found what i put in the research notes section. That Johannes was buried in 1746 by a Mr. Brat.
posted May 26, 2020 by Tanya Lowry

Ellen Smith
Yes, many people's remains were reinterred in the Albany Rural Cemetery. That's well-documented, but it doesn't mean that the FindAGrave page that has no gravestone image or other source is based on actual evidence that this man died in 1746 and was reinterred there.

As for the burial cards on Ancestry, people need to understand that the user-contributed family trees that cause us so much trouble are just one part of Ancestry. Ancestry has huge collections of images of records -- records that in many cases aren't available on free sites. Their huge collection of Albany Rural Cemetery burial cards is one such collection. The records appear to have been (1) acquired from the Cemetery, (2) scanned, and (3) indexed for searching. Excerpt from Ancestry's Source Description: "Many burial records for the Albany Rural Cemetery predate its 1841 founding because some record re-interments from an earlier municipal cemetery that had problems with flooding. Some cards also provide birth and other family information as well as death details."

Tanya Lowry
https://albanychurchgrounds.wordpress.com/2012/02/07/the-oldest-stones/ its only a matter of discovery now. Someone was kind enough to direct me to this wordpress blog. Ancestry is not fool proof that aside...people do care as is blatant in the word press articles. More later...
posted Feb 11, 2019 by Tanya Lowry

Ellen Smith
If Johannes is in the Albany Rural Cemetery, it would be because his remains were moved there long after his death. The cemetery wasn't established until the mid-19th century.

Ancestry.com has images of burial cards (i.e. cemetery records) for Albany Rural Cemetery. I searched, but didn't find this man recorded there.

Ellen Smith
Marselis-116 and Marselis-56 appear to represent the same person because: Same person. He was Johannes.
posted Oct 16, 2018 by Ellen Smith