William Marshal was a member of aristocracy in the British Isles.

William was the son of John Marshal and Sybil, daughter of Walter de Salisbury.[1][2] He was probably born in late 1146 or early 1147.[1][2] His birthplace is unknown - see the Research Notes.

In 1152, during the siege of Newbury, Berkshire, his father handed him over to King Stephen as a hostage. His father broke the terms of his agreement with Stephen, who expected the surrender of Newbury Castle, but William's life was spared.[1] King Stephen is said to have played in his tent with William[2] instead of, as threatened, catapulting William over the battlements into Newbury Castle.[3] The story goes that William's father, threatened with the death of his hostage son, responded that he had the anvils and hammers to make a finer one.[1]

Subsequently, William was a squire of William de Tancarville, Master Chamberlain of Normandy, for eight years.[1][2] He was a younger son, and had to a great extent to make his own way initially, which he did as a warrior and participant in tournaments.[1][4] He was probably knighted in 1166 and was almost immediately involved in a frontier war.[1]

In 1168 he went with his uncle Patrick, Earl of Salisbury to Poitou, where Patrick was killed and William was captured by the forces of Guy de Lusignan. He was ransomed by Eleanor of Aquitaine and returned to England.[1][2] Eleanor made him a member of her household.[5]

In 1170 William Marshal went on to join the household of Henry the Young King[1][2] whom he trained in arms and chivalry.[1][6] In 1173 he supported the Young King in his rebellion. In 1174 he was a witness to the subsequent agreement between Henry II and his children.[1][2]

William's relationship with the Young King and the rewards from his participation in tournaments gave him financial independence and the resources to maintain a household of knights.[1]

The Young King had made a vow to go on crusade, but died in 1183. On his deathbed, he asked William to crusade in his place. This William did[2], after escorting the remains of Henry the Young King to Rouen.[1]

William was back in Normandy, possibly by the spring of 1186, and became a member of Henry II's household.[1] He took part in the fighting in the next two years against the future King Richard I.[2] In Henry II's last months he was a commander of the king's household guard, was in command of the rearguard when Henry II escaped from Le Mans to Angers in 1189. The story goes that in rearguard action against the future Richard I, he had Richard at his mercy and spared his life, killing his horse instead.[1] He attended Henry II's deathbed at Chinon and escorted the king's corpse to Fontevraud.[2]

William Marshal retained royal favour on the accession of Richard I, who gave him as wife Isabel de Clare.[2] Their marriage took place in July or August 1189.[1] in London[2] where she lived in the Tower (for her protection against abduction and a forced marriage). The marriage made him a very wealthy lord, with lands and claims to lands in England, Wales, Ireland and Normandy.[1][4] Through his wife he assumed the title Earl of Strigoil.[2]

William and Isabel had ten children - five sons and five daughters - who lived to adulthood, but none of his sons had any legitimate heirs.

At Richard I's coronation on 3 September 1189, William carried the gold sceptre and cross, and indication of the favour in which he was held.[1][2] Soon after he was made a justiciar under William de Longchamp, Chief Justiciar of England.[2] When Walter de Coutances, Archbishop of Rouen became Chief Justiciar in the autumn of 1191, William was his main assistant.[1][2]

In 1189 he was granted Pembroke Castle, which he began to turn from an edifice of wood and earth into a stone fortification.[12]

In about 1190 he added considerably to his estates by acquiring a moiety of the lands of Walter Giffard, former Earl of Buckingham, thereby becoming Lord of Longueville.[1][2]

In 1193 the future King John rebelled against his brother: William Marshal stayed loyal to the king and captured Windsor Castle[1][2] but declined to do homage to Richard I for his Irish lands, saying the homage was owed to John.[1] That year he was made Sheriff of Sussex.[13]

In March 1193/4 he inherited the title of Marshal of England from his brother John[2], who was killed fighting on the side of the future King John against forces loyal to Richard I.[4]

King John's loss of Normandy threatened William's possession of his estates there. John sought to give him some compensation with lands in England, but William entered into negotiations with Philippe-Auguste, leading to his paying the French king homage for his Normandy possessions in 1205. This led to his falling temporarily into John's displeasure, exacerbated when William Marshal refused to join in a planned expedition to Poitou.[1] At one point King John sought to have him arraigned for treason, but other peers refused.[1] John also tried to get one of his household knights to challenge William Marshal, but nobody was willing to do so.[1]

Between 1207 and 1213 William was mainly in Ireland, effectively in exile.[2] King John deprived him of some of his offices, and some of William's supporters abandoned him.[1] William sought to build bridges with John in 1212, when he clearly sided with the king at a time of threatened baronial conspiracy.[1] In 1213 William was summoned back to England, where lands that had been confiscated were returned to him and he was given additional lordships.[1] He was a witness to King John's act of submission to the Pope.[2] The king entrusted him with castles in Wales and Ireland.[2]

In 1215 William Marshal was one of the Illustrious Men listed as King John's counsellors in the Magna Carta.[2][16][17] He stayed loyal to the king and when civil war broke out, he secured the Welsh Marches.[1] He oversaw King John's funeral at Worcester[1] and was one of his executors.[1][2]

William was present for the third time at a coronation when Henry III was crowned in 1216.[2] In November that year he was chosen as Regent, a position he held until his death.[1][2]

The next year, at the age of about 70, he commanded the royal forces in their victory over rebels and the French in the Battle of Lincoln, taking an active part in the fighting.[1][2] In September 1217 he concluded a peace treaty with the French.[1][2] An agreement with Llywelyn of Gwynedd followed in March 1218.[1]

His son William commissioned an adulatory verse biography of him - L'Histoire de Guillaume le Maréchal - soon after his death.[19]

It is doubtful that William was born at Pembroke, which he obtained through his wife's inheritance later in his life, not from William's father. It is doubtful he was born in France, while his father was fighting Earl Patrick and King Stephen for his castles in England. It is likely he was born in England, but it is not stated in a known record.

What was a 'Marshal'?

"Marshal" originally referred to a function of "horse servant", which is what the word meant in the old language of the Franks. By William's lifetime, the work of the king's Marshal had grown far away from its original tasks. There were thus many marshals, but William's family held the highest marshalcy in the royal household. The office became hereditary in the time of William's father.[20][21]

Duties of the Master Marshall "involved the keeping of certain royal records" and the management of "four other lesser marshals, both clerks and knights, assistants called sergeants, the knight ushers and common ushers of the royal hall, the usher of the king's chamber, the watchmen of court, the tent-keeper and the keeper of the king's hearth".[22][23]

Even before he inherited the office William was apparently referred to as "the Marshal" (li Mareschal in the French of the time). By the time William died, all of Europe referred to him this way, and he had given the position a new status, leading in later generations to the peerage title of "Earl Marshall", something William had sometimes been called (comes mareschallus in Latin).[20][14][24] 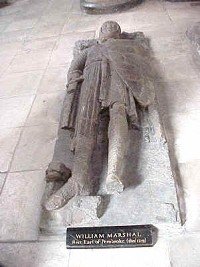 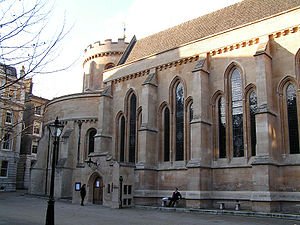 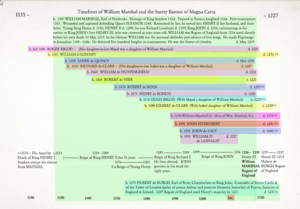 Michael Cayley
I have finished the work I intend at this stage on this profile. There are likely to be some typos etc I have missed: if anyone spots them, please correct them
posted Oct 01, 2019 by Michael Cayley

Michael Cayley
I plan to work on this profile as part of what I do for the Magna Carta Project on Illustrious Men and on 5-star profiles.
posted Sep 17, 2019 by Michael Cayley

If this isn't already in his Sources, it should be.

This makes Richard's father Gilbert the 1st Earl of Pembroke, Richard the 2nd, Gilbert the 3rd & Isabel's husband William Marshal the 4th. So I'm not sure where 5th comes from for this profile.

Liz (Noland) Shifflett
Richardsons Magna Carta Ancestry (MCA) lists son William as "William Marshal the Younger (later Earl of Pembroke)". . . omitting a number. But this William is shown in MCA as "William Marshal, Knt., 4th Earl of Pembroke (or Striguil), heredity Master Marshal" (from p 413, as father of Sibyl - in the entries for daughters Maud & Isabel, it's spelled "Strigoil" & the additional info of their mother is given: "Isabel, daughter of Richard Fitz Gilbert (nicknamed "Strongbow"), 2nd Earl of Pembroke (or Strigoil).")

Any objections to making that change?? Douglas Richardson apparently refers to him as Earl of Pembroke without a number.

Andrew Lancaster
Marshal-4 and De Marshall of Pembroke and Striguil-1 appear to represent the same person because: Clearly intended to be the same person, as discussed on G2G. The one with the long name looks like a way of keeping someone's favorite theory going.
posted Sep 26, 2015 by Andrew Lancaster

Andrew Lancaster
I'd saying using the word despised concerning King John is stronger than a broad look at the sources allows. Crouch points out that his family will not have wanted to emphasize how close they were.
posted Sep 23, 2015 by Andrew Lancaster

Andrew Lancaster
Perhaps a source worth adding (very useful and practical): http://www.medievalgenealogy.org.uk/families/marshal/williammarshal.shtml From what I have read there are doubts about the grandfather we are giving.
posted Sep 23, 2015 by Andrew Lancaster

William is 24 degrees from Laurie Giffin, 37 degrees from Toni Morrison and 11 degrees from Henry VIII of England on our single family tree. Login to find your connection.