Father of St. Thérèse of the Child Jesus and the Holy Face. Canonized, together with his wife, on October 18, 2015.

Louis was born on August 22, 1823, at 3, rue Servandoni, Bordeaux, France. His parents were Pierre Martin and Fanie Boureau Louis was baptised at the Church of St. Eulalie, Bordeaux on October 28th 1823. His (translated) baptismal certificate reads: In the year 1823, on the twenty-eighth of October, Louis Joseph Aloys Stanislaus Martin, born on the twenty-third of the month of August last, lawful son of Pierre Franҫois Martin, Captain in the 19th Light Infantry, and of Marie Anne Fannie Boureau, his wife; residing at No. 3 rue Servandoni, was baptised by me, the undersigned priest. As godfather he had Léonce de Lamothe and as godmother, Ernestine Beyssac. Signed. Jean Antoine Martegoute. (by licience of the Parish Priest)

When Louis was born his father was away fighting in Spain for the French Army but he returned in November and was soon moved to Avignon. The next move took place in 1828 when Captain Martin was appointed to the military staff at Strasbourg. He was town adjutant. Louis attended the school established for children of the French Army who were known as Enfants de Troupe. Louis enjoyed living in Strasbourg where he was fascinated by the large clock on the Cathedral. When Louis’ father retired from the army at the end of 1830 he took his family back to his native Normandy and chose to live in Alençon where Louis attended a school run by the Institute of the Brothers of the Christian Schools.

When Louis was 19 he went to live with his father's cousin, Louis Bohard, at Rennes. He was a watchmaker, and as Louis took great interest in his work and expresssed a desire to learn the trade, Louis Bohard agreed to teach him. While he was living in Rennes Louis developed a great love of Brittany and even learned the Breton language, sang Breton songs and sometimes wore the Breton national costume. When he had been in Rennes just over a year Louis set out for Strasbourg, where he had lived as a child. He arrived in September 1843 to continue his apprenticeship with a friend of his father, Amié Mathey, who was a master watchmaker. On his way to Strasbourg Louis spent about ten days in the Swiss Alps and during that time he visited the Great St. Bernard Monastery. In his free time in the border town of Strasbourg, where both French and German were spoken, Louis learned German. In September 1845 he left Strasbourg and made his way back to the Great St. Bernard Monastery with the intention of joining the community there. They were Canons Regular of St. Augustine who as well as celebrating Mass and the Divine Office, gave hospitality to travellers and pilgrims. They also rescued stranded travellers with the help of their famous St. Bernard dogs. When the Prior discovered that Louis had no knowledge of Latin he refused to receive him, but suggested that he return home and study Latin. Louis did as he suggested, but after a spell of illness decided to complete his apprenticeship in Paris. He returned to Alençon, as a master watchmaker in 1850 and set up his shop on rue du Pont Neuf, taking his parents to live with him.

On July 13, 1858 at midnight, Louis married Zélie Guérin at Our Lady’s Church in Alenςon, having gone through the civil ceremony at the Town Hall two hours earlier. They had nine children three of whom died in infancy and another at the age of five. After Zélie died Louis moved to Les Buissonnets in Lisieux with his five daughters ranging in age from 4-17. He had a unique relationship with each of them but was always especially close to his eldest daughter, Marie. All five daughters became Religious, but Céline stayed at home to care for her father and entered the Carmel of Lisieux about six weeks after his death. Louis suffered from cerebral arteriosclerosis which had physical and mental symptoms and for his own safety he spent 3 years in the Bon Sauveur Hospital in Caen. When he lost the use of his legs and it was safe to return home to Lisieux. He spent a lot of time with the Guérin Family with whom his daughters Léonie and Céline were living at the time, as the lease on Les Buissonnets had expired. The three Martins later moved into a house on rue L'Abbaye, just opposite the Guérin's back entrance, but after Léonie entered the Visitation Monastery and Louis' health became worse, he and Céline moved back to live with the Guérins. Louis died in their country property, La Musse, in the district of Arnières-sur-Iton, Eure near Evereux on Sunday July 29, 1894. He was taken back to Lisieux for burial in the new family grave in the municipal cemetery.

Ann Connors Hess, editor, A Call to A Deeper Love - The Family Correspondence of the Parents of St. Thérèse of the Child Jesus. New York, St. Pauls/Alba House (2011)

Story of a Family by Fr. Stephane-Joseph Piat M.H. Gill & Sons, Dublin 1847 (This is the translation of a French book written using the first hand recollections of Celine Martin) 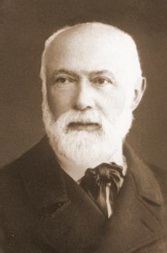 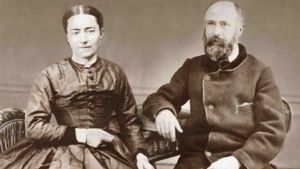 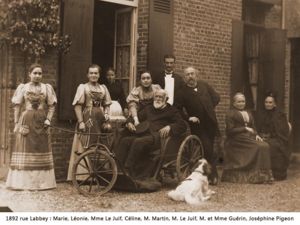 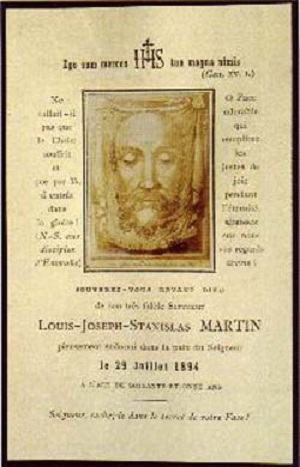 Fireplace at Les Buissonnets, Home of the Martin Family from November 1877 until December 1889 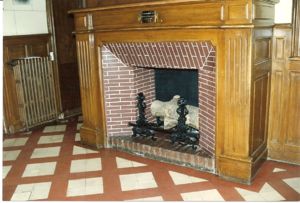