Joseph Martin aka Bernabé, Barnabe
Born about 1738 in Beaubassin, Acadia

Joseph Martin dit Barnarbe is on the Wall of Names at the Acadian Memorial in St. Martinville, Louisiana Plaque 5 Left. Listed with him is his wife Marguerite Pitre . [1]

Note: the cited publication has only a list as they appeared in the original Archive General de Indias-Santo Domingo, 2595, 181-182, but no other family members. Also on the militia list is his father Ambroise Bernabé and brother Paul Bernabé.
with 1 woman [his wife] & 1 child [a boy, son Joseph?].[5] 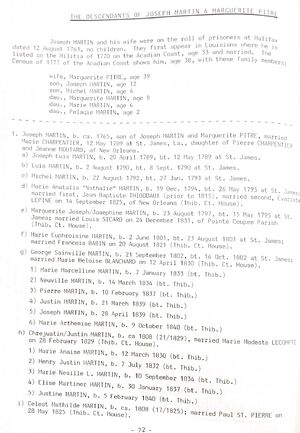