Karl Marx, (Trier 5 May 1818, evgl. get. 26 Aug 1824, - London 14 Mar1883), working in collaboration with Friedrich Engels, was the famous founder of the revolutionary political philosophy of Marxist Communism.

His parents were Heinrich "Herschel" Marx and Henrietta Pressburg (1788-1863). Marx was ancestrally Jewish, his maternal grandfather was a Dutch rabbi, and his paternal line had been rabbis in Trier since 1723. They lived a wealthy and middle-class existence, with Herschel's family owning a number of Moselle vineyards. Herschel had converted from Judaism to Prussia's predominant Lutheranism, and so became called Heinrich. In 1815 Heinrich Marx began work as an attorney. [1]

Heinrich's wife Henrietta was a semi-literate Dutch Jewish woman, although from a prosperous business family that later founded the company Philips Electronics: she was great-aunt to Anton and Gerard Philips, and great-great-aunt to Frits Philips. Her nephew, and Karl's first cousin, Benjamin Philips (1830–1900), was a wealthy banker and industrialist, upon whom Karl and Jenny Marx would later often come to rely for loans while they were exiled in London. In contrast to her husband, Henrietta retained her Jewish faith.[1]

Karl Marx was born on 5 May 1818 at 664 Brückergasse in Trier, a town then part of the Kingdom of Prussia's Province of the Lower Rhine. [1] That town and region was folded into West Germany[2] after World War II, and since the 1990s has been part of the consolidated Republic of Germany. Karl was the third of nine children, and he became the oldest surviving son when his brother Moritz died in 1819.[1]

in 1819 Heinrich moved his family to a ten-room property near the Porta Nigra. Young Karl was baptised into the Lutheran Church in August 1824, but later in life he became a known atheist, a belief which also figured prominently in his system of political philosophy. His surviving siblings, Sophie, Hermann, Henriette, Louise, Emilie and Karoline, were also baptised as Lutherans. Prior to high school, young Karl was privately educated, by his father Heinrich Marx.[1]

In 1836 he transferred to the University of Berlin, faculty of law. While there in Berlin through 1838 he studied law, philosphy, history, and English and Italian languages.[2]

As a teenager, Marx had fallen in love with Jenny von Westphalen, a young woman several years his senior, from his home town of Trier. Soon after becoming a student in Berlin, Marx wrote a letter home to his father, on November 10, 1837, in which he describes his feelings for Jenny, and the beginnings of his turmoil over Hegelian phiosophy, which he was then studying:.[2]

"All the poems of the first three volumes I sent to Jenny are marked by attacks on our times, diffuse and inchoate expressions of feeling, nothing natural, everything built of moonshine, complete opposisition between what is and what ought to be, rhetorical reflections instead of poetic thoughts, but perhaps also a certain warmth of feeling and striving for poetic fire."

"Owning to being upset over Jenny's illness and my vain, fruitless intellectual labours, and as the result of nagging annoyance at having had to make an idol of a veiw that I hated, I became Ill, as I have already written to you, dear Father. When I got better I burnt all the poems and outlines of stories, etc., imagining that I could give them up completely, of which so far at any rate I have not given any proofs to the contrary."

"Please give greetings from me to my sweet, wonderful Jenny. I have read her letter twelve times already, and always discover new delights in it. It is in every respect, including that of style, the most beautiful letter I can imagine being written by a woman."

Between 1839 and 1841 Marx studied Greek philosophy and wrote his doctoral dissertation, The Difference Between the Democritean and Epicurean Philosphies of Nature.[2]

His plan to become a teacher at Bonn failed, and so through 1842 Marx instead began to write articles for the Young Hegelian radicals' paper, Deutsche Jahrbücher, and also for an opposition newspaper in Cologne, the Rheinische Zeitung.[2]

In October 1842 Marx became the editor of the Rheinische Zeitung, and so he then moved to Cologne.[2]

In November 1842 at Cologne Marx first met his future collaborator Friedrich Engels, who had also been writing articles for the Rheinische Zeitung. In that meeting, Engels had stopped by the paper's office there on his way to England, where he would remain for the next couple years.[2]

The Prussian government then imposed strict censorship on the Rheinische Zeitung, and so on March 17, 1843 Marx resigned as editor.[2]

On June 19, 1843 Marx married his long-term love Jenny von Westphalen in a Protestant church in Kreuznach.[1] In November he became an expatriate when he moved to Paris, France. He continued to write and edit for Jahrbücher in Paris, and included articles that he received from Engels in England.[2]

In April 1844 the Prussian government accused Marx of high treason, with an arrest order if he crossed the border.[2]

In January 1845 the Prussian government pressured France to banish Marx from Paris, and so Marx moved to Brussels, Belgium, where he was again joined by Engels in April. That summer, through August, they both traveled to Manchester, England to study working and living conditions there. That year the Prussian government forced Marx to renounces his Prussian citizenship.[2]

In February 1848 Marx and Engels wrote their most famous work, the Communist Manifesto, published in London, England.[2]

In the fall of 1849 Marx and his family settled in London. The next year he resumed studies in the British Museum. [2]

In 1850 Engels settled in Manchester, where he began a twenty year career in the firm of Ermen and Engels, through which he helped support Marx over the next period of his life.[2]

Is Karl your ancestor? Please don't go away!

ask our community of genealogists a question.
Sponsored Search by Ancestry.com
DNA
No known carriers of Karl's DNA have taken a DNA test. 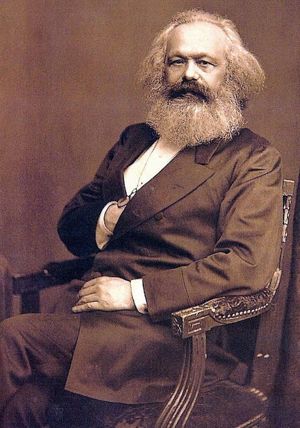 The Germany Project would like to co-manage this profile with you. You are welcome to stay on as either a PM or on the Trusted List. Would you please add [email address removed] to the trusted list, and then set the Germany Project as a manager. If I don't hear back from you in a week, I'll adopt the profile for the Germany project, leaving all profile managers and trusted list members as they are, Any questions, please let me know.

Chris Whitten
I went ahead and did the basic merge. Thanks, Maggie and Sir William.
posted Jun 25, 2014 by Chris Whitten

Maggie N.
Ed, could you please do this merge for the Global Family reunion project ? I will clean it up for you (-: