American comedian and film and television star. He made 13 feature films with his 4 siblings, the Marx Brothers, of whom he was the third-born.

He was born on October 2, 1890, in New York City, New York, in a room above a butcher's shop on 78th Street in New York City. The Marx children grew up on East 93rd Street off Lexington Avenue in a neighborhood now known as Carnegie Hill on the Upper East Side of the borough of Manhattan, in New York City. Marx's family was Jewish. Groucho's mother was Miene "Minnie" Schoenberg, whose family came from Dornum in northern Germany when she was 16 years old. His father was Simon "Sam" Marx, who changed his name from Marrix, and was called "Frenchie" throughout his life because he and his family came from France. Minnie's brother was Al Schoenberg, who shortened his name to Al Shean when he went into show business as half of Gallagher and Shean, a noted vaudeville act of the early 20th century.

Groucho's three marriages all ended in divorce. His first wife was chorus girl Ruth Johnson (m. 1920–42);. He was 29 and she 19 at the time of their wedding. The couple had two children, Arthur Marx and Miriam Marx. His second wife was Kay Marvis (m. 1945–51), née Catherine Dittig, former wife of Leo Gorcey. Groucho was 54 and Kay 21 at the time of their marriage. They had a daughter, Melinda Marx. His third wife was actress Eden Hartford (m. 1954–69). She was 24 when she married the 63-year-old Groucho.

Marx was hospitalized for pneumonia on June 22, 1977 and died on August 19, 1977 at Cedars Sinai Medical Center in Los Angeles, at age 86. Marx was interred in the Eden Memorial Park Cemetery in Los Angeles.

Sponsored Search by Ancestry.com
DNA
No known carriers of Groucho's DNA have taken a DNA test. 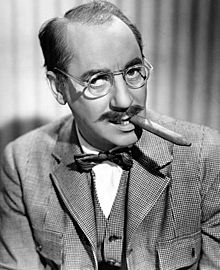 Groucho is 23 degrees from Jaki Erdoes, 17 degrees from Wallis Windsor and 19 degrees from Henry VIII of England on our single family tree. Login to find your connection.