Quick summary: Esther might or might not have been born Mat(t)hews, a different Esther who apparently WAS Matthews married Daniel Willard in Yarmouth in 1695.

The main legitimate source for Esther the wife of William Hall is Anderson's "Great Migration" which unfortunately is self-contradictory regarding her marriage so this profile should be very much considered work-in-progress.

In Great Migration Vol 5 pg. 93 in the entry for James Matthews, his daughter Esther is given a specific birth date and location (8 Jan 1650/51 in Yarmouth, Massachusetts) as the daughter of James Matthews. This entry says she was "probably the woman of that name who married Daniel Willard in Yarmouth 10 Aug 1695" listing Plymouth Colony Records and Yarmouth Vital Records as primary sources.[1] and [2] and for an actual primary source showing maiden name of Matthews, Yarmouth vital records.[3]

Anderson's main source for this entry was the Willard Genealogy [4] Esther Matthews, with no parents and no sourcing, is set up as the wife of the above Daniel Willard currently.

In the same series Vol 2 pg 842-843 we find Esther Unknown as the wife of William Hall (son of immigrant John), married to him by 1683 or possibly as early as 1675. Here Anderson lists a source of "The Ebenezer Hanks Story" by Kerry William Bates which does not seem to be available online. Anderson says this source lists a "possible" son Isaac who married in 1700 (pushing Esther's likely marriage date back to maybe 1675) and notes that the source "suggests" that Esther may have been a daughter of James Matthews apparently based on the fact that James' daughter Mehitabel married Benjamin Hall, brother of William Hall.[5]

Esther the wife of William Hall then appears in Mansfield (Connecticut) vital records as "Easter Hall, wife of Captain William Hall, d. 19 Feb 1726/27"[5] while Esther the wife of Daniel Willard died 28 Jun 1726 in Yarmouth, Massachusetts[6] and[4] in the same place her husband Daniel died in 1712.

More research on Daniel Willard and his wife Esther (apparently) Matthews probably needs to be done to resolve these uncertainties. The "Willard Genealogy" referenced by Great Migration may hold more clues.[4] It states authoritatively, but without detailed sourcing, that Esther was the daughter of James Matthews.

ask our community of genealogists a question.
Sponsored Search by Ancestry.com
DNA Connections
It may be possible to confirm family relationships with Esther by comparing test results with other carriers of her mitochondrial DNA. However, there are no known mtDNA test-takers in her direct maternal line. It is likely that these autosomal DNA test-takers will share some percentage (beta) of DNA with Esther: 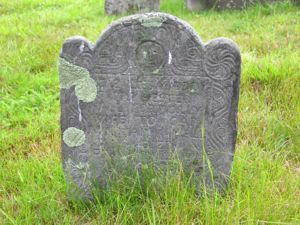 Brad Stauf
Anderson in Great Migration vol 2. p. 842 under the John Hall entry (father of this William) says that William married by 1683 Esther Unknown and notes that his original source (The Ebenezer Hanks Story) "suggests" that she was daughter of James Matthews who's other daughter Mehitable married William's brother Benjamin. HOWEVER the baptismal date of 8 Jan 1650/51 in Yarmouth for Esther Matthews daughter of James appears on vol 5 p.93 and says she was probably the one who married Daniel Willard in Yarmouth on 10 Aug 1695. So contradicting entries on spouses. The Esther-as-wife-of-Willard is already set up on wikitree with no parents or sourcing
posted Aug 23, 2019 by Brad Stauf

I believe Matthews 2476 and Mathews 96 are the same person, but someone will need to confirm which spelling of the last name was the last name recorded at birth so the merge can be to the right spelling.