Henri Emile Benoit Matisse was born 31 December, 1869 in Le Chateau-Cambresis in Nord-Pas-de-Calais, France to Emile Hippolyte Henry Matisse and his wife Anna Heloise Gerard. After the war 1870-1871 his family moved to Bohain-en-Vermaindois, France. Henri’s father was a successful corn merchant and his mother an amateur painter. Henri Matisse studied law 1887-1891and worked as a court administrator in Le Cateau-Cambresis.

Matisse first started to paint after his mother brought him art supplies while he was convalescing from appendicitis attack and discovered “a kind of paradise” much to the disappointment of his father.

In 1891 Matisse returned to Paris to study at the Academies Julian and studied under William-Adolph Bouguereau and Gustavo Moreau. Initially he painted still life and landscapes in a traditional style. In 1896 Matisse was introduced to Impressionism and the work of Van Gogh by Peter Russell when Matisse visited him whereupon Matisse’s style changed completely.

In 1898 Matisse went to London to study. In 1899 back in Paris he worked beside Marquette. Matisse went into debt buying works from painters he admired: Rodin, Gauguin, Van Gogh, and Cezanne. In 1906 Matisse met Pablo Picasso and they became lifelong friends and rivals. In 1917 he moved to Amiez on the French Riviera and his work for the next decade showed a softening of his approach.

Matisse was in Paris in 1940 when the Nazis invaded France but he made his way back to Nice. His son Pierre, owner of an art gallery in New York begged him to flee but he stayed in France because he didn’t want to appear to desert France.

In 1941, being diagnosed with cancer, the subsequent surgery and complications left him chair and bed bound. He turned to a new medium, creating cut paper collages.

Is Henri your ancestor? Please don't go away!

ask our community of genealogists a question.
Sponsored Search by Ancestry.com
DNA
No known carriers of Henri's DNA have taken a DNA test. 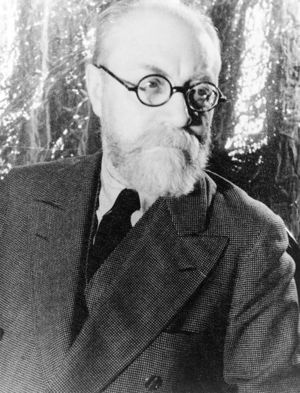 Isabelle (Rassinot) Martin
The French Roots project would be willing to co-manage this profile representing an important French notable.

Could you please add wikitree-french-roots at googlegroups dot com as manager? Please contact us if there are any questions or issues - Thank you !

Henri is 26 degrees from Jaki Erdoes, 23 degrees from Wallis Windsor and 24 degrees from Henry VIII of England on our single family tree. Login to find your connection.