Henry Matteson, emigrant ancestor, was born in 1646.[1] He was born in Præstevænge, Denmark to Frandtz Matteson and Elizabeth Wood.

In 1666/7, Henry immigrated to the British North American Colonies and settled in Rhode Island.[1]

They settled in East Greenwich, Rhode Island. On 12 June 1678, Henry took 100 acres of land that had been granted to John Pearce (mason), the Assembly permitting the transfer.[1]

Henry died about 1690 in East Greenwich.

Children of Henry and Hannah

I. HENRY^1 MATTESON, b. about 1646, said to be of Denmark, d. 1690, East Greenwich, R. I., where he appeared early. He m. Hannah Parsons, dau. of Hugh Parsons and Elizabeth, his wife, wid. of William English. Most of the name[s] in that vicinity are descended from him. No relation is traced between him and Francis Mattison, who, in 1657, June 2, 'was granted accommodation with a house lot among the rest of neighbors at the further end of Ship's Cove, in Providence. It is noticeable, however, that he named one of his sons Francis. In 1678, he took 100 acres that had been granted John Pearce (the mason), the Assembly permitting the transfer.

1684, Oct. 27, he testified, calling himself 38 years old, or thereabouts, that at the house of John Spencer, deceased, some time this last summer, did hear him say that he intended to give unto his son Michael the house and land the said Spencer lived upon.

1694, Apr. 19, Henry Matteson disclaimed 'any right or title to 10 acres lately sold by my mother Hannah to George Vaughn.’

August the ninth 1693 Charles Hazelton senior took Hanna Matteson to wife according to custom in her shift and noe other cloathing before Jane Sweete and Elizabeth Heath and were lawfully married the same day.
By mee John Heath conservator.

This record shows the survival of an old marriage custom by which the husband refuses to become responsible for any debts of his wife before marriage, or those of her former husband, if any.

Children of Henry and Hannah Matteson:

The back of the Henry Matteson memorial 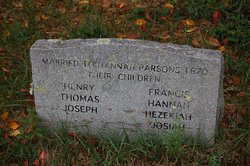