Mauritius was born in Cappadocia, the son of Paulus and his first wife. [2] Mauritius' parentage is confirmed by Theophanes, who names "Mauricius" and "Pauli patri sui", adding that Mauritius was 43 years old when he began his reign in 582, which would place his birth at about 539.

"Maurice was born in Arabissus in Cappadocia in 539, the son of a certain Paul. He had one brother, Peter, and two sisters, Theoctista and Gordia, who was later the wife of the general Philippicus. He is recorded to have been a native Greek speaker, unlike the previous emperors since Anastasius I Dicorus." [1]

Mauritius succeeded "Tiberio Augusto" to the throne as Emperor Mauritius on 13 August 582. [2]

"A prominent general, Maurice fought with success against the Sasanian Empire. After he became Emperor, he brought the war with Sasanian Persia to a victorious conclusion. Under him the Empire's eastern border in the South Caucasus was vastly expanded and, for the first time in nearly two centuries, the Romans were no longer obliged to pay the Persians thousands of pounds of gold annually for peace." [1]

"Maurice campaigned extensively in the Balkans against the Avars – pushing them back across the Danube by 599. He also conducted campaigns across the Danube, the first Roman Emperor to do so in over two centuries. In the west, he established two large semi-autonomous provinces called exarchates, ruled by exarchs, or viceroys of the emperor. In Italy Maurice established the Exarchate of Italy in 584, the first real effort by the Empire to halt the advance of the Lombards. With the creation of the Exarchate of Africa in 590 he further solidified the power of Constantinople in the western Mediterranean." [1]

"His reign was troubled by financial difficulties and almost constant warfare. In 602 a dissatisfied general named Phocas usurped the throne, having Maurice and his six sons executed. This event would prove a disaster for the Empire, sparking a twenty-six year war with Sassanid Persia which would leave both empires devastated prior to the Muslim conquests. His reign is a relatively well documented era of late antiquity, in particular by the historian Theophylact Simocatta. The Strategikon, a manual of war which influenced European and Middle Eastern military traditions for well over a millennium, is traditionally attributed to Maurice." [1]

Mauritius married (in 582, before 14 August), Constantina, daughter of Tiberios II and his wife Anastasia. [2]

Constantina was murdered in Chalcedon in 605 or 607 and buried in the Church of the Holy Apostles, Constantinople. [2]

Theophanes names "Charitonem et Constantinam" as the two daughters of "Tiberius" and his wife, adding in a later passage that "Constantina filia" married "Mauricio" who was declared "cæsar". [2]

During his final illness, the emperor Tiberius "initially named two heirs, each of whom was to marry one of his daughters. Maurice was betrothed to Constantina, and Germanus, related through blood to the great emperor Justinian, was married to Charito....On 14 August 582 Tiberius died and his last words were spoken to his successor:[26] "Let my sovereignty be delivered to thee with this girl. Be happy in the use of it, mindful always to love equity and justice." Maurice became sole emperor, marrying Constantina in the autumn." [1]

Mauritius was murdered in Chalcedon 27 November 602 and was buried in the Church of the Holy Apostles, Constantinople. [2]

Is Mauricius your ancestor? Please don't go away!

ask our community of genealogists a question.
Sponsored Search by Ancestry.com
DNA
No known carriers of Mauricius's DNA have taken a DNA test. 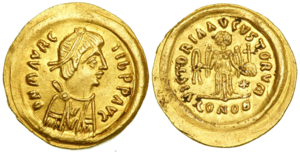